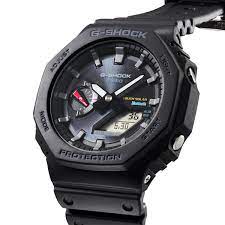 G-Shock Watches are indispensable items for use in the military. Those who have served in the armed forces are well aware that a watch serves first and foremost as a tool and not as an item of adornment. For instance, you can get large, hefty timepieces that are jam-packed with features. Watches that are highly resistant to the elements of the outdoor environment, specifically water, dust, mud, and shocks, are by far the most prevalent type of watch.

That is not to say that these watches are reserved solely for members of the armed forces; on the contrary, they are also an excellent choice for people who enjoy being outside, such as triathletes and hikers, as well as those who spend a significant amount of time working outside, such as construction workers. As a result, Casio has been a company that successfully caters to the needs of this specific market and has developed the G-Shock line.

These timepieces have been engineered to survive any and all conditions. They are dependable and can withstand any scratching, bumping, or knocking that may come their way. First and foremost, the G-Shock watches brand from Casio has an excellent reputation, and in light of this, the following is a list of recommendations that we have for you.

The G-Shock Rangeman is one of the chunkier options available from the company. It is among the largest watches that are now available. Having said that, there is a rationale for this. The dial incorporates a number of practical elements, the most notable of which is the solar cell, which enables the timepiece to function continuously without the wearer ever having to worry about the necessity of giving it a charge. There is a battery life indicator light for your peace of mind, and it is positioned smack dab in the center of the face so you can’t possibly miss it.

The hefty resin casing has dimensions of 55.2 millimeters by 18.2 millimeters. It can withstand temperatures as low as minus ten degrees Celsius and is resistant to water up to a depth of 200 meters.

In addition, after you have chosen your timezone, you will no longer be responsible for manually adjusting the time on your device. The watch will communicate with the closest Atomic Time transmitter, which maintains the most precise timekeeping system in the world (and we wrote an article on atomic watches here). More specifically, this watch is able to communicate with six different locations all over the world.

The interior of this watch features barometric pressure, temperature, altitude, direction readings, and a compass that is integrated right in. It has memory built-in, so whatever information you enter may be saved and retrieved at any point during the day. The controls are extremely user-friendly; they consist of a button on either side of the case that can perform various functions.

Another huge G-Shock, this one is measuring 51 mm by 14 mm (and, spoiler alert, this is the style they are going for). This would be an excellent choice for you if you came here in search of something that will be able to serve as a dependable clock in addition to its other duties. The three hands are driven by a quartz movement that powers it. The face of the clock itself is huge and very legible. In addition to this, there is an LED backlight that can assist with this in areas with inadequate lighting.

The face is an analog mechanism, but underneath those three hands and those large Arabic numerals (at the positions of 3, 6, 9, and 12), there are some complicated systems. For instance, a date window is located in the uppermost portion of the display. On the right, there is a complication that has six different functions that may be selected, and on the left, you can see a digital representation of the day of the week that is currently displayed.

In addition to a digital compass, this watch features a thermometer, stopwatch, countdown timer, complete auto calendar, and up to 5 alarms. It also displays time in both the 12-hour and 24-hour forms. All of this is available via the buttons on the side.

This watch can withstand circumstances such as mud and water up to a depth of 200 meters, making it suitable for use by military personnel.

On our rundown of the top G-Shock watches for the military, this particular model stands out as one of the most attractive options. Indeed, the black camouflage pattern seems to fit the bill perfectly.

This watch has a two-handed Quartz movement that is concealed under a resin case that is black in color and has a matching strap. In addition to that, beneath that, there are various subsections, each of which is presented in digital format. In this section, you will find a total of 31 timezones, the ability to set up to 5 alarms, a countdown timer for 60 minutes, and other features.

The dimensions of the casing are 51 mm by 16.9 mm. You receive those two side buttons with different functions, just like you would with any other G-Shock watch. Although it has high-quality construction, the watch is surprisingly easy to wear all day long due to its low weight and pleasant design.

In terms of its durability and sturdiness, this G-Shock model is a classic, but in comparison to the others in this collection, it is lacking in features. Even so, it has a combination of analog and digital timekeeping. Still, it does not offer any time zones or the other more advanced capabilities that the other watches in this collection have.

Why then is this one of the G-Shock watches that we recommend most highly for use in the military? Easy! There are some people who have no interest in purchasing a fancy watch. If you are only looking for something that is reliable, then this is an excellent option.

It utilizes a Quartz movement and has an analog display with two hands. You’ll be able to see that the minute hand has a gray accent, while the hour hand has a red one. In addition to this, places 3, 6, 9, and 12 are represented by Arabic numerals, but markers only indicate the remaining locations.

The display beneath the analog hands is of a slightly lower resolution than that of others on this list; nonetheless, a day and date window are still there. The more fundamental features include a stopwatch, an alarm, and support for two different time zones.

We are now at a model that does not contain any analog functions. This entirely digital, all-back model with a negative display is less obtrusive than the WR. However, it still provides great accuracy thanks to the Japanese Quartz movement that is included within.

The thickness of the case measures 47 millimeters by 30 millimeters. The dial is shielded by a mineral crystal that doubles as an anti-glare coating, making it an excellent choice for anyone who spends a lot of time outside. In addition to that, it contains a button that allows you to turn the screen’s illumination on and off should the lighting be inadequate.

This particular military watch lives up to the G-Shock brand’s reputation for including a plethora of advanced functions, which you should already be familiar with at this point. It comes equipped with a stopwatch, countdown timer, auto-date calendar, up to five alarms, and a smart function that can send your alerts. In addition to that, the battery life is a great seven years.

Because of these two distinguishing characteristics, this G-Shock watch is among the very best that the military can buy. Firstly, the technology is used for atomic timekeeping (remember where it can acquire an accurate time from one of the six worldwide atomic clocks?). The second feature is called Tough Solar, and it is a battery-recharging function that ensures the uninterrupted operation of the more power-hungry features. The wearers do not need to worry about the battery needing to be recharged (a full charge can last up to 10 months)

The watch can keep track of 29 different time zones, features up to five separate alarms, a countdown timer, an automatic calendar, and a feature that saves battery life. However, there is also an indicator showing the current battery level for your peace of mind. Oh, and a rear illumination system.

It features a resin casing and band, making it thinner than the other options on our list; happily, this overcomes any problems that may have been caused by the buttons being too stiff.

It is recommended that you give the Casio G-Shock G9000 a shot if you are interested in purchasing a traditional military watch that falls within an affordable price range. This is the first iteration of the Mudman watch, and it is also the model that most people consider to be the most aesthetically pleasing.

On Amazon, you can purchase this watch for a price that is roughly 110 dollars.

Even though it does not come with advanced capabilities, the G9000 provides the essentials and has a design that is exceptionally long-lasting. Because of its “extra-rugged” structure, it is capable of withstanding any training exercise or drop. This watch’s “military concept” design demonstrates that it is tailored to meet the needs of all service members currently in existence.

This watch comes equipped with a hands-free backlight, a dedicated front backlight button, and a button sound mute. All of these features can be found on the face of the watch. Even though this watch doesn’t have any complicated features, it’s nonetheless a popular choice among military personnel because of its rugged construction.

If the model has a name like “Mudman,” shouldn’t that be enough to tell you why it’s on the list of the greatest G-Shock watches for those who serve in the military?

This mud-resistant watch features sealed buttons, a scratch-resistant crystal lens, and a stainless steel bezel to shield the Japanese Quartz movement inside from any mud, grime, or dust that may get on it. The dimensions of the casing are 45mm by 15mm.

In addition, it features the Tough Solar feature that we were talking about in the earlier model, a digital compass, moon phases, and it will monitor the temperature of the surrounding environment. In addition to this, it features up to five alarms, a stopwatch, an automatic calendar, 12-hour and 24-hour time formats, and 31 different time zones. In addition to that, it features a backlight.

The buttons do require a bit of a push, but other than that, the watch itself is really user-friendly. This is something we’ve discussed before as a common issue.

Are you interested in purchasing a Casio G-Shock watch? It sounds like the Mudmaster is the right fit for you. This is the flagship timepiece for the watch store, and it belongs to the exclusive “Master of G” family of timepieces. Perfect for any and all military applications.

This particular G-Shock watch is one of the most long-lasting models available since it combines a strong design with a sturdy exterior. It should come as no surprise that this watch is well-liked by members of the armed forces as well as those who work in police enforcement.

This watch also has a hands-free backlight, a dual sensor, an analog compass, extra mud resistance, dust resistance, vibration resistance, and global time options. All of these features may be accessed without having to use your hands.

Atomic time and a solar battery are two features that are sadly absent from the G-Shock Mudmaster GG1000-1A5 watch. Choose the Mudmaster GWG-1000 if you want a G-Shock model that runs on solar energy; however, keep in mind that this model will cost you twice as much as a GG1000-1A5 version.

G-Shock is the ideal watch brand for the military since its timepieces are dependable, long-lasting, and resistant to the various environments that service members are exposed to on a daily basis.