A Comprehensive Review of the Garmin Forerunner 945 LTE 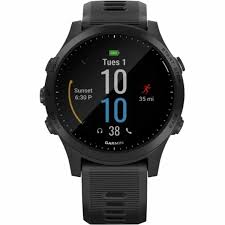 Functions that guarantee a safe environment

The conclusion of my time with the Garmin Forerunner 945 LTE

In conjunction with the recent launch of the brand-new Forerunner 55, Garmin has made available the Forerunner 945 LTE. Now, there are situations in which you could find it advantageous to be able to request assistance without having to use your phone.

This watch version is nearly indistinguishable from the first edition, except for the LTE function that enables you to contact the emergency services and the SOS contacts you have chosen and provide them with your location.

Additionally, it will provide real-time updates on your whereabouts to the people you choose. This feature may come in handy in happier circumstances, such as when you are competing in a race. During the time that you are out running, your friends may send you encouraging text messages and voicemails.

The Garmin Forerunner 945 LTE is a really good piece of equipment when it comes to providing safety so far.

Last week, at the beginning of June, the Forerunner 945 LTE was made available in black or white and sold for close to $650. It will initially be available in the United States and Canada, and very soon after that, it will become available to the rest of us.

There is, of course, no use in obtaining the LTE model if you do not intend to use it; the cost of this service is approximately $6 per month for an annual membership and $7 for a month-to-month subscription.

It has a round face with two buttons on the right-hand side and three buttons on the left-hand side. There is not a touchscreen, but this is typical for Garmin running watches, so it is not a drawback. Backlighting and transflective technology, which takes advantage of the sunshine to enhance the display organically, are both integrated into the 1.2-inch display. It ought to be possible for you to see the screen even on the sunniest of days.

Because everything is accomplished through the clicking of buttons, Garmin prioritizes providing customers with an experience that is as user-friendly as possible; yet, there is a learning curve.

You can access a single menu screen with settings such as “Do Not Disturb,” “LTE,” and “Sync” by pressing and holding down the backlight button for about a second.

When the display shows a widget, you can access a menu to modify that widget by pressing and holding the center button on the left side of the device. You can also scroll down for additional general settings.

Functions that guarantee a safe environment

Other models of Garmin include equivalent safety features, but in order to connect to the internet, they need to be in close proximity to a smartphone.

To quickly activate an alarm, press and maintain pressure on the lighting button, then wait for three beeps to sound. Depending on the mode (Assistance or Assistance), you have the option to either inform personal contacts or the commercial monitoring service.

Assistance Plus will notify the International Emergency Response Coordination Center of Garmin, which will then contact the appropriate authorities on your behalf. It is only possible to activate or deactivate it through the Garmin app on your mobile device. The IERCC representative will remain in contact with the group through the use of the Forerunner until assistance arrives.

Text is the only form of communication supported by the Forerunner 945 LTE, in contrast to the Apple Watch’s Emergency SOS capability, which makes use of both speech and text.

The United States, New Zealand, Canada, France, Spain, Germany, Switzerland, Belgium, Norway, Denmark, the Netherlands, Singapore, and Taiwan are among the countries that are covered by Assistance.

You need to be within an LTE coverage area in order for the 945 LTE, just like any other smartphone, to send out a help request. Therefore, you are not completely invincible. Don’t forget that!

There aren’t many other things you can do with it besides talking with friends or emergency services via its LTE radio: In contrast to the Apple Watch 5 LTE, the Apple Watch 6 LTE (and other LTE smartwatches) do not allow users to send or receive text messages or make phone calls when they are moving around (or similar). You are unable to use services like Spotify or download applications from third-party developers.

If you want only one person to be aware of your runs, you can use LiveTrack to send that person automatic notifications on time elapsed since your last lap, your pace, and your speed. These messages can be delivered to a maximum of 5 recipients at a time. On the other hand, if you know five other individuals interested in the topic, you have a wonderful group of pals.

Some of these connections may send you voice messages and text messages to encourage you while you’re running, which could boost your motivation

The Forerunner 945 LTE is quick and accurate from the very beginning of its operation. On the very first try, receiving a GPS signal typically takes fewer than sixty seconds.

Turn off the Assistance Plus and go through a mock run in order to evaluate the various safety features. Press and hold the button for approximately four seconds to turn the backlight on. The watch will vibrate and then start a countdown for five seconds before sending an emergency text message to the person of your choice. Someone in that position can get the text message in a fraction of a second and respond to it by text message.

You can select one of three pre-programmed messages or write your own using the virtual keyboard that is displayed on the screen. Because you have to scroll to select individual characters and there is no automatic spelling correction, this can be a time-consuming and annoying process.

Using the LTE signal will decrease the amount of time that the battery will last. As opposed to the older model of the Forerunner 945, which could play music and GPS for up to 10 hours, the newer model of the Forerunner 945 LTE can only play music, GPS, and LTE for up to 7 hours. The battery life in GPS mode with only the music playing is approximately 12 hours. However, the battery life in GPS mode without the music playing can be up to 35 hours.

Many of Garmin’s watches with an emphasis on fitness come equipped with smartwatch-like features and are akin to Fitbit Sense in this regard. The Forerunner 945 LTE comes equipped with built-in music storage for Deezer, Spotify, and Amazon Music and support for NFC payments and smartphone notifications. ConnectIQ gives you the ability to download different watch faces and apps, but the overall experience is not comparable to what you get with an Apple or Wear OS wristwatch.

The conclusion of my time with the Garmin Forerunner 945 LTE

The Forerunner 945 LTE should serve as a sobering reminder, particularly to women, that they should always take safety measures. The Forerunner 945 LTE is unable to protect women from being harassed or assaulted in its current state. Nevertheless, it offers some degree of protection by enabling the runner to rapidly get in touch with a loved one or the necessary emergency services if required.

However, the price for this level of safety is quite significant. The Garmin Forerunner 945 LTE has a price tag of approximately $650 and an additional $5 per month for the LTE connection.