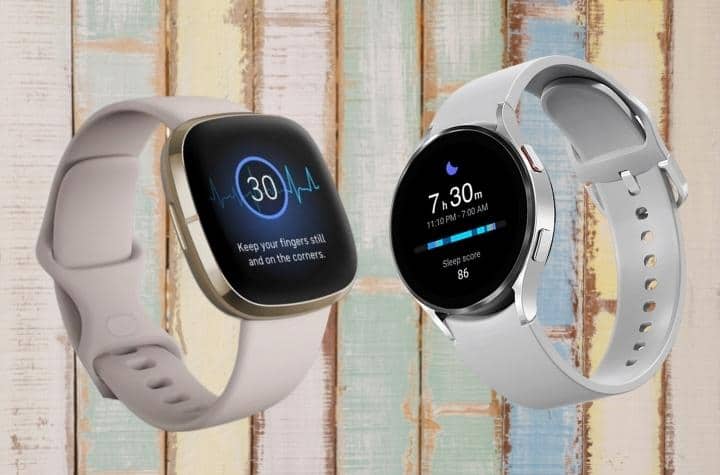 Presented here are the watches

Monitors for Your Health and Fitness

We have analyzed the most important aspects of both smartwatches so that you can choose the one that will work best with your lifestyle. Continue reading to learn more about what sets these watches apart, including which features are better for your health and which ones offer superior day-to-day applications.

Presented here are the watches

Have trouble visualizing what each watch looks like? Before we get into the specifics of the capabilities offered by each wristwatch, let’s begin with a brief overview.

The long-awaited Galaxy Watch 4 is an upgraded model that was introduced on the 26th of August by the global technology leader Samsung. This watch falls in the middle of the pricing spectrum for smartwatches, coming in at roughly $249.99. We’ll be shocked if you haven’t heard of this popular watch before, as the Galaxy Watch has already amassed a cult-like following among watch enthusiasts.

Even though the Fitbit Sense was first introduced on August 25, 2020, making it an older watch, you shouldn’t allow that fact to fool you into thinking that it’s not up to date with modern technology. This watch typically comes with a warranty of one year and may be purchased for the retail price of $299.95.

When examining smartwatches, a variety of shared characteristics may be contrasted. These aspects include the watch’s appearance, as well as its fitness and health monitors, as well as its battery life, and cost. Here is a comparison of the features found on the Galaxy Watch 4 and the Fitbit Sense!

The Galaxy Watch 4 maintains its recognizable rounded appearance, which alludes to the contours of more conventional watches. This is a clean and simple design that works well with a variety of aesthetics. Many people choose this watch over bulky smartwatches and conventional clocks because of its more fashionable appearance. They favor it over these options.

Additionally, to make the Galaxy Watch 4 as simple as possible, Samsung equipped it with two buttons on the side and a bezel made of stainless steel. One feature that is missing from the design, though, is a bezel that can rotate.

The Fitbit Sense, in contrast to the round design of the Galaxy Watch 4, has a rectangular shape. Even though many smartwatches have square shapes, the Fitbit Sense manages to pull off the design in an attractive and functional way. The frame and dial of this fitness watch are both made of aluminum, providing the watch with additional detail.

Each watch has an AMOLED display that is covered by a protective glass layer. Users who wish to be able to read their watch while they are moving around will find that the display on these watches, which is “always on” and easy to read in sunlight, is ideal for them.

Monitors for Your Health and Fitness

Having access to sophisticated health and fitness trackers is a primary motivation for many people to get a smartwatch. Both the Fitbit Sense and the Galaxy Watch 4 come equipped with some of the most cutting-edge capabilities currently available on the market. These capabilities include built-in GPS, heart rate monitors, accelerometers, sleep sensors, distance trackers, calorie counters, step counters, and more.

The Fitbit Sense is equipped with a number of sophisticated health trackers, including skin temperature sensors, ECG monitors, and stress management tools, amongst others. The watch also includes a feature called “Active Zone Minutes,” which is a function that calculates the amount of time you spend engaging in active cardio movements. Users who are interested in closely monitoring their performance will find this premium option to be extremely useful.

Galaxy Watch 4 by Samsung has a one-of-a-kind feature: The BIA or The Bioelectrical Impedance Analysis. This function can determine the amounts of water and oxygen currently present in the user’s body. The watch also comes equipped with a BioActive sensor that monitors the wearer’s body composition in real time. This function is ideal for individuals who are interested in achieving their fitness objectives. This technically advanced smartwatch comes equipped with a variety of capabilities, including sports modes, SpO2 sensors, and more.

Given that both watches are high-performing smartwatches, it should be no surprise that their respective battery lives are comparable. The fact that modern Smartwatches come with a wide variety of functions usually results in lower battery life because more power is required to keep those functions running. Don’t let the lower life spans of the batteries discourage you from purchasing one because the functionality and AMOLED panels more than makeup for it.

The Samsung Galaxy Watch 4 has a battery life of around two to three days on a single charge. On the other hand, according to some studies, this time frame might be reduced to as little as one day if GPS and other apps are utilized. On the other hand, the Fitbit Sense has a battery life that can last up to 6 days on a single charge; however, due to the GPS functions and the “always-on” display, this estimate is subject to change.

As was indicated earlier, both watches fall within the mid-level price range; nevertheless, the greater price reflects the luxury watch features that are included.

The Fitbit Sense has a suggested retail price of $299.95, making it the most costly model offered by Fitbit. However, remember that this pricing comes with a variety of particular and unique features that are helpful for people interested in fitness. You can acquire the Galaxy Watch 4 for a price of $249.99, but if you want enhanced LTE features as well, you should get the Bluetooth watch instead, which costs $329. In addition, the “Classic” model of the Galaxy Watch 4 is available for purchase. A model that supports LTE may set you back as much as $429.

Please take note of the following additional characteristics and contrasts!

It can be difficult to choose between the Samsung Galaxy Watch 4 and the Fitbit Sense. Both watches are offered at prices that are comparable and contain a number of functions that are interchangeable between the two. If you are looking for a health tracker, the Fitbit Sense is a fantastic option to consider, but the Samsung Galaxy Watch 4 is a superior choice for sporting activities that take place outside. Regarding the capabilities of regular smartwatches, the Galaxy Watch 4 has a few additional apps and faces, but the decision ultimately comes down to your spending limit and personal taste.