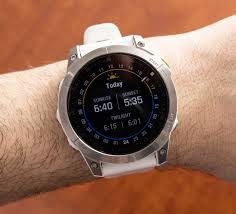 “Epix display will now never switch off when on the wrist,” reads the upgrade to the software that is currently being rolled out. Given that Epix 2 is marketed as a watch that has an always-on display, the meaning of this remark may not be immediately clear to certain readers. Just what is going on here?

The problem is that customers have been reporting that the display on their watch would sometimes completely turn off when the watch was being worn on the wrist (this is after the expected dimming). Here is a link to a thread in the Garmin forums that discusses the problem.

The fact is, the software that was placed on the very first batch of Epix 2 watches did not have a problem with this (version 6.57). In fact, the screen did not turn off by itself. With the release of firmware version 7.2, the dispute began.

One of the issues was that the release notes did not mention a new function that shut off the watch after one minute had passed without the user actively interacting with it. This was a contributing factor to the problem. This strategy aims to keep the battery life continuing for a longer period of time or even to burn in the display. The justification is unclear to us at this point.

That led to a great deal of confusion and a topic that was 14 pages long on Garmin’s support boards. Users were under the impression that their watches were broken or that there was a glitch, but in reality, the watch was functioning just as it was designed to. The expectations of Garmin’s users were not met by the company’s interpretation of the term “always-on.” The users had the presumption that the always-on display mode would not intend for the display to be completely turned off and that this would only occur in the gesture mode.

The good news is that this issue has been rectified in firmware release 7.24. When worn on the wrist, the display will not actually turn off any longer. Always-on truly does mean constantly on. The sole requirement is that you use a watch face designed by Garmin and not one designed by a third party.

The following is a list of other software upgrades that are included with this release (many of these are presently being rolled out to Fenix 7 as well - firmware version 7.24).

The Epix 2 clock shines brightest because of its brilliant AMOLED display. Therefore, it is to everyone’s advantage that Garmin has now aligned its concept of “always on” with what users anticipate! Let’s keep our fingers crossed that this won’t shift.