Collaboration between Apple and Stanford Medicine on a Heart Study 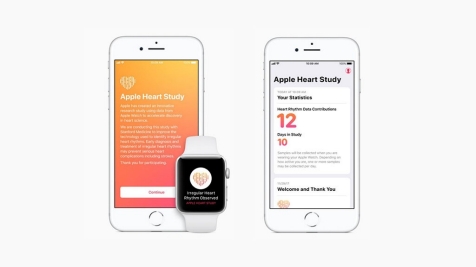 The study that was conducted by Apple and Stanford Medicine

The diagnosis of diseases

A cursory examination of the results

The Final Word on the Apple Heart Study

What this signifies for the future of technologically advanced timepieces

The smartwatch is probably the piece of wearable intelligent technology best known to the general public. Since the introduction of smartwatches, there has been an increased emphasis placed on biometrics in various healthcare applications. In addition to this, they have emerged as an essential tool for surveillance, particularly during the COVID-19 pandemic. The question now is, what exactly is the Apple Heart Study?

The accessibility of smartwatches has substantially advanced in recent years, which has contributed to the industry’s expanding demand.

There has undoubtedly been a significant amount of research conducted that investigates the expansion of the smartwatch market. In addition, the adoption patterns of smartwatches in medical applications and the product strategies of industry leaders like Apple, Samsung, and Google will be discussed.

Apple and Stanford Medicine are well-known worldwide as leaders in their respective industries. As a consequence of this, Apple and Stanford collaborated in 2019 to simplify the process of client participation in medical research. They were aware that new data collection could result in discoveries that could save lives. As a direct consequence of this, abnormal heart rhythms can now be detected earlier. This indicates that you have a greater chance of avoiding more significant health problems.

The study that was conducted by Apple and Stanford Medicine

With almost 400,000 participants in just eight months, the Apple Heart Study is the most extensive digital research project ever conducted.

Atrial fibrillation is a severe medical ailment that is frequently misdiagnosed because it is difficult to detect. Wearables like the Apple Watch could aid in the diagnosis process. Mintu Turakhia, an associate professor in the department of cardiovascular medicine, made the observation. These significant findings establish the groundwork for future studies into implementing new wearable technologies in clinical practice and demonstrate the exceptional potential of large-scale app-based investigations.

Professors of medicine and biomedical data science, Urakhia and Manisha Desai, respectively, hold a Ph.D. and are the senior authors of the previous research. In this investigation, Dr. Marco Perez, who is also an associate professor of cardiovascular medicine, is serving as the primary investigator. Professor of cardiovascular medicine and researcher Dr. Kenneth Mahaffey serves as the study’s chair.

The diagnosis of diseases

Researchers at Apple, Inc. started a study in November 2017 to see if the Apple Watch could identify atrial fibrillation by analyzing data from the watch’s heart-rate pulse sensor. The study was designed to see if the watch could detect the irregular heartbeat that is caused by atrial fibrillation. One of the most prevalent types of arrhythmia is called atrioventricular block, and it affects up to 6 million people in the United States.

Patients who have an irregular pulse are given an electrocardiography (ECG) patch, which is worn for seven days and continually monitors the heart’s electrical impulses. During the trial, only 0.52 percent of patients were informed that something was wrong with their pulses. Concerns about sending too many notifications to healthy persons have been displaced.

After being notified and tracked by an ECG patch for a period of two weeks, 34 percent of those who had atrial fibrillation were able to receive a diagnosis. Due to the transient nature of atrial fibrillation, it is doubtful that the condition will be missed by ECG patch monitoring. According to a comparison of irregular pulse identification on the Apple Watch and simultaneous ECG patch recordings, the pulse detection algorithm has an 84 percent positive predictive value. This was determined by analyzing the data from both devices simultaneously.

During the ECG patch monitoring, the participants’ Apple Watches indicated that they were experiencing irregular pulses. If a participant’s pulse was irregular, atrial fibrillation was verified by the accompanying ECG patch at 84 percent. As a consequence of this, Perez thinks the algorithm used in the Apple Watch can detect atrial fibrillation. The results of this investigation might have an impact on future clinical studies.

According to the study’s findings, electronic health notifications may also facilitate increased patient participation in healthcare systems. Because of an unusual occurrence that their Apple Watch picked up, 76% of participants called either the telehealth provider or a non-study practitioner, which indicates that they sought medical assistance.

As the number of app-based health studies increases, it will be necessary to devise new techniques for enhancing the quality of self-report data and the level of involvement of participants.

The one-of-a-kind understanding of patient involvement and intervention acquired through the course of the study will greatly assist the planning of the research that will be conducted in the future. Because the research was conducted entirely online, there was no requirement for participants to be physically present at any point during the process. As a result, an ambitious recruitment strategy could be executed in a comparatively short amount of time. Because the screening was accomplished through the usage of the application, the research was also scalable at a relatively low additional cost.

All participants are required to own both an iPhone and an Apple Watch (Series 1–3) to participate in the study. Although the Apple Watch Series 4 and 5 are equipped with an ECG, they were not considered for inclusion in this study because they were released after the research was well underway.

When you accessed the Apple Heart Study app, the heart-rate pulse sensor checked to see if it had received any unusual signals. In the event that an irregular pulse was identified, American Well made the offer to schedule a telemedicine consultation with one of the study’s participating physicians. Participants in the study were given ECG patches by BioTelemetry so that the company could record their heart rhythms for up to a week.

A cursory examination of the results

The Final Word on the Apple Heart Study

The performance and accuracy of the study provide vital information that can be used in analyzing the impact that the healthcare system has on wearable technology. According to the Apple Heart Study findings, having atrial fibrillation is just the beginning. There is a possibility that more topics relating to preventive medicine will be discussed. People will be able to make better judgments regarding their health if there is a greater emphasis on research.