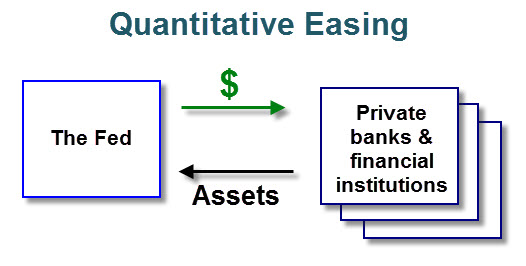 What Is Quantitative Easing (QE)?

Other Ways QE Stimulates the Economy

QE Could Lead to Inflation

QE Around the World

QE in the United States

When did quantitative easing begin?

The Federal Reserve employs quantitative easing as a strategy to boost the economy during economic downturns. Long-term interest rates are decreased and the money supply is increased.

What Is Quantitative Easing (QE)?

A central bank engages in quantitative easing (QE) when it purchases long-term securities from its affiliate banks. The central bank injects new money into the economy by purchasing these securities; as a result of the influx, interest rates drop, making it simpler for people to borrow.

The Fed’s open market operations are expanded through the use of quantitative easing (QE), which is how it affects the money supply. Lowering interest rates is another tactic; the Fed utilizes QE after bringing the fed funds rate to zero. (All other short-term rates are derived from the Fed funds rate.)

The Federal Reserve provides its member banks with cash in return for assets like bonds when it purchases securities from them. The additional funds can then be lent out.

The amount of money that banks are required to have in reserve relative to the amount they give out is likewise under the Fed’s supervision. By reducing the reserve, banks are able to extend additional loans. Falling interest rates are made possible by a rise in the amount of money flowing out into the economy. Lower interest rates encourage borrowing and spending, which boosts the economy.

Any deposits beyond the bank’s reserves are lent. After that, these loans are deposited in other banks. They lend the remaining 90% and only hold 10% in reserves. That is how $10 trillion in economic expansion can result from $1 trillion in Fed credit.

After the financial crisis of 2008, the Fed utilized quantitative easing to stabilize the financial markets. Following the financial repercussions of the COVID-19 pandemic in 2020, the Fed once more relied on QE, increasing its balance sheet to $7 trillion.

Other Ways QE Stimulates the Economy

To fund its expansionary fiscal policies, the federal government auctions off significant amounts of Treasury securities. Demand increases as the Fed purchases Treasurys, keeping Treasury rates low (with bonds, there is an inverse relationship between yields and prices).

All long-term interest rates are based on the value of the Treasury. As a result, quantitative easing through the purchase of Treasurys also maintains a reasonable rate of the vehicle, furniture, and other consumer debt. Long-term debt with fixed interest is the same. Low mortgage rates help to boost the housing market. Low-interest rates on corporate bonds make business expansion feasible.

The value of the nation’s currency is kept low by expanding the money supply. Foreign investors are more drawn to American stocks when the dollar is weaker because they may receive more for their money. Additionally, it lowers the price of exports.

QE Could Lead to Inflation

The Fed’s holdings of Treasurys and other securities are growing as a result of QE, which is the lone drawback. For instance, the Fed’s balance sheet contained less than $1 trillion prior to the 2008 financial crisis. This amount rose to over $4.5 trillion by July 2014.

Some analysts are concerned that QE may lead to hyperinflation or even inflation.

The value of existing dollars decreases when the Fed prints more money. As a result, all monies lose value over time and become less valuable. It leads to inflation.

Before there is inflation, the economy must be doing well. As soon as that occurs, the assets recorded by the Fed also grow. Selling them wouldn’t be a problem for the Fed. Selling assets would decrease the amount of money in circulation and curb inflation.

QE Around the World

From 2001 to 2006, the first nation to employ QE was Japan. Shinzo Abe’s appointment as prime minister in 2012 served as a catalyst for its revival. With his three-arrow “Abenomics” program, he promised to restructure the Japanese economy.

After seven years of austerity measures, the European Central Bank implemented QE in January 2015. It consented to buy 60 billion in bonds denominated in euros, devaluing the euro and boosting exports. That amount was raised to 80 billion euros monthly. It stated in December 2016 that it would reduce its monthly purchases to 60 billion euros starting in April 2017. In December 2018, the initiative came to an end.

QE in the United States

The Fed started four rounds of QE in 2008 to combat the financial crisis. From December 2008 to October 2014, they existed. Because its previous instruments for expanding monetary policy had run out, the Fed turned to quantitative easing (QE). Both the discount rate and the Fed funds rate were 0. In order to satisfy banks’ reserve requirements, the Fed even started giving them interest. As a result, quantitative easing was adopted by the central bank as its main crisis-resolution strategy.

QE increased the money supply and the Fed’s balance sheet by over $4 trillion. Its expansion was the biggest in the history of economic stimulus programs through 2020. From less than $1 trillion in November 2008 to $4.4 trillion in October 2014, the Federal Reserve’s balance sheet more than doubled.

The Federal Reserve purchased $1.25 trillion in MBS as of February 24, 2010. It also purchased longer-term Treasury securities worth $700 billion, including 10-year notes.

The Fed has a limitless capacity to generate funds to pay off any bad debt, despite some experts’ concerns that the enormous quantity of toxic loans it has on its books may cause it to collapse like they did the banks. In addition, it might hold onto the loan until the housing market stabilized.

The Fed declared on November 3, 2010, that it would boost its purchases through QE2. By the conclusion of the 2011 second quarter, it would have spent $600 billion on Treasury securities. In doing so, the Fed would keep its assets at $2 trillion.

Some investors began purchasing Treasury Inflation-Protected Securities out of concern that QE might lead to hyperinflation. Others began purchasing gold, which is a common inflation hedge. By August 2011, gold prices had reached a record high of $1,917.90 per ounce as a result of this.

The Federal Reserve began “Operation Twist” in September 2011. With two exceptions, this was comparable to QE2. First, the Fed purchased long-term notes as its short-term Treasury bills came to an end. Second, the Fed increased its MBS purchases. Both of these “twists” were intended to help the weak housing market.

The Fed announced QE3 on September 13, 2012. In order to sustain Operation Twist and provide a total of $85 billion of new liquidity per month, it pledged to purchase $40 billion in MBS. The Fed also carried out three other novel actions:

The Fed announced QE4 in December 2012, thereby ending QE3. It planned to purchase MBS and long-term Treasury bonds for a combined $85 billion. Instead of just renewing the short-term debt, Operation Twist was terminated. It made a commitment to maintaining buying securities until either of two criteria—unemployment falling below 6.5 percent or inflation rising above 2.5 percent—was reached to make clear its direction.

Some commentators believed that QE4 was merely a continuation of QE3. Because it had no set termination date, some people called it “QE Infinity.” Cheaper loans, lower property costs, and a devalued dollar were made possible by QE4.

The FOMC said on December 18, 2013, that it will start to reduce its purchases since its three economic goals had been reached:

Through 2015 and into 2016, the FOMC would maintain the discount rate and Fed funds rate at or below 2 percent. The FOMC declared it had completed its final purchase on October 29, 2014. In order to keep its holdings at certain levels, it would continue to replace these securities as they become available.

The FOMC said on June 14, 2017, that it would start to reduce its QE holdings and let $6 billion in Treasury bonds mature each month without replacing them. Up until it had retired $30 billion per month, it would let another $6 billion mature each month after that. Similar steps would be taken by the Fed with regard to its holdings of mortgage-backed securities. Up until a threshold of $20 billion was retired each month, it would retire an additional $4 billion each month. It started selling off its assets in October 2017.

The COVID-19 epidemic prompted the most recent usage of QE. The Federal Reserve stated on March 15, 2020, that it would buy $500 billion worth of US Treasury bonds. Over the next months, it would also purchase mortgage-backed securities worth $200 billion.

The FOMC increased QE purchases to an unlimited amount on March 23, 2020. Its balance sheet reached $7 trillion by May 18. Jerome Powell, the chair of the Fed, stated that he was unconcerned about the expansion of the Fed’s balance sheet. 26 The Fed is allowed to hold onto any assets until they mature because there is no problem with inflation.

While QE failed to fulfill some of its objectives, it did inflate some asset bubbles. Toxic subprime mortgages were first removed from bank balance sheets, rebuilding customer confidence and, as a result, banking operations. Second, it assisted in stabilizing the American economy by giving people the resources and the assurance they needed to escape the crisis.

Thirdly, it maintained interest rates at a level that allowed the housing market to recover. Because of this, QE1 was successful in bringing down interest rates by nearly a whole percentage point.

Fourth, it encouraged economic growth, albeit perhaps not to the extent that the Fed had hoped. Banks received the money from it, but they kept the money in reserve. Banks tripled the value of their stock through dividends and stock buybacks instead of lending out the money.

Despite what many had expected, QE didn’t lead to widespread inflation. But by making money so inexpensive, it did contribute to asset booms. An asset bubble is the fast rise in price of an asset, such as real estate, which is not supported by the asset’s intrinsic value. For instance, the QE-fueled housing bubble drove up property prices, but such prices were unrelated to the homes’ true worth.

When did quantitative easing begin?

As part of “Abenomics,” Japan launched quantitative easing in 2001. Up until 2006, the Bank of Japan set an inflation target of 2 percent and bought assets to meet it.

Bond yields are decreased through quantitative easing. The yields decrease when bond prices increase. 28 The balance of supply and demand changes and prices rise when there are more buyers than sellers. Quantitative easing raises bond prices and lowers bond rates by utilizing the collective purchasing power of an entire government.