Financial Derivatives: Definition, Types, and Risks of it 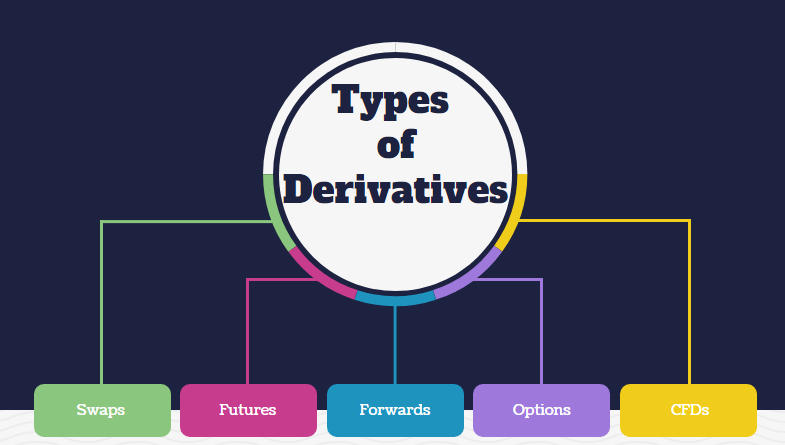 What is it about derivatives that makes them so dangerous?

The Trading of Derivatives

The Various Forms That Financial Derivatives Can Take

The Four Dangers Involved with Derivatives

What exactly are digital currency derivatives?

What other kinds of stock derivatives are there?

What is it about derivatives that makes them so dangerous?

A derivative is a type of financial contract that obtains its value from another asset that serves as its underlying source. The buyer commits to making the purchase of the asset on a particular date and at a particular price.

Commodities such as oil, gasoline, and gold are frequently traded with the help of derivatives. Another type of asset is currency, most often the United States dollar. There are financial instruments that are derived from stocks and bonds. Others look at things like interest rates or the yield on a 10-year Treasury note.

The seller of the contract is not required to hold ownership of the underlying asset. They are able to satisfy the terms of the contract by providing the buyer with sufficient funds to enable the buyer to purchase the asset at the price that is currently in effect. They also have the option of providing the buyer with a second derivative contract that reduces the value of the initial transaction. Because of this, trading derivatives is significantly simpler than trading the asset itself.

The Trading of Derivatives

Derivatives are used to mitigate risk by the majority of the world’s 500 largest firms. For instance, a futures contract makes a commitment to deliver a certain quantity of raw materials at a predetermined cost. If prices continue to climb in this manner, the corporation will be safe. Also, businesses make contracts to protect themselves from changes in interest rates and exchange rates.

The number of future cash flows can be more accurately forecasted thanks to derivatives. They make it possible for businesses to generate more accurate earnings projections. Because of this predictability, stock prices go up, and as a result, firms require a reduced quantity of cash on hand to cover unexpected expenses. This means that they have more capital available to put back into their company.

Hedge funds and other types of investors do the majority of the trading in derivatives in order to increase their leverage. To pay for derivatives, all you need is a small down payment. This is called “paying on margin.”

Before their terms are reached, many contracts for derivatives are either offset or liquidated by contracts for other derivatives. These traders don’t give a second thought to whether or not they have sufficient funds to pay out the derivative if the market swings against them. If they are successful, they get their money.

“Over-the-counter” options are a type of derivative that is traded between two companies or traders who already have a personal relationship with one another. They are also exchanged via an intermediary, which is typically a large financial institution.

Only a fraction of the world’s derivatives are traded on the many exchanges throughout the globe. These public exchanges are responsible for standardizing the terms of the contracts. They detail any premiums or reductions that will be applied to the total price of the contract. The derivatives market is made more liquid as a result of this standardization. Because of this, they will be easier to trade, which will make them more useful for hedging.

Exchanges may also function as clearinghouses, in which case they would purchase or sell derivatives in their own capacity. Because of this, there is reduced risk for traders because they are aware that the contract will be honored. The Dodd-Frank Wall Street Reform Act was passed into law in 2010 as a direct response to the global financial crisis and as a measure to curb excessive risk-taking.

The CME Group, which is the result of the merger between the Chicago Board of Trade and the Chicago Mercantile Exchange (commonly known as CME or the Merc), is the largest exchange in the world. It engages in the trading of derivatives across all asset classes.

The Various Forms That Financial Derivatives Can Take

Collateralized debt obligations are the derivatives that have gained the most notoriety. CDOs were one of the key factors that led up to the financial crisis of 2008. 4, These are bundles of debt, such as vehicle loans, credit card debt, or mortgage debt, that are then turned into a security that is valued depending on the repayment that is pledged for the loans.

There are two primary categories, namely: Asset-backed commercial paper is an investment product that is backed by the debt of corporations and businesses. Mortgages serve as the underlying asset for mortgage-backed securities. The value of MBS and later ABCP fell precipitously in 2006, along with the overall collapse of the housing market. 5

A swap is the most typical form of a derivative that is used. This is an agreement to swap one asset or debt for another that is of a comparable nature. The goal is to make the situation safer for both of the involved people. Most of them are made up of either swap of interest rates or swaps of currencies.

To hedge against currency risk, a trader might, for instance, sell stock in the United States and then acquire the same stock in a different currency. Since they are exchanged over the counter, you won’t find them on any exchange. A corporation may decide to exchange the coupon stream of a bond that has a fixed rate for the payment stream of another company’s bond that has a variable rate.

The credit default swap was the most notorious example of one of these swaps. They also contributed to the financial catastrophe that occurred in 2008. They were put up for sale as a form of protection against the possibility of municipal bonds, corporate debt, or mortgage-backed securities going into default.

As a result of the collapse of the MBS market, there was insufficient capital available to pay off the CDS holders. The American International Group had to be taken over by the federal government and nationalized. As a result of the Dodd-Frank Act, the Commodity Futures Trading Commission (CFTC) is now in charge of swaps.

Another type of OTC derivative is called a forward. They are agreements to acquire or sell an item at a specified date in the future at a price that has been agreed upon by both parties. The two parties have a lot of leeway in terms of personalizing their letters. Forwards are a type of contract that can be used to hedge risk in a variety of markets, including commodities, interest rates, exchange rates, and equity markets.

Futures contracts are an important sort of derivative that is also widely used. Commodity futures are the ones that see the most activity. The most essential of these are oil price futures, which are what eventually determine the price of gasoline as well as the price of oil.

Another type of derivative just gives the buyer the option to buy or sell the underlying asset at a certain price and on a certain date.

The Four Dangers Involved with Derivatives

Derivatives contain four significant risks. The fact that it is nearly impossible to ascertain the true value of any derivative is by far the most concerning. It is determined by the value of one or more assets that are used as a basis. Because of their level of intricacy, setting a price might be challenging.

Because of this, mortgage-backed securities ended up being extremely destructive to the economy. When the price of homes dropped, nobody, not even the computer programmers who had designed them, knew what their value was. Because banks couldn’t figure out how much they were worth, they became reluctant to trade with them.

Leverage presents still another risk, although it is also one of the features that contribute to their allure. For instance, in order to keep ownership of a futures contract, a futures trader needs only to deposit between 2% and 10% of the contract into a margin account. 6. If the value of the underlying asset goes down, they have to put more money into the margin account. They have to do this to keep that percentage until the contract ends or is offset.

In the event that the price of the commodity continues to fall, maintaining the margin account can result in significant losses. The Education Center of the Commodity Futures Trading Commission (CFTC) has a lot of information about derivatives.

The third danger is the limited amount of time they have. It’s one thing to speculate that the price of gasoline will continue to rise. Attempting to pinpoint the exact time when anything like that will take place is a very different ballgame. Nobody who bought MBS anticipated that the price of a home would fall. The previous time this occurred was in the midst of the Great Depression. Additionally, they believed that CDS was protecting them.

Because of the use of leverage, any losses that happened had a much greater impact on the economy as a whole. In addition to this, they were not regulated and were not traded on any exchanges. This is a danger that is exclusive to over-the-counter derivatives.

Scams are a possibility, which brings us to our final point. Bernie Madoff used derivatives as the foundation for his Ponzi scam. The derivatives market is rife with fraudulent activity. The most recent cons involving commodities futures are detailed in the CFTC advisory.

What exactly are digital currency derivatives?

Crypto derivatives give users the opportunity to bet on cryptocurrency prices or hedge their exposure to cryptocurrency risk. Bitcoin futures are one type of these derivatives, and they are traded at the CME Group alongside equities and commodities. Additionally, there is an exchange-traded fund (ETF) called BITO that holds bitcoin futures, and traders can also trade options on BITO as an additional sort of cryptocurrency derivative.

On the other hand, crypto derivatives can also refer to specific futures contracts that are traded on cryptocurrency exchanges such as BitMEX. These products are similar to traditional futures, but they have much higher leverage and a different way of closing out traders’ positions than traditional futures.

What other kinds of stock derivatives are there?

Although stock options, also known as calls and puts, are probably the most well-known types of stock derivatives, there are other varieties as well. Sometimes other kinds of derivatives, such as swaps and forwards, are also issued for a stock. Traders can use futures like ES and NQ as derivatives of the whole stock market, even though they are not exactly derivatives of a specific stock.