For the first time, Fitbit Health Metrics will be offered for free 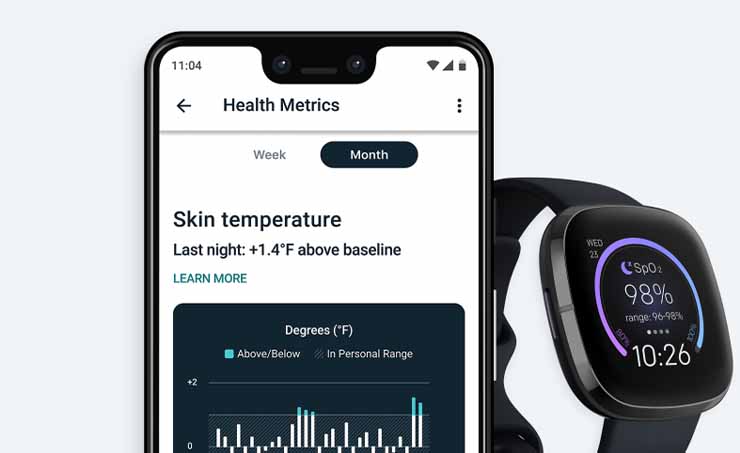 What goes to whom?

An Update on Glucose

What happened to the latest news?

Glucose tracking appears to be far from the only function coming to your Fitbit in the near future. Skin temperature variability readings will be available to Charge 4 owners. For the first time, non-premium users will have access to certain premium health measures.

It’s worth noting that it won’t be the same as what Premium subscribers get. Those who do not pay the monthly charge will only be able to see data for one week. Only those who pay the $79.99 required for an annual subscription will get access to the entire package.

Nonetheless, Fitbit’s decision to make this information public is a thoughtful gesture. Its choice to enclose some features behind a paywall did not go over well. However, the free access is limited to specific devices.

What goes to whom?

Users of the Charge 4 will be able to see SpO2 readings on the watch face. Previously, this was only visible as a graph in the smartphone app’s nightly sleep stats.

That’s not all, though. Who knew the Charge 4 featured a temperature sensor for your skin? It does, and you’ll be able to retrieve the readings shortly. These are nighttime skin temperature variation estimations, just like the Versa and Sense ranges.

Owners of the Charge 4, Versa 2, and Inspire 2 will also have free access to Health Metrics. As previously said, you can view a week’s worth of data on breathing rate during sleep, heart rate variability (HRV), and more. Premium subscribers will have access to more detailed data, including long-term trends.

An increase in breathing rate or HRV may indicate that you are catching a cold or that your body requires rest. As a result, it’s beneficial to track patterns over time. HRV is another prominent statistic, especially among athletes who are serious about their training. This is because it demonstrates how exhausted you are.

It’s great to see Charge 4 getting all of these improvements. Our recommendation for the best fitness tracker for the average person is this device. It will be much better with the added features. The device hasn’t been out long, but it’s still a smart deal given that its successor isn’t expected until 2022.

The Fitbit Sense is also garnering a lot of attention. The ECG feature is now available in a few more countries, according to the company. Certain US territories, such as American Samoa, Puerto Rico, the US Virgin Islands, and Guam, as well as Canada and New Zealand, are included. ECG can only be used in nations where the manufacturer has gained regulatory authorization. Fortunately for Americans, the FCC was one of the first agencies to approve Fitbit.

An Update on Glucose

According to our previous post, all Fitbit users will soon see a glucose panel in their smartphone app. In short, you’ll soon be able to manually enter glucose data for a more complete picture of your health.

If you use LifeScan’s OneTouch Reveal app, your measurements will be immediately transferred to the Fitbit app. With additional glucose monitors on the market, you’ll be able to accomplish that in the future.

What happened to the latest news?

At this time, it’s unclear when the above features will appear. Some users have reported seeing them already, but these are the outliers rather than the rule. The upgrade is expected to arrive later this month. It will be a gradual rollout, as is customary. Fitbit does this to eliminate any potential flaws as soon as feasible.

The company has made no statement to corroborate or deny the rumors. This was said earlier today by a moderator on one of the official Fitbit forums.

“We don’t have this type of information in regards to your update question.” However, if there is a pending update, you will be able to view a banner. “All you have to do is keep an eye on your Fitbit app.”