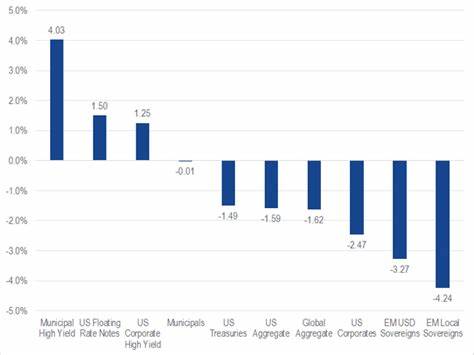 Performance of Municipal Bonds Over a 15-Year Period

Taxation on municipal bonds: what kind?

How do I purchase municipal bonds?

Bonds are seen as investments with lower risk and potential return. The variety of bond products available on the market cannot be explained by this straightforward approach to bonds.

Find out how these bands have performed in the past to determine whether they are a good investment. You should educate yourself on the hazards associated with these kinds of investments.

Performance of Municipal Bonds Over a 15-Year Period

The Bloomberg Aggregate Index returns are also displayed alongside municipal bond returns to help you see how they differ and to give you an idea of how well municipal bonds performed in comparison to the larger fixed-income market.

You can see that municipal bonds perform roughly as well as the whole bond market in terms of interest-rate risk. Rates increased in two of the three years (1994, 1999, and 2013) during which the Bloomberg (previously Barclays) Aggregate Index declined.

The Municipals had a loss in each of the three. However, in 22 of the 23 years in which the bond market ended the year in a positive or neutral position, these bonds produced a positive return.

Municipal bonds are still connected to the larger bond market even though they may fluctuate more than many other fixed-income products.

The returns on municipal bonds are also influenced by credit risk. The possibility of a bond defaulting is known as credit risk. It contains larger elements that affect how default expectations are changing. For instance, a recession increases the chance of defaults.

This may have an impact on bonds whose credit risk is correlated with performance.

Many different issuers, including states, large cities, small villages, and particular corporations, provide municipal bonds (such as airports and sewer districts). Credit risk can therefore affect how they perform.

In 2008, rates went down and the bond market went up by more than 5%, but the value of municipal bonds went down.

It depicts a year in which a recession began. Risks were avoided at the time by those who invested their money. The collapse of the property market resulted in a dramatic decrease in tax revenue for municipalities and other organizations. At that time, worries were expressed regarding the potential for a rise in the default rate.

Investors in municipal bonds are more exposed to credit risk than those who invest in Treasury bills.

Municipals also underperformed in years with significant financial news headlines, such as 1994 (the bankruptcy of Orange Country, California); 2010 (Meredith Whitney’s forecast of a “wave of defaults”); and 2013 (the bankruptcy of Detroit and the financial woes of Puerto Rico).

The effects of these events also show that the performance of municipal bonds is affected by more than just changes in interest rates.

Municipal bond returns have historically been pretty comparable to those of the investment-grade market over the long run.

Bonds are said to offer the low-risk returns that conservative investors and people who are close to retiring need. Bonds are by no means risk-free, as the table above illustrates with its nearly 20-point difference between the best and worst year’s results.

Although they fluctuate less than equities do, there is still a possibility for dramatic fluctuations. It also counts a lot when you start investing, just like with stocks.

Municipal bonds are a very risky investment, even though they have historically changed less than stocks.

Early in the 1980s, bond returns were very high. This happened because bond investors had an advantage over subsequent investors in most circumstances due to compounding, which provided bond investors a head start on the market.

Similar to this, those who invested in bonds following the financial crisis that started in 2007 have seen nearly a decade of dismal returns. Even an increase in interest rates won’t make up for this slow start.

Taxation on municipal bonds: what kind?

If you buy municipal bonds from issuers in your area, you may not have to pay taxes on them at the federal, state, or local levels.

To make sure that the bonds you choose are eligible for tax incentives from state and municipal authorities, you might want to engage with a professional.

How do I purchase municipal bonds?

You might be able to purchase municipal bonds (or bond funds) for your state through well-known brokerages, depending on where you live.

If your brokerage doesn’t offer the right kind of municipal bonds, a full-service broker or investment advisor can help you find the assets you want.