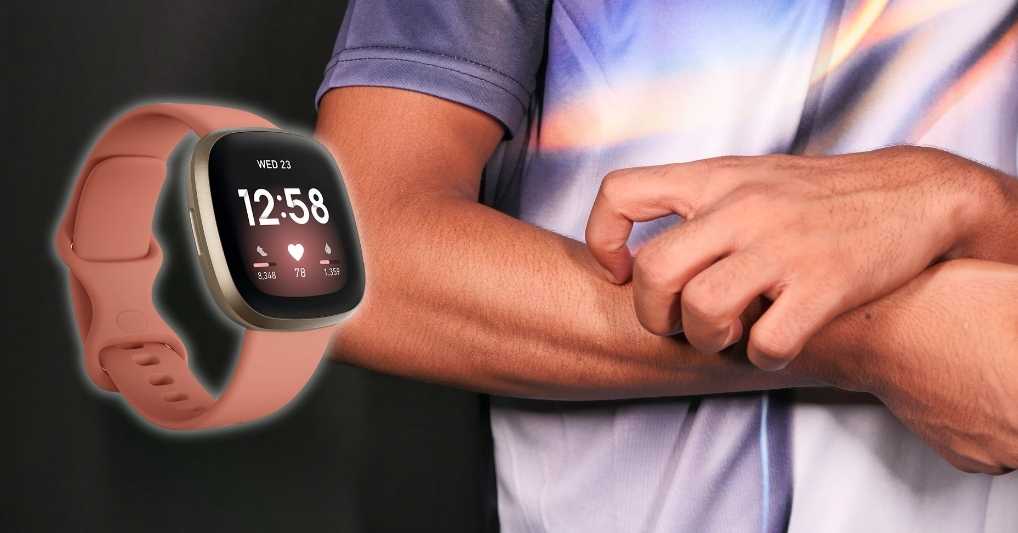 There is a good chance that you will break out in a rash as a consequence of wearing your fitness tracker or smartwatch; this happens to a lot of people. This is a truth that is frequently ignored by a number of manufacturers.

A rash is a visible change in the tone or texture of your skin that can occur at any age. There are a lot of different things that might cause it, including allergies, certain drugs, cosmetics, and even infections like chickenpox and measles. While the majority of a consumer’s attention is typically focused on the device’s features, it is important for them to remember that their wrists have sensitive skin as well.

In 2014, Fitbit issued a recall for the Force wearable fitness tracker, which led to the company’s making headlines. While others experienced no adverse effects, some users got rashes on their wrists after wearing the device. It had only been available for purchase for a little over half a year at that point, and it was intended to be the high-profile successor to the Fitbit Flex.

According to a statement made by Fitbit at the time, “The reactions we are seeing with new products are not unusual with jewelry or wearable devices that stay in contact with the skin for lengthy periods of time.”

According to our consulting dermatologists, they are likely caused by wearing the band too tightly; sweat, water, or soap held against the skin under the device; or from pressure or friction against the skin, and they should resolve quickly when users take a break from the device, typically within hours or days.”

However, rashes are not exclusively a problem with Fitbits. Users of Garmin, Polar, and other brands have in the past voiced concerns about rashes, burns, and allergic reactions after using their products.

Everyone’s skin is unique. On the other hand, there are a few typical reasons why wearing a fitness tracker could cause your skin to react negatively.

Concerning allergic reactions, manufacturers have a significant role to play. When looking for materials that are both soft and durable, look for plastics that feature perforated grids. This will let the material breathe better. One further possible offender is the nickel that is utilized in the production of stainless steel, as certain individuals are nickel-sensitive. Nickel is known to trigger an allergic reaction in approximately 11 million children and nearly one in five adults in North America.

Irritating to the skin are substances such as soap and other similar products. The majority of soaps contain a number of components, such as lye and oil, in addition to a wide range of scents and coloring additives, all of which have the potential to aggravate existing skin sensitivities in certain people. Other products such as bubble bath, body washes, and dishwasher soap can also cause skin irritation. It’s possible for these substances to become trapped beneath a band, and after some time, the harsh chemicals will start to irritate the skin.

Miliaria is caused by an obstruction in the sweat ducts, which causes sweating. If the band that you are wearing is excessively tight, there is a possibility that your sweat ducts will become blocked. On a hot and muggy summer day, this may be an especially difficult challenge.

Regrettably, there is no treatment that will fix everything. On the other hand, there are certain steps you can take to lessen the likelihood of experiencing this unfavorable condition.

It’s possible that the remedy is as simple as frequently cleaning your wearable device. The most likely sources of discomfort are built-up bacteria and dampness that can’t escape. Before putting on the fitness band again after engaging in activities that cause you to sweat or that cause your skin to become wet, ensure that both your wrist and the fitness band have been thoroughly cleaned and dried. You can also clean your gadget by using a gentle cleanser that does not contain soap, such as Aquanil or Cetaphil. A filthy band is not only unhealthy for your skin, but it also has the potential to interfere with the operation of your sensors.

Give your wrist some air to breathe since not only is breathing healthy for you, but it is also healthy for your skin. There is no legitimate reason for you to wear your fitness tracker or smartwatch 24 hours a day, 365 days a year!Do your skin a favor and treat it to some wearable vacation time!

Put the band around your wrist so that it has enough slack so that it may move freely back and forth. Alternately, you may relax it when you are not working out and then pull it tight when you are working out, for instance, when you are out for a run. In addition, remove the band from your wrist for twenty minutes every day during an activity that is not particularly exciting, such as when you are showering. There is no doubt that you will skip a few steps, but your wrists will be grateful to you for doing so.

Alternately, you might move the band from one wrist to the other at various points throughout the day. On the other hand, if you do this for extended periods of time, you might need to adjust the settings on the smartphone app that goes along with it to indicate whether you are wearing it on your dominant or non-dominant hand. Those settings can be found here.

Because skin irritation can be caused by a wide variety of factors, diagnosing its root cause frequently requires a process of elimination through trial and error. Rashes are most likely caused by irritation, which can be caused by things like water, sweat, or soap. Simply ensure that you set aside some time on a regular basis to check that the fitness tracker as well as your wrist are free of dirt and debris. It is also possible that a genuine allergy is at fault in some of these instances. When it comes time to choose your next wearable device, it is in your best interest to take all of this into consideration.