Is Suicide Covered by Life Insurance? 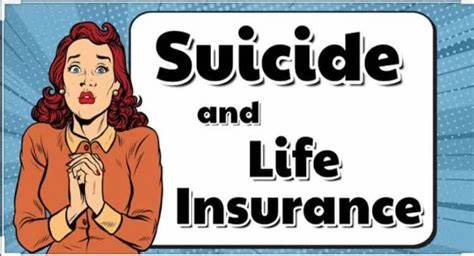 Is Life Insurance Payable in the Case of a Suicide Death?

The Clause of Incontestability

The Provision on Suicide

When Do You Get Paid for a Suicide Death Benefit Claim?

When a Claim for Suicide Death Benefit Is Rejected

Why does a life insurance policy sometimes become void due to suicide?

If you are having thoughts about suicide, please contact the National Suicide Prevention Lifeline at 1-800-273-8255 for support and assistance from a trained counselor. Call 911 if you or a loved one is in immediate danger.

In the United States, more than 5.4 million people have lost a loved one to suicide. The loss of a loved one in this manner can be devastating and perplexing. You must not only grieve, but you must also deal with the practical and financial aspects of death, such as replacing your loved one’s lost income and planning and paying for a funeral or memorial service. When you’re dealing with a denied life insurance claim, these already difficult tasks can seem impossible.

Is Life Insurance Payable in the Case of a Suicide Death?

Whether or not a death benefit is paid after a suicide is usually determined by the time of death. It’s important to note that if you buy a policy within two years of committing suicide, the death benefit may not be paid.

The Clause of Incontestability

The two-year mark is significant because it typically signifies the end of the policy’s contestable period. The life insurance company can deny a death benefits claim during this time if the applicant made a material misrepresentation on the application or withheld information that would have influenced the insurance company’s decision to issue the policy. For example, material misrepresentation could include lying about a diagnosed illness.

Once the time limit has passed, the insurance company can only challenge a claim if it is fraudulent. Consider the following scenario: you pay premiums on a policy without an incontestability clause for years; your spouse files a claim after your death, but the insurance company denies it because you misspelled something on the application. This clause is intended to prevent such an occurrence. A claim becomes “incontestable” after a certain amount of time has passed.

A suicide provision or clause may be included in a life insurance policy in addition to this clause.

The Provision on Suicide

Some policies stipulate that the death benefit will not be paid if the cause of death is a suicide, which usually occurs within the first two years of the policy’s inception. The premiums paid into the policy, on the other hand, may be returned to the beneficiary under such a provision.

If you are having suicidal thoughts, contact the National Suicide Prevention Lifeline at 1-800-273-8255 for support and assistance from a trained counselor. Call 911 if you or a loved one is in immediate danger.

Other clauses in life insurance policies may exclude payments for death as a result of:

When Do You Get Paid for a Suicide Death Benefit Claim?

Even if a policy does not have a specific suicide clause, it may choose to investigate a claim during the contestability period if it appears to be questionable. Though this may not result in a final denial of the claim, it could cause frustration and undue hardship by significantly delaying the payment of the death benefit.

Some policies, for example, may have a three-year contestability period.

When a Claim for Suicide Death Benefit Is Rejected

It’s highly unlikely that a claim would be honored and the death benefit paid if the policy has a suicide clause and death occurs as a result of suicide before the clause expires. This period is usually two years long.

There is, however, one important caveat. If the life insurance policy is reinstated after it has lapsed, the suicide clause and contestability period will most likely start over. Assume you lost your job and were unable to pay your insurance premium. Your insurance policy will lapse as a result. If you wanted to reinstate the policy a year later (and the insurer agreed), the contestability period and suicide clause would begin all over again, even if you’d had the policy for years.

However, even if an insurance policy does not include a suicide clause, a claim may be denied during the contestability period. This could happen if the insurer discovers evidence that the applicant lied on their application or died as a result of illegal activity or substance abuse.

If you or a loved one is struggling with substance abuse or addiction, call the SAMHSA National Helpline at 1-800-662-4357 for information on local support and treatment options.

Help is available if you’ve lost a loved one to suicide and are having trouble filing a life insurance claim. The Alliance for Hope and Friends for Survival is two organizations that provide survivors with support and resources. Remember that taking care of yourself will help you complete the tasks you need to complete during this time.

Ask your insurance agent about the details of your policy if you’re unsure under what circumstances it will pay out. If you’re thinking about suicide, call the National Suicide Prevention Lifeline at 1-800-273-8255 for support and advice from a trained counselor. Call 911 if you or a loved one is in immediate danger.

Why does a life insurance policy sometimes become void due to suicide?

A: Suicide may void a life insurance policy for a variety of reasons, depending on the policy. Suicide has been identified as a potentially voiding event by some. Suicide is also prohibited in some areas, and policies may be revoked as a result of illegal activity.

How long do you have after death to file a life insurance claim?

There shouldn’t be a strict deadline for filing a claim for a loved one’s death as long as the policy is in good standing. Keep in mind that the claims process takes time, so you won’t get paid right away after filing a claim, but you won’t miss out on the chance to do so.