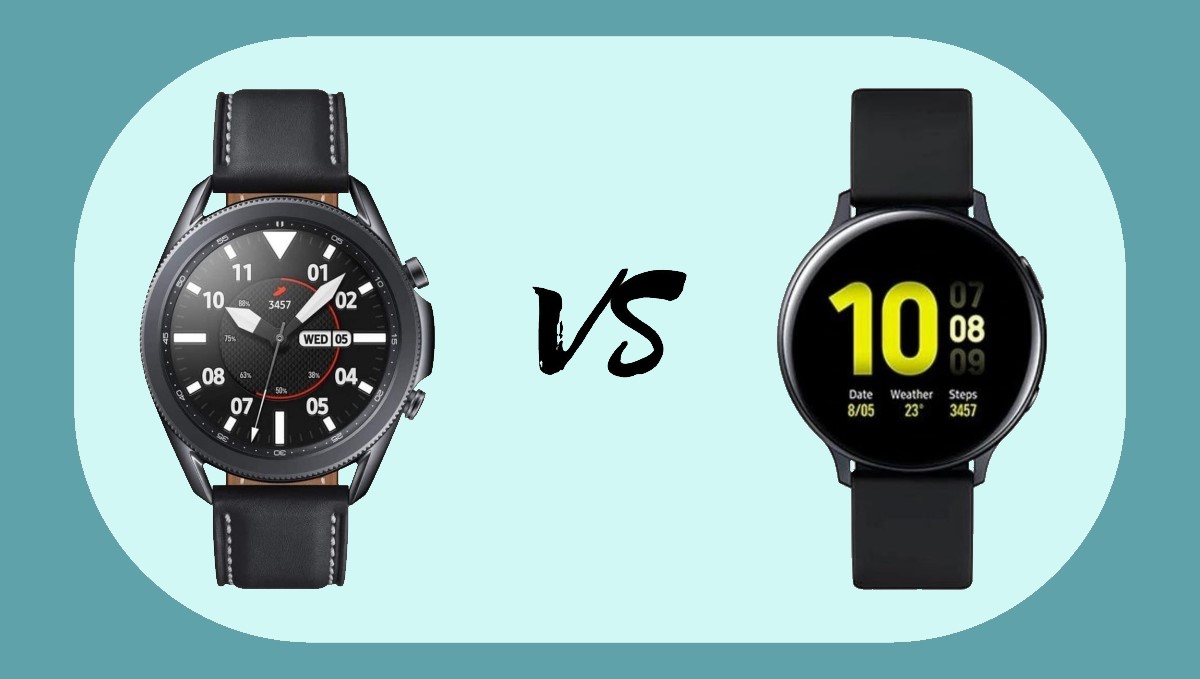 The Samsung Galaxy Watch Active 2 is the company’s most affordable watch, yet its popularity speaks for itself. It’s primarily a fitness watch, but it also boasts good smartwatch capabilities. Now that the Samsung Galaxy Watch 3 has been released, you may be unsure which one to purchase. This is the Android equivalent of choosing between the Apple Watch 6 and the Apple Watch SE. And how do you make a comparison between the two? What exactly do they do? What do you stand to gain from one and lose from the other? Don’t worry; we’ve compared them in every possible way so you can make an informed choice.

Both types include two buttons for navigating the software. These, on the other hand, sit considerably more flush on the Samsung Galaxy Watch Active 2, giving it a much more sleek and streamlined appearance.

When it comes to touchscreen displays, Samsung always delivers. which is to be expected from a company that makes some of the best televisions in the world. You get 360 x 360 resolution on both models, which is bold, brilliant, sharp, and colorful. When it comes to display size, the larger sizes of both models have 1.4-inch displays, while the smaller sizes have 1.2-inch displays. When it comes to rotating bezels, the original Watch Active removed this feature, but it’s now back in a slightly different form.Instead of a physically moveable bezel, you get a touch-sensitive one. The rotating bezel on the Samsung Galaxy Watch 3 appears to be thinner than the previous generation.

There’s a lot going on here in terms of colors and models, especially with the Active 2. For the Bluetooth and LTE versions, you can choose from silver, black, or gold in both size options. The larger 45mm version of the Watch 3 is available in silver or black. The 41mm variant is available in bronze or silver. Interchangeable bands are available on all models. The smaller of the two accepts 20mm bands, while the larger accepts 22mm. If that wasn’t enough, Samsung also provides a couple of different Active 2 models. Golfers, for example, can obtain a special golf edition with a special strap and golf-related functions. There’s also an Under Armor variant, which comes with a branded face and pre-installed fitness applications.

All models have a 5ATM waterproof rating, which means they may be submerged for up to 50 meters. It’s convenient because you can keep track of your swimming!

All of the technology and functionality are part of the allure of a smartwatch. A customer’s decision is usually made after weighing their options side by side. Let’s take a look at the features of smartwatches in a few key categories.

While incident detection debuted with the Galaxy 3 and was enhanced for the Galaxy 4, Samsung has promised that fall detection will be included in the majority of their smartwatches. This means that in the event of a fall, the Active 2 and Galaxy 4 will be able to notify emergency contacts.

Samsung adds fall detention to their safety features in the following manner. A 60-second ringing alert is triggered if you fall or stop moving suddenly and the watch receives a shock. If you do not answer this call within that time frame, your emergency contacts will be notified and will be able to assist you.

If you choose the LTE version, you can download apps and make calls on any model. When compared to rivals such as Google’s Wear OS, Tizen OS is more user-friendly.

As a result, all models will provide a smooth experience. Both have adequate RAM to prevent lagging, but the Watch 3 has 8GB versus the Active 2’s 4GB.

The Active 2 has a few more features than the Galaxy Watch 3. It’s smarter, for example, because you can respond to communications with better contextually pre-loaded responses. That isn’t to suggest that this feature won’t be included in the Active 2 in the future.

The Active 2 is the more powerful fitness tracker of the two, thanks to its lighter and smaller design. It’s ideal for HIIT, swimming, and running enthusiasts. However, the Galaxy Watch 3 in its smaller size is also rather impressive. As a result, it is dependent on how important such smart features are to you. Both watches include GPS, heart rate monitors, and accelerometers integrated. To keep you going, there’s round-the-clock fitness tracking, guided breathing sessions, stress tracking, and a few funny motivational elements.

How about automatic activity recognition if you want more information than just steps and sleep? Sports modes are available for common activities such as swimming, cycling, and running. The Active 2 has a few advantages here, but we’re betting the sports modes will be introduced to the Galaxy Watch 3 during one of Samsung’s frequent software upgrades. In fact, Samsung is teasing us with several new Watch 3 capabilities, such as improved running metrics and training modes that use the heart rate monitor to display real-time statistics. So, once this feature is put out, there won’t be much of a difference between the two in terms of fitness tracking, so it may come down to price for you.

Both watches, of course, run on Tizen OS, which is compatible with both Android and Apple devices. They’ll deliver your alerts, weather, and Spotify music, as well as the Bixby smart assistant to assist you. The user interface is the same for both, and using either version of the bezel is the best way to navigate it.

Samsung has taken an interest in health monitoring, and both models now have a blood pressure monitor watch function. The Active 2 and Watch 3 both include an ECG sensor, which is becoming increasingly prevalent these days. In addition, the Watch 3 can assess blood oxygen levels. (Learn why this is significant.) You may use the new safety function, fall detection, just like Apple Watches. You’ll be able to do even more after it’s been approved by the FDA and turned on. They’re very evenly matched in terms of health monitoring and have intriguing features planned for the future.

Battery life is always a factor to think about. Things could be better, as with any smartwatch. Garmin and Fitbit dominate the market in this category, with devices that can last almost a week between charges. When it comes to the Active 2, either size variant can last up to four days. This is always contingent on how much you use it and how many apps you have open. Officially, Samsung does not claim a long battery life for the Watch 3. According to users, it usually lasts a little under three days. Still, far superior to any Apple Watch. Of course, you may extend this by using the ‘Watch Only’ mode, but it only allows you to use your smartwatch for the essentials.

Hopefully, this article has clarified the differences between the Samsung Galaxy Watch 3 and the Samsung Galaxy Watch Active 2. So, which one should you pick? The solution is… It is debatable! They’re so similar, and with the promise of new capabilities in future software upgrades, it’ll probably come down to size and weight preferences, as well as affordability. Both designs are stunning, so you can’t go wrong with either. The Active 2 is a popular watch for a reason, so you can buy with confidence that you’ll have a good time with it. In fact, the fact that Samsung based the Galaxy Watch 3 on the Active 2 rather than vice versa says a lot.