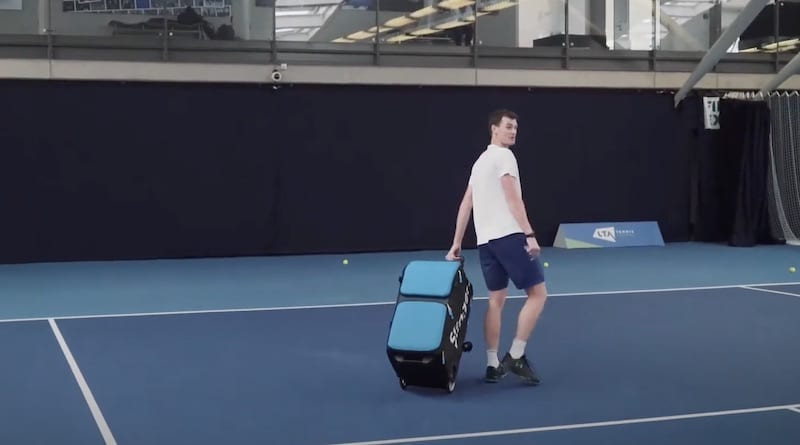 The Slinger Bag, a one-of-a-kind high-tech portable tennis ball launcher, was used by Jamie Murray on the court. The Schroders’ Battle of the Brits, which takes place later this month, has Slinger as one of its sponsors.

We recently published a review of this cutting-edge device. It doesn’t look like a tennis ball launcher, but it’s capable of flinging balls at speeds of up to 45 miles per hour in your direction. The gadget can be programmed to fire shots from a variety of angles and elevations. A fantastic companion who guarantees that you adhere to the current social distance measures.

We discovered that the ball launcher works well, looks amazing, can hold a lot of tennis balls, and can be customized to your level of play. In terms of ball speed and spin, most players should be fine. Because the balls have top spin, they accelerate as they contact the ground.

Check out and watch the video below if 45 miles per hour does not seem like a lot. Jamie Murray, a seven-time Grand Slam doubles and mixed doubles champion, is seen working out with Slinger Bag. He appears to have chosen a mode with a higher elevation. This can be adjusted between 10 and 40 degrees.

This was done to promote the upcoming Schroders Battle of the Brits, which will take place in London from June 23rd to 28th. Slinger Bag is a sponsor of this “behind-closed-doors” tennis tournament, which aims to raise at least £100,000 for the NHS Charities Initiative.

Jamie Murray remarked, “We’re incredibly delighted to be teaming up with Slinger at the Battle of the Brits.”

I’ve started hitting with the Slinger Bag recently. It’s fantastic to have this one-of-a-kind piece of equipment that has made practicing social distancing a breeze. We’re excited to show them around the practice courts at the event. “

The six-day event commemorates the beginning of Slinger Bag’s involvement with and support of British tennis. The portable ball launcher is now available in the United Kingdom. This link will take you to a page where you can buy it in other countries.