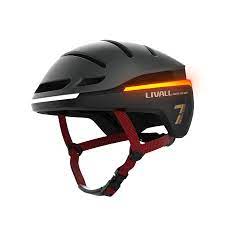 On Indiegogo, LIVALL is conducting a fundraising campaign for the EVO21 smart helmet. It features an all-inclusive set of LED lights with stop and turns signals, a proprietary SOS system, and a sturdy yet comfortable build, and it can be used in various environments.

For the past seven years, this well-known company has produced high-tech helmets, some designed for winter sports such as skiing and mountain biking and cyclists. During this period of time, it has developed into the most successful smart helmet vendor in the business.

Now the company is releasing the latest iteration of its smart helmet, which has turned to Indiegogo to generate funding and exposure for the product. Over $300,000 has been contributed to the LIVALL EVO21 Smart Helmet campaign in the short period that it has been running on the site. This is far more than the aim of $10,000, which has turned out to be pretty modest.

The high-tech elements of the smart helmet are practically bursting at the seams. Its primary function is to shield you from injury in the event of a collision, but its design has a far broader scope. Its primary objective is to forestall the occurrence of incidents before they take place.

In this regard, the EVO21 is equipped with a complete collection of LED warning lights that can automatically adjust their brightness level. This comes with a 270-degree backlight that has a larger lumen output and increases your visibility from greater distances. Even if you turn your head to the side, you won’t be able to hide the front light because it has a reach of 45 degrees and multiple colors.

A smart brake warning light and turn signals are installed on your vehicle to communicate with other motorists about your intended actions. These are coupled to accelerometer sensors, which automatically alert when they detect that you are decelerating or coming to a stop.

This is combined with a remote mounted on the handlebar, allowing you to communicate with the LEDs about whether you are turning to the left or right. Using your arms to signal is much riskier and slower than using your hands.

The same kind of technology is included in motor vehicles and motorcycles. According to the manufacturer, the helmet is both brighter and lighter than any other product now available on the market.

It is also less risky. The EVO21 comes equipped with a fall detection system as well as an SOS smart. In the unfortunate event that you experience a fall, it will send a text message to the person you have designated to receive it in the event of an emergency. A GPS signal obtained from your smartphone is used in conjunction with the notification to provide the other party with your precise location. There is no need for you to touch any buttons because everything will be handled automatically.

According to LIVALL, the technology can detect falls at any height greater than 1.5 meters. After the accident has occurred to you, you should receive a text message within a minute and a half at the most. This will allow you time to turn it off if the emergency was a false alarm. For instance, if you knock over your helmet but do not require assistance from anyone else.

The software on the user’s smartphone is used to make any necessary adjustments to their emergency contacts. This provides tracking for both your fitness and your routes, and it also displays the remaining battery life. You can also link up with other riders by joining a riding community through the LIVALL Riding App, which provides this feature.

The construction of a helmet that is intended to protect you is, of course, the most significant aspect of the helmet. This matter is taken very seriously by the company, as evidenced by its achieved an A-plus grade after undergoing stringent testing in accordance with established safety standards.

To achieve this goal, the ultra-lightweight (350 grams) protective PC shell that comes included with the EVO21. This is paired with a lower PC shell offering further protection and an EPS liner absorbing impact.

A dual-protection system provides increased defense against the effects of impact. The initial layer of the helmet is constructed out of a PC material designed to disperse the impact force transmitted through the helmet uniformly. The second one is constructed with Polysource PSI. Its function is to soak up any remaining pressure and divert it away from your head as much as possible.

Additionally, there is a layer for added coziness. Memory foam, the material from which it is formed, helps to create a close fit, which is just what you want for those extended bike rides. The helmet features an aerodynamic ventilation design and a greater venting surface to help you maintain a healthy body temperature.

A water resistance grade of IPX5 is included with all of this equipment. This indicates that the intelligent helmet and its lighting system will function adequately in most weather circumstances, including rain. Having said that, the business does not advise riding on days when there is a storm in the forecast.

The battery will last for a good ten hours on a single charge. The average rider should keep them going for around a week.

Already, the LIVALL team has begun the process of transforming their prototype into a finished product. They have a great deal of experience in this field because of the fact that they have produced several intelligent helmets. In fact, every year, they send out an amazing two hundred thousand helmets all over the world.

The LIVALL EVO21 is the most up-to-date and advanced model of smart helmet that the firm has produced to this point. Because it satisfies both the most stringent aesthetic and functional requirements, the iF Gold Award 2021 has been bestowed upon it. A “thumbs up” from an international design jury in the form of a seal of approval is what it means to be awarded an iF Gold Award. Out of a total of 10,000 submissions from more than 50 nations, only the 75 designs and accomplishments that are considered to be most remarkable will be considered for this award.

At this time, the LIVALL EVO21 can only be pre-ordered through Indiegogo than any other platform. For an early bird discount of $89, you can have the helmet delivered to your home the following month. This is a 31% reduction from the price that it will sell for once it is available in retail stores. You have the choice of selecting from two different sizes in addition to a variety of colors, some of which include Snow, Dark Night, Ultraviolet, and Mint.