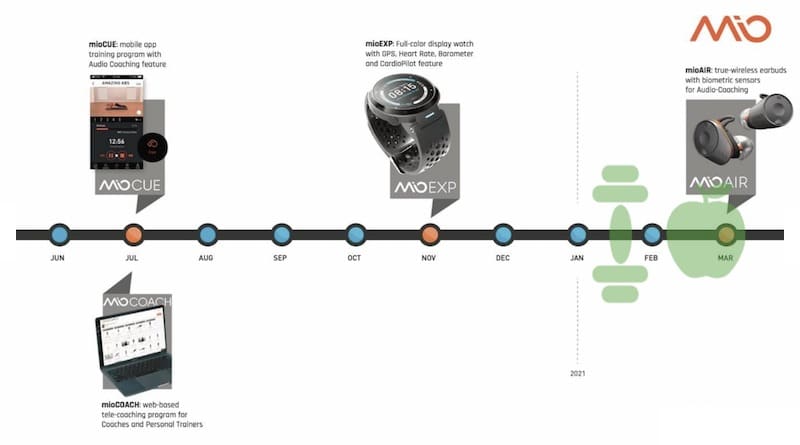 Mio is developing a sports watch with real-time coaching and enhanced fitness measurements, as well as biometric earphones. The first will be called mioEXP and will be released in November 2020, while the second, mioAIR, will be released in March 2020.

At a Valencell webinar, Marcelo Aller, Mio Labs’ Head of Marketing and Sales, shared the facts. A cooperation exists between the two businesses.

MIO is a name familiar to those of us who have been following wearable technology for a while. Since 1999, the company has been developing performance wearables. In collaboration with Phillips, they developed the first wrist-based optical heart rate for tracking sporting performance in 2011. Two years later, they debuted the Mio Alpha, the first continuous, real-time heart rate monitor on the wrist.

Their position was significant in this field until they decided to exit the digital health market. MIO announced at the end of 2017 that it was exiting the hardware business to focus on software development. However, it appears that they are now looking for a way back in.

Mio released monoPOD in September of this year. This is a heart rate monitor that you can wear on your forearm or upper arm. The device uses Valencell’s latest optical sensor technology, which produces a cleaner signal with less noise than traditional heart rate straps. It’s especially good at high-intensity exercises like HIIT and weightlifting.

However, it appears that this is simply the beginning. In the webinar, Mio announced that it is developing a new range of performance sports wearables with real-time coaching.

mioCUE is a mobile software and training programme that will include an audio coaching function. The idea is to use biofeedback to provide individualised, actionable information. According to Mio, the app communicates with the user and assists them in understanding their data points.

This will involve workout programmes including marathon, half-marathon, 10K, and 5K training, as well as obtaining suitable supervision. With the launch of the sports watch, Mio claims that additional sports will be included.

Coaches and personal trainers can use mioCOACH, a web-based tele-coaching application. Coaches will be able to invite clients to the programme, develop tailored programmes, email the workouts to clients, and track their progress via the web-based platform. The Mio Coaching Loop is how the firm refers to it.

Mio is the source of this image.

The mioEXP will be a top-of-the-line sports watch. A full-color display will be included, as well as GPS, PPG, a barometer, gyroscope, and accelerometer. The following image shows a sporty-looking device that looks a lot like the Garmin Forerunner line. The device will be designed as an all-in-one triathlete solution for endurance athletes.

The clock will also feature heart rate variability (HRV) measurements, which the business will use to get insight into recuperation. HRV is now unavailable for the mioPOD.

Firstbeat Analytics will also be displayed on mioEXP. Training Quality, Adaptive Training Guidance, Sleep Analytics, and Race Time Prediction & Readiness are among the topics covered. Cardio Pilot will be another feature. These are color-coded zone reminders that help you stay in the right cardio zone for your goals by alerting you to real-time heart rate intensity.

MioAIR are true-wireless earphones with physiological sensors for audio coaching that will be released in March 2021. This form of tracking, according to Marcelo Aller, is the way of the future because biofeedback equipment integrated inside the inner ear canal is better equipped to obtain an accurate PPG signal.

Users will be able to hear analytics such as training effect, training load, heart rate, distance, and more at any moment by pressing the coaching button on the buds. The goal is to offer a complete wireless solution. The buds will be able to assess HRV for recovery insights just like the sports watch.

This is all really fantastic news.

The Canadian company was known for manufacturing high-quality fitness-related wearables while it was very active in the wearables market. Mio has minimized the need for bulky chest straps by inventing a comfortable heart rate monitor watch that can reliably offer customers feedback on their training efforts with their Link and Alpha devices.

The corporation is also known for using a Personal Activity Intelligence (PAI) index, which you are supposed to keep above 100. This is primarily concerned with how hard your heart works. In fact, PAI is backed up by one of the most comprehensive health studies ever done. Other brands, such as Huami, have embraced the metric in some of their Amazfit watches. Mio is currently separated from PAI and operates as a separate entity.

We’re thrilled to see the pioneer of wearables making a comeback. Mio is seeking to do so with an entire ecosystem of innovative products, as evidenced by the timeline above.