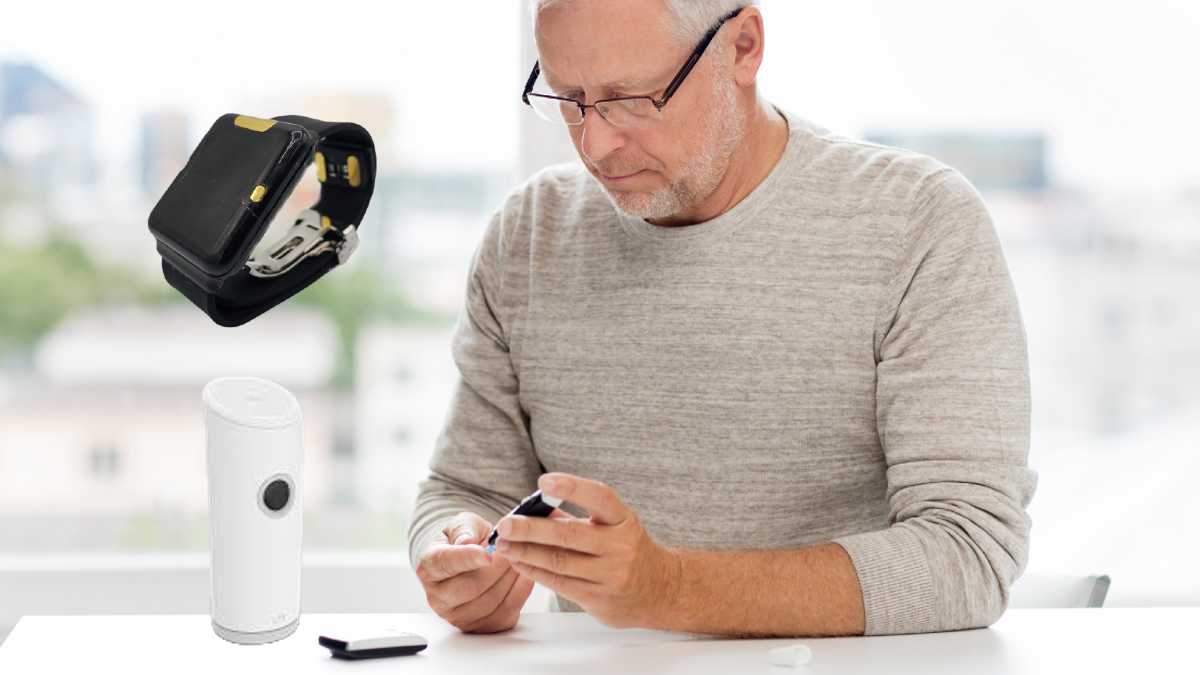 A Wristband with Non-invasive Glucose Monitoring from Quantum Operations

At CES Unveiled, CES 2022, Showstoppers, a start-up company from Japan, will demonstrate a glucose monitor that does not require invasive procedures. They demonstrated a prototype at the Consumer Electronics Show (CES) in 2017.

It is widely held that the holy grail of diabetes management is glucose monitoring that does not include any intrusive procedures. Diabetic patients do not currently have access to a reliable alternative to the practice of piercing their skin. Many well-known brands have put in significant effort, but with relatively little success, in an attempt to solve the issue.

There have been rumors going about for quite some time now that Apple is developing sensors that can check blood sugar levels non-invasive and continuous. The personal struggles that Steve Jobs was going through in the later years of his life, including diabetes and cancer, served as inspiration for the business’s endeavor to build the sensors.

In accordance with a New York Time article, “In his life’s final months, Steve Jobs, the Co-founder of Apple battled cancer as he also controlled his diabetes.”

According to people who are familiar with the event, Mr. Jobs gave authorization to an Apple research group to create a non-invasive glucose reader with technology that the manufacturer could integrate into a wristwatch. This was done because Mr. Jobs detested having his finger pricked to draw blood.

There may be further options just around the corner as well. Rockley Photonics is responsible for providing one of these. We have written quite a bit about their spectrometer-on-chip architecture, which will enable glucose tracking and a multitude of other data. In the year 2022, it is hoped that smartwatch companies will include these sensors in wearables that are used daily.

A Wristband with Non-invasive Glucose Monitoring from Quantum Operations

But Quantum Operations Inc., whose headquarters is in Tokyo, is trying to get there first. They claim that they have developed an innovative device that can be worn on the wrist and can monitor glucose levels in a person’s bloodstream through the skin and measure ECG and heart rate. The spectrum detecting technology that is incorporated into both the watch and its band functions as the watch’s “brains.”

Putting it on your wrist and selecting the glucose monitoring option from the menu are the only steps involved. Approximately 20 seconds will pass before the first results are displayed.

According to the CEO of Quantum Operation, Kazuma Kato, putting a needle into your finger or arm was the only option available for reliably testing your glucose level until recently.

Thanks to their wristband, this will no longer be the case, which will free diabetic patients from the need to endure the excruciating daily ritual.

The company displayed a prototype at the CES that took place the year before. At the time, they stated that there is still a considerable distance to travel until the accuracy is comparable to that of conventional measuring tools.

The business will be present once again at CES 2022 to demonstrate what it describes as the “world’s first non-invasive glucometer in the shape of a bracelet that is capable of continuous measurement.” They were presented with a CES 2022 Innovation Award in the “Health & Fitness” category for this year’s competition.

The Quantum Operation device, much like the Rockley Photonics solution, uses its patent spectrum sensing technology to determine the amount of glucose present in a person’s bloodstream by analyzing their skin. Users will be able to track changes in various metrics, including heart rate, blood oxygen saturation, and variations in blood sugar levels before and after meals.

“Although testing one’s blood sugar level both before and after an eating is important, this tends to add to patients’ already burdening usual schedule of sticking a syringe into their arms or fingers so many times a day,” says the article. “This is because checking one’s blood glucose level before and after a meal is important.” “We are overjoyed to be able to make this whole process trouble-free and uncomplicated for them,” stated Kazuma Kato, CEO of Quantum Operation.

Diabetes is a condition that affects 463 million individuals worldwide and is responsible for 1.5 million deaths annually. We are delighted to have the opportunity to present at CES 2022 how our technology may transform the way people manage their diseases daily.

The final objective is to sell the gear to various healthcare providers and insurance companies. Quantum Operations is also interested in constructing a platform for big data. They will utilize this to compile and analyze the data obtained from their glucose monitors.