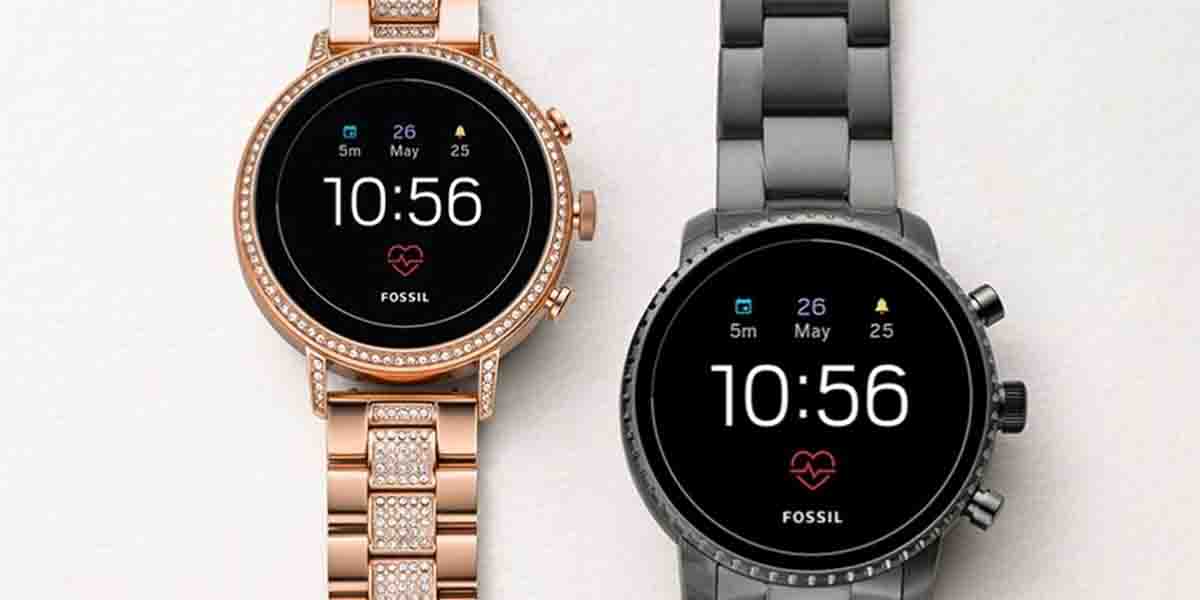 The Fossil Gen 4 is significantly superior to the Fossil Gen 3. It boasts several outstanding features, like a large screen, IP68 waterproof certification, and the ability to measure fitness with pinpoint accuracy. It also has a circular dial, a built-in Google Assistant, and GPS capabilities. It also has a respectable battery life, but Fossil takes care of the battery issue by including a clever and quick magnetic charger.

The design of this Fossil Gen 4 smartwatch is incredibly traditional and attractive. Both the Venture HR and the Explorist HR smartwatches have a round dial face.

The Explorist HR has a 44mm casing, whereas the Venture HR has a 40mm case. Furthermore, both HR smartwatches have a thickness of only 13mm, indicating that the smartwatches are wide and substantial enough to let the arm appear more attractive.

The Fossil Gen 4 smartwatch also includes three tactile buttons. The top and bottom buttons may be programmed to do any function you choose. The centre button, meanwhile, serves as a home or Google Assistant toggle. It may also be used as a crown to scroll through the menus. While the crown design is appreciated the buttons are delicate, one can accidentally activate the Google assistant by twisting their wrist.

Furthermore, the Explorist HR is interchangeable with any 22 mm watch strap, allowing you to modify the look of the wristwatch based on the event; the Venture HR, on the other hand, has an 18mm strap. The Fossil Gen 4 smartwatch is available in a range of case colours, as well as numerous strap colours. You may also swap out the rubber wristbands with leather or steel straps.

The Fossil Gen 4 smartwatch uses the same AMOLED screen as the previous generation wearable, with a resolution display of 454 x 454 pixels.

The 42 mm touch screen also has an ambient light sensor, that indicates it will dynamically alter the brightness of the device based on the lighting conditions in the surroundings. Furthermore, this function aids in the preservation of battery life.

A smartwatch is useless unless it has a new watch face, which is why the company has released a couple of free customization options that you can use to modify the look of your watch.

Wear OS supported by Google is included in both the Explorist HR and Venture HR watches. Furthermore, they share the Qualcomm Snapdragon Wear 2100 chipset. Although this CPU is rather ancient, this watch does not even lag for a second.

This time, fossil did a nice thing by providing us with a smartwatch including a 4 GB internal memory, which is amazing. One’s preferred music and programmes can be stored in the internal memory. It also has 512 MB of RAM, which is more than plenty for a wristwatch.

The Fossil Gen 4 offers several appealing characteristics worth discussing. It has NFC capability, so you can make contactless payments with it. It will be appropriate for sports fans despite its trendy appearance.

The Fossil Gen 4 smartwatch boasts Geolocation, pulse rate tracking, and a 3 ATM water-resistant certification, which means it can withstand rain and splashes. You could use it as a swimming partner, according to Fossil, but it is not recommended.

If you simply want to buy this wristwatch for its activity-tracking capabilities, it contains a lot of sports functions including step counting, jogging, cycling, and hiking.

In terms of accuracy, this wristwatch performs admirably. It displays accurate statistics for all of the outputs, whether it’s calorie counting or heart rate tracking, and it does a good job.

Apart from that, the Fossil Gen 4 wristwatch contains goal-setting capabilities that will assist you in achieving your objectives, real-time coaching, a stopwatch, and an alarm clock to get you up before dawn.

If you’re considering purchasing a smartwatch, the first thing you should ask yourself is, “Is the watch’s performance worth it?” In this situation, both Fossil Gen 4 smartwatch models are excellent.

To begin with, you won’t have to go through a lot of trouble to set things up in this watch. This watch’s user interface is simple and intuitive, making it convenient to use and manage.

Furthermore, the watch’s speed is superb thanks to the Qualcomm Snapdragon Wear 2100 CPU and 4 GB of internal memory with 512 MB of RAM. When the watch is heavily used, however, it has minor delays.

If you are a hardcore smartwatch user, this watch is probably not for you, and if you’re a casual user like me, you will undoubtedly like it.

The Fossil Gen 4 offers a significantly better connection than the Fossil Gen 3. It offers a Bluetooth v4.1 connection that connects to your phone quickly and easily. This watch includes a navigation capability, which is a novel addition to this series.

The navigation tool is extremely remarkable, but it is only useful if your phone and wristwatch are connected. There’s also a Wi-Fi connection option that lets you use the watch to surf the internet or listen to music stored onboard.

This watch gets five stars for remote features since it has capabilities such as Camera Shutter Command (take group images), Music Control, Location Tag, and more.

You can also accept or refuse incoming calls. You may also respond to SMS messages straight from your watch.

One of the important things that distinguish a smartwatch is its battery. However, it is not worth consideration in the case of Fossil Gen 4.

According to Fossil’s description, the Fossil Gen 4 has a two-day battery life, however, if you ask me, I’d say the firm is only half correct. When used in battery saver mode, it will last two days on a single charge.

The watch’s Always-On touchscreen and sleep monitoring capabilities are turned off automatically when the battery conservation mode is activated. While energy-saving is enabled, the device also goes into sleep mode.

You have to charge your watch every day if you use it very often. But Fossil’s powerful magnetic charger will fill it up in around an hour.

On this device, the system is snappy, and I’ve never observed any latency. This wristwatch is mostly used for quick alerts and a little amount of fitness monitoring.

If you are not a frequent user or don’t mind charging your smartwatch every day. If you’re searching for a smartwatch with high-end features like Google Pay, GPS, pulse rate tracking, and a variety of sports capabilities in a stylish package, this is the watch for you.