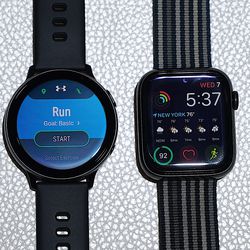 During its Unpacked 2019 event, Samsung revealed a limited-edition variant of the Galaxy Watch Active 2 in its lineup of wearable tech. It costs $30 more than the standard version and comes with software that works with Under Armour’s fitness platform already installed.

A few days ago, the company introduced the Galaxy Watch Active 2 in a variety of different configurations, such as a 40mm model, a 44mm model, a Bluetooth only configuration, and an LTE configuration. There is still one more iteration left for us to look forward to. Only the Bluetooth model of this one is available because it is the product of a collaboration with Under Armour (no LTE).

The software constitutes the most significant improvement. The Under Armour MapMyRun software, which is included in the special edition and comes pre-loaded on the device, as its name suggests, gives you the ability to track your runs in greater detail. Also, the limited edition of the watch works with the Connected HOVR shoes from Under Armour.

To make the offer more enticing, Samsung is including a six-month membership to the most valuable player (MVP) version of the app, which would normally cost $6 per month to access. The watch by itself has a starting price of $309, which is much higher than the basic edition’s price of $279.

Aside from that, the Under Armour model is exactly the same as the Galaxy Watch Active 2 that was just released. Along with the 1.2-inch S-AMOLED touch-screen and the physical buttons, it also comes with a brand new touch-sensitive strip that users can use to navigate the interface.

Under the hood, there are updated sensors for heart rate monitoring (with 8 photodiodes) and electrocardiogram (ECG), which is scheduled to be enabled in the later half of this year, in addition to an accelerometer (with the ability to measure up to 32g of force). The activity of swimming has been added to the list of sports that can be automatically tracked, and the watch now has the capability to operate as a smart assistant and translate spoken words into a different language.

In addition to the standard edition, Samsung will also be releasing the Galaxy Watch Active 2 Under Armour Edition. You will be able to place a pre-order for both on Samsung’s website beginning on September 6th, with delivery occurring toward the latter half of the month.