Since the most recent software update, the Fitbit Sense has been experiencing issues with battery drain 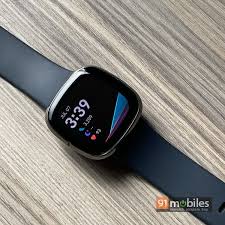 If you have been using your Fitbit Sense over the past few months and have noticed that the battery is draining faster than usual, you should know that you are not the only one dealing with this issue. The watch is not to blame for what happened. It can be said that the Fitbit smartphone app is to blame for this issue. Mostly the iOS app, but there have also been reports of issues with the Android version.

Back in late March or early April, we started seeing signs of the problem for the first time. Some consumers reported that the battery began to lose power within a day or two of normal use. To refresh your memory, it should last for at least six days after the Sense battery has been fully charged. So, what exactly is going on here?

At first, it was thought that the SpO2 app could be the one to blame for the problem. And it’s possible that this is the case in some situations. However, there is a further problem that is far more significant. Following the most recent upgrade to the iOS app, the drainage began.

Turning off Bluetooth on your phone will help you determine whether or not this is, in fact, the root of the problem. If you do that, the connection between the watch and the phone should be severed. Your Sense ought to have a significantly longer battery life as a result. The Fitbit team has the following to say about the matter:

“Our team is aware that the Sense does not maintain its charge while syncing with iOS devices, and they are working to offer a fix as soon as they possibly can. In the interim, we recommend you force stop the Fitbit app on any iOS devices you may have to prevent the battery from running down while syncing.

The conclusion is as follows. There is an error in the program’s code. If the watch is still connected to the phone, the battery will continue to be drained even after the smartphone app has been closed

As of right now, a significant number of people are still experiencing the difficulty. Having said that, a number of people (though not everyone) have reported that the issue has been fixed. Therefore, check to see that you are using the most recent version of the Sense firmware and the smartphone app. If this problem cannot be fixed, you might have to make do with short battery life for the time being. Sadly, there is no way to install a prior version of an app on an iPhone because this option is not available.

Some customers have tried performing a factory reset, and they have reported that this has increased the battery life. To give this a try, navigate to the Settings menu on your watch and select the About Sense > Factory reset option.

You could try various solutions to the problem of battery drain, but those are unlikely to be successful. In addition, requesting a replacement Sense watch will not solve the issue because the issue is not related to the watch itself.

In the meanwhile, you can get around the problem by turning Bluetooth off on your phone, restarting your Fitbit Sense, and charging it. It goes without saying that this is not an ideal or sustainable approach, but it is one that is effective. If you don’t want to turn off the Bluetooth, you can use the smartphone app to unpair Sense instead of turning off the Bluetooth.

We are keeping our fingers crossed that Fitbit will soon release a software update that is compatible with everyone. The problem of a user’s device’s battery draining too quickly has been plaguing certain users for over two months.