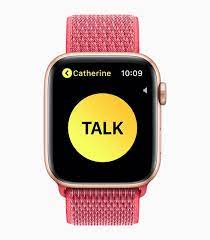 With the introduction of watchOS 5.3, Apple has given its Walkie-Talkie app a new lease on life. As a result of the software upgrade, users in Canada and Singapore will now be able to access the ECG app.

In case you forgot, the Cupertino company deactivated the Walkie-Talkie app a couple of weeks ago due to security concerns over eavesdropping. It would appear that Apple has uncovered a problem that would make it possible for an unauthorized party to listen through the iPhone of another user.

The Walkie-Talkie software, which was released a little over a year ago, gives users the ability to engage in instant voice contact over the air, just as they would on a conventional walkie-talkie device. It offers excellent audio quality and can operate over either cellular or WiFi networks.

All of the security flaws have been patched up, and the vulnerabilities that were present have been eliminated. Users who have upgraded their smartphones to iOS 12.4 and their smartwatches to watchOS 5.3 can now reactivate the Walkie-Talkie capability on their devices.

The software update also makes it possible for the ECG app to be downloaded in additional countries. The functionality is now available to users in Canada and Singapore, bringing the total number of countries with access to it up to 27. In addition to this, both countries will now be able to get information about heart rhythms that aren’t normal.

Apple received the go-ahead to deploy its ECG function from the Food and Drug Administration (FDA) at the beginning of the previous year but did not receive approval from regulatory agencies in other nations. Since then, it has been progressively expanding to include new countries.

Launch the Apple Watch application on your iPhone and navigate to the My Watch menu to bring your watch up to date. Download the software by going to the General menu and selecting the Software update option. After verifying that the battery life of your watch is greater than 50 percent, connect it to the charger and wait for the progress wheel to signal that the update has been successfully installed.