The best app to watch anime on your mobile legally 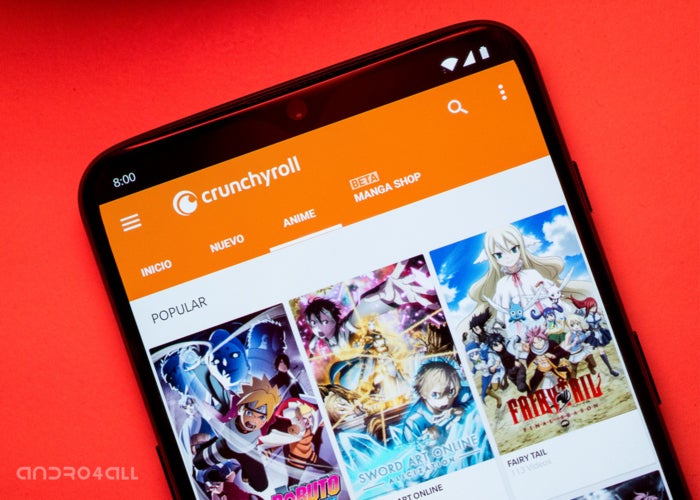 On Android there are dozens of different platforms to consume multimedia content: Netflix and HBO for series and movies, Spotify and YouTube Music for music , Play Books and Kindle for books ... But what about anime? In general, all those who want to watch their favorite anime series via mobile, are forced to resort to platforms that are either not entirely legal, or lack the most popular titles.

This, however, is not the case with Crunchyroll . Although it is still an application unknown to many, the truth is that this application, which we talked about almost four years ago , is the most famous to watch anime on the mobile legally and free , with a huge catalog where we can find some of the most popular series, with genres of all kinds and new chapters that arrive only a few hours after their original broadcast in Japan.

In 2006, a group of graduates of the University of California, Berkeley, decided to create a platform where they could upload their favorite anime chapters , so that the rest of the users could enjoy them in streaming. The beginnings of the application were not quite simple, given that a good part of the content that was hosted on the platform were chapters obtained in their original form - such as they were broadcast in Japan - and later translated by the community members themselves Crunchyroll, as well as unauthorized editions -bootlegs- of the anime itself. This caused a part of the Crunchyroll catalog to be illegal.

To avoid problems, the people behind the platform decided to comply with the corresponding copyright laws and deleted the content whenever the owner requested it. Despite this, only two years later, the company obtained a round of financing of more than 4 million dollars from Venrock, which had previously invested in Apple, Intel or Nest, among others.

With the passage of time, Crunchyroll was established as the reference platform when watching online anime , and this led the company to have access to collaborations with large companies producing anime series. In January 2009, one of Crunchyroll’s first major collaborations was made public, in that case with TV Tokyo, through which the application would feature Naruto Shippuden episodes. From that moment, Crunchyroll would begin to eliminate all illegal content hosted on the platform, in addition to blocking the upload of new content that violates copyright laws.

Today, the platform has a huge variety of anime content, in different languages ??and different themes . A detail to keep in mind is that in 2013 the opening of the Crunchyroll website for the Hispanic public was celebrated , with several anime series translated into Spanish. All this way led the platform to add more than one million users of the Crunchyroll payment variant in February 2017.

On Android, we have an official Crunchyroll application to access the platform from anywhere and watch the chapters in streaming, as well as browse through the large catalog existing today, which now exceeds more than 25,000 episodes and 15,000 hours of content .

More than ten million installations through Google Play demonstrate Crunchyroll’s superiority over other online anime consumption applications. The mobile Crunchyroll version offers everything - or almost everything - that any fan of this genre might need.

When opening the application for the first time - surprisingly, it is not necessary to log in to be able to see the chapters, although it is an action required for other things -, we directly access the complete catalog of the platform , organized in different categories, and with the series most popular on the main screen. When accessing any of the available titles, the cover image of the series in question will appear full screen, along with a synopsis, labels that indicate the themes and categories that best define the content, and the score by users of Crunchyroll Just below, the list with all available chapters will appearof the series in question. All this, with a careful design that follows the Material Design lines, and where the characteristic orange color of the platform is the protagonist.

If you find one of our favorite series, it will be possible to add a series to the Queue . In this way, we will be notified each time a new chapter is published in Crunchyroll, and they will also be stored in a list where you can access them easily and without having to search for them every time we want to see a new one.

Once you have found the series you want to watch, just click on one of the available episodes to start playing it . Before the chapter itself, an ad will appear - in case you are not a Premium user - before we go to the Crunchyroll integrated player, in which we will be able to find various controls and settings:

As in the vast majority of streaming multimedia content platforms, Crunchyroll offers a payment method with which to access all the advantages of the platform. For free, Crunchyroll users can play all the chapters they want - with ads, yes - in HD resolution, in addition to saving their favorites in a list, and browse through the large catalog of content offered by the platform.

However, those who decide to pay for Crunchyroll Premium will enjoy even more extras. For most, probably the most important advantage will be the possibility of removing all the ads from the platform , but others will consider the possibility of reproducing the new chapters just one hour after their broadcast in Japan a more valuable extra .

Finally, those who pay for the paid version of Crunchyroll, will enjoy the chapters in higher video quality , and these can be played on other platforms such as PS3, PS4, PS Vita, Wii U, Xbox 360, Apple TV, Roku and others more. These are all the advantages of Crunchyroll Premium according to the official website of the platform:

As for the price of Crunchyroll Premium, it is a monthly subscription that will cost 4.99 euros per month , a fairly acceptable and fully justified price, especially considering the wide range of series that Crunchyroll has. For a month, it will be possible to enjoy all the advantages for free.

There are few applications as complete to watch anime from the mobile as Crunchyroll , and the good reputation of the platform is more than deserved. Without a doubt, it is a mandatory app for all those passionate about the genre , especially considering that it is possible to enjoy all the content hosted on the platform for free.