The Electrocardiogram (ECG) Capability of Apple Products is Now Available; Here is All the Information you Require 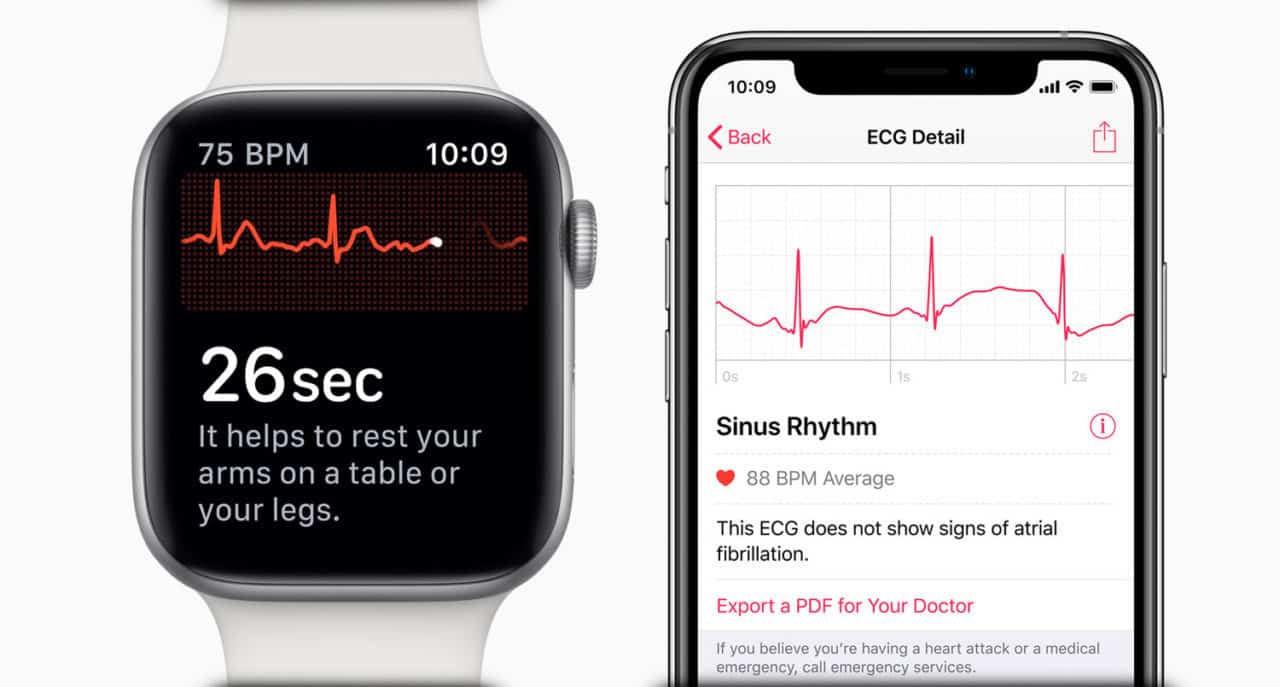 In the United States, Apple has at long last enabled the electrocardiogram (ECG) function on its Series 4 Watch. The feature is included in a free upgrade to watchOS 5.1.2, which also provides warnings for irregular rhythms in the event that the device detects atrial fibrillation (AFib). The Apple Watch is the first product of its kind to be sold directly to consumers and is notable for its ability to record an electrocardiogram from the user’s wrist.

According to Jeff Williams, Apple’s chief operating officer, “Apple Watch has benefited so many people across the globe, and we are honoured that this has become such a vital part of the lives of our consumers.”“

“Apple Watch goes to the next stage in equipping consumers with a variety of information about their health with the introduction of such cardiac functions,” said Apple.

An electrical impulse is produced by your heart with each beat that it takes. The Series 4 comes with an ultrathin chromium silicon carbon nitride layer that is coated on the sapphire crystal that is located on the back of the device. This is in addition to the optical heart rate sensor. Your wrist is used to measure electrical cardiac impulses using this. The digital crown titanium electrode is the second component of the puzzle, and it is equally as crucial as the first. Your electrical heart impulses are read directly from the tip of your finger.

Readings of the electrocardiogram are available whenever needed. While you are wearing the watch, all you need to do to take a reading is press your fingertip against the electronic crown. This puts the digital crown and the sensor on the back of the device in touch with each other. After that, the built-in electrodes will perform their function to monitor electrical impulses coming from the heart.

The generation of a pulse waveform takes only a minute and a half to complete. The new ECG application provides you with a comprehensive report that tells you whether the rhythm of your heart is normal or whether there are problems. Everything, including any notes you may have recorded on associated symptoms, is saved in the app for your convenience. The software also makes a PDF that you can email to your doctor so that you can share the information.

It’s possible that at this point you’re asking yourself, “Why on earth would I need a personal ECG?” I didn’t feel the need for it at all.

Apple claims that the ECG sensor can provide a pulse waveform that is comparable to that is produced by a single-lead electrocardiogram performed by a trained physician. This type of information can tell you whether or not your heart rhythm exhibits evidence of atrial fibrillation, which is an indication that there is a problem, or whether or not it demonstrates sinus rhythm, which means your heart is beating in a normal pattern.

Atrial fibrillation is characterized by a disordered and disorganized pattern of electrical conduction in the heart. An irregular heartbeat can affect anyone at any age, and its causes are diverse, although it is more common in people who are over the age of 60.

Some of the symptoms are feeling faint, weak, and exhausted. Many people don’t have symptoms of the disease, which makes it difficult to diagnose. The challenge lies in recognizing it in a timely manner. People with irregular heartbeat can stay as active and healthy as they want to be with the right medical treatment and some changes to their lifestyle.

Apple acknowledges that its electrocardiogram (ECG) monitor will not perform perfectly, but the company believes it will be especially helpful to people who have no knowledge that they have the illness. When this kind of information is put together, it will open up exciting new ways to look for links to other diseases as well.

The Centers for Disease Control and Prevention (CDC) estimates that the illness affects between 2.7 and 6.1 million people in the United States. This particular subset of the population would benefit tremendously from the use of the device. Abnormal cardiac rhythms are the underlying cause of more than one hundred thousand strokes each year. As a result, while the electrocardiogram (ECG) sensor is useless to 99 per cent of the population, it still has the potential to save lives.

And this is a huge problem, provided that the sensor does not produce a lot of false positives! According to the author of the aforementioned piece in Wired, if that ends up being the case, the possible costs could end up outweighing the benefits. Apple has issued a warning as a result of this situation.

“The electrocardiogram (ECG) app is designed to be used for over-the-counter (OTC) purposes. The electrocardiogram (ECG) data that is provided by the ECG app is strictly for informational purposes. The output of the device should not be interpreted by the user, nor should the user take any medical action based on the output of the device without first consulting a competent healthcare practitioner. The ECG waveform is not meant to replace other methods of diagnosis or treatment. Instead, it is meant to help classify rhythms so that AFib can be told apart from normal sinus rhythm.

It is against the terms of service for anyone under the age of 22 to use the ECG app.

This authorization from the FDA for these assessments, which are the first of their type, has been granted to the corporation. The Food and Drug Administration (FDA) of the United States has just lately introduced a regulatory framework that is less stringent for a select group of pre-selected businesses. When seeking clearance from the market for a product, businesses will need to submit less information under these circumstances. Apple has used this faster registration process to protect its intellectual property, there is no doubt about that.

In order to utilize the ECG app on your watch, you will first need to install the most recent version of the watch’s software. First, ensure that your mobile device is running iOS 12.1.1; otherwise, you won’t be able to see the watchOS 5.1.2 update. After that is finished, you should put your Apple Watch on charge while ensuring that its current battery level is greater than 50 per cent. Launch the Watch app on your iPhone, navigate to the General menu, and then select the Software update option. After that, select the Download and Install option to accomplish the upgrade.

The Apple Watch will also now analyze your heart in the background via the optoelectronic heart rate monitor and warn you if it notices an abnormally high or low pulse rate. This further blurs the line between a fitness band and a medical gadget, which is something that has been happening for some time. This detector will also perform periodic analyses of your cardiac rhythms and inform you if it has a suspicion that you are experiencing atrial fibrillation. In essence, two different sensors will be watching the person for irregular heart rhythms.

Tim Cook, CEO of Apple, has stated that the Apple Watch has evolved into an “intelligent custodian for your wellness.”

At this time, the capabilities of the ECG are not available outside of the United States. It was hoped that a straightforward adjustment to the system’s regional settings would serve as a remedy, but it appears that this will not be the case. If it turns out that the feature is exclusively available in the United States, selling the Series 4 in other countries will be considerably more difficult. We think it will be used in a way similar to how Apple Pay is used: at first in a small number of countries and then slowly expanding to cover more.