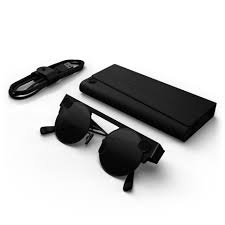 The third iteration of Snap’s smart glasses, which have the appearance of regular sunglasses but contain electronic components, was introduced today. They implemented a dual HD camera system that is capable of capturing scenes in 3D.

It is clear that the firm has no intention of abandoning the Spectacles concept, as each new version is an improvement over the one that came before it. The third generation of Snapchat Spectacles has a design that is unquestionably more streamlined and smaller than its two previous iterations.

Snap claims that each pair of glasses is hand-made from a single sheet of high-strength stainless steel using traditional techniques. The lenses have a round shape, and they have acetate tips that can be adjusted. They are attached to a lightweight metal frame.

This version takes a novel approach by shipping with two high-definition cameras that are both capable of shooting in 3D. They are built to interpret the depth of your immediate environment and are situated on opposite sides of the front of the glasses. They accomplish this by computing the distance between the person wearing the device and the things that are in their immediate environment.

The Memories feature of the Snapchat app is where users can make their captured photographs and videos more fascinating by applying a variety of different 3D video effects after they have been wirelessly synced there from the camera. This might take the form of anything, from a soaring virtual bird to confetti dropping in real time.

You can accomplish the same thing with still photographs and generate little animated GIFs that provide the impression of depth. The app will make it possible for you to export everything to the camera roll of your smartphone and share it with other people.

A button can be tapped to initiate the recording mode, and once it is, video will be collected for the next sixty seconds. Those who are around you will be alerted to the fact that you are filming them thanks to the indicator lights that glow in a white circle around one of the cameras. At the same time, the four different microphones built into the picture frames pick up sounds.

Videos are captured at a frame rate of 60 per second at a resolution of 1216 pixels wide by 1216 pixels tall. When taking photographs, a resolution of 1642 x 1642 pixels is used. There is a total of 4 GB of storage space, which is enough for about 100 movies or 1,200 pictures before you have to sync.

The specifications come with a rather high price tag of $380, which is an unfortunate piece of news. In the event that this does not put you off, Snapchat Spectacles 3 will be offered in two different colors, namely carbon and mineral. Both are expected to be delivered in the fall of this year, but you can place your pre-orders right now.

To this point, the company’s spectacles idea has been met with a combination of success and failure. The first version was such a dismal failure that, after all the early excitement, there was still a significant amount of unsold inventory sitting in warehouses. The outcomes were favorable for the subsequent generation. It’s possible that this is why Snap is being so reserved about what it expects from the third generation device.

According to a statement made by a Snap spokeswoman, “We’re putting it out there with the purpose of learning about some key topics.”

“We’re not aiming to sell a billion of these,” said the sales representative.