The fight of the affordable fitness bands: Xiaomi Mi Band 5 vs Realme Band 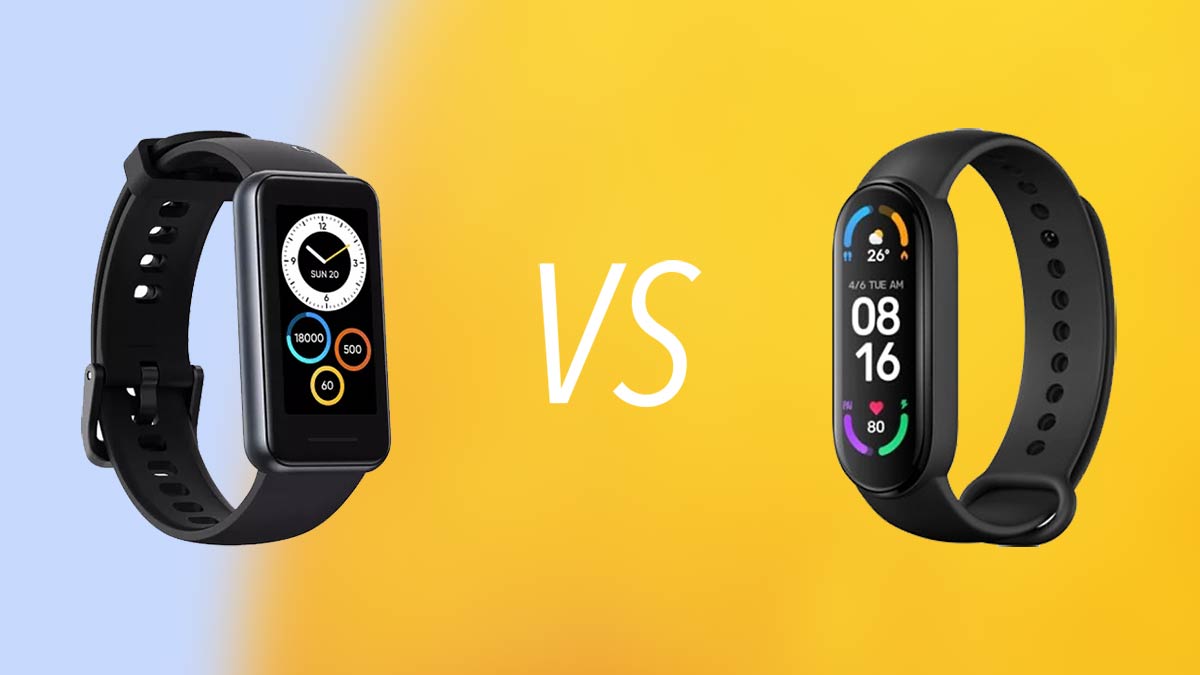 Realme Band vs. Xiaomi Mi Band 5 in general and hardware

Realme Band vs. Xiaomi Mi Band 5: Which Is Better?

Realme’s first foray into fitness tracking is a low-cost activity bracelet. The tracker, which was released in March, has a heart rate sensor, several sports options, and a long battery life. After that, the company released its first smartwatch a few months later.

Xiaomi isn’t a newcomer to the wearables market. Its Mi Band is one of the greatest cheap fitness trackers on the market right now. Generation 5 has just been unveiled, and it includes pretty much everything you’ll need for basic activity tracking.

Realme’s entry into the low-cost activity tracker industry has sparked some fierce competition. Here’s how it stacks up against the Xiaomi Mi Band 5.

Realme Band vs. Xiaomi Mi Band 5 in general and hardware

There’s no mistake who these two are with their rubberized, no-nonsense styles. They appear to be standard fitness bands. However, the Xiaomi Mi Band has a more squared-off appearance, whilst the Realme Band looks a lot like the Fitbit Inspire HR.

There is a color display on both of these. The one on the Mi Band 5 is larger, measuring 1.1 inches as opposed to 0.95 inches. There’s also a variation in the quality of the display. The Xiaomi has a significantly higher screen, with a resolution of 126 x 294 pixels. Realme’s resolution is only 80 x 160.

Another distinction is navigation. In addition to a physical button, Xiaomi’s smartphone boasts a complete touchscreen. You’ll be limited to solely using the Realme band’s physical button.

With a combined weight of roughly 20 grams, you’ll barely notice either of these two on your wrist. However, the Xiaomi Mi Band 5 outperforms the Realme Band in terms of water resistance. Its 5 ATM certification allows it to be submerged to a depth of 50 meters. Realme’s device has an IP68 designation, which means it can only withstand water up to 1.5 meters deep.

Neither has a very premium appearance, but you can dress them up with various colored or material bands to make them your own. You’ll be satisfied if you’re looking for a sporty look.

The battle of the inexpensive fitness trackers: Xiaomi Mi Band 4 vs. Realme Band 2:

The gadgets share a 3-axis accelerometer and an optical heart rate sensor in terms of sensors. A gyroscope, barometer, and capacitive proximity sensor are also included in the Mi Band 5.

Then there’s the crucial battery life. Because of its large lithium-ion battery, the Mi Band 5 may last up to 20 days on a single charge. The battery in the Realme Band is merely 90 mAh. You can get up to 9 days’ worth of fitness monitoring out of this.

Both are charged in various ways. Charging the Realme is as simple as slipping out one end of the silicone band. This reveals a USB-A connector that can be inserted into a USB port, eliminating the need for wires to be lost or tangled in the process. In the case of the Mi Band 5, charging is done with the use of a magnetic charging dock. As a result, unlike the previous generation, there is no need to remove the unit from the band.

The table below shows all of the design and hardware changes between the Xiaomi Mi Band 5 and the Realme Band.

Smart features and activity tracking on the Xiaomi Mi Band 5 and Realme Band:

If you’re looking for a low-cost fitness band, the Xiaomi Mi Band 5 and Realme are both good choices. They’ll both keep an eye on you 24 hours a day and can track a wide range of sports. 24/7 heart rate monitoring, step tracking, distance traveled, active minutes, calories burnt, sleep and inactivity reminders are all included.

The Xiaomi Mi Band has the benefit of having Connected GPS. This implies it can tap into the satellite signal on your smartphone. When exercising outside, this allows for more precise distance recording.

Mi Band 5 also includes female health tracking, a barometer, and a tried-and-true software ecosystem, as well as more precise sleep tracking statistics and sleep disorders. Realme’s software is very new, as this is the company’s first attempt at fitness tracking.

The Mi Band also offers an advantage in terms of smart functionality. It offers smartphone notifications, alarms, and a variety of watch faces, just like the Realme. It does, however, include an iteration with built-in NFC. This card can be used to make AliPay and WeChat Pay payments. It also comes with smartphone music control and a “Find My Band” feature in the app in case you can’t find the wearable.

Realme Band vs. Xiaomi Mi Band 5: Which Is Better?

The Realme Band is a somewhat less expensive option than the Xiaomi Mi Band 5. But, let’s be honest, neither of these two will set you back a fortune. The first costs roughly $25, while the second costs around $40. (Check price on Amazon).

As a result, we recommend the Xiaomi Mi Band (view on Amazon). On the other hand, if you’re on a limited budget or already a fan of Realme’s products, sticking with their brand may make more sense.