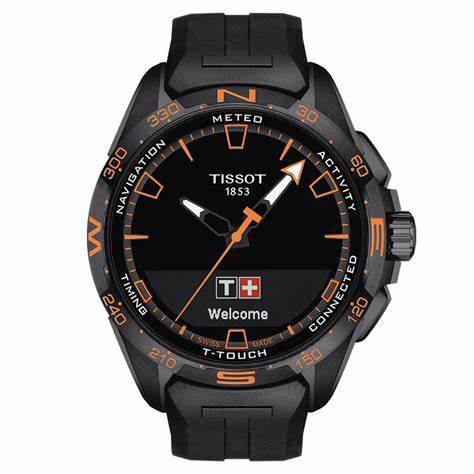 The Swatch Group has introduced the world’s first genuine smartwatch. The T-Touch Connect Solar is a hybrid that blends a classic appearance with interconnected capabilities and solar energy. It gets its name from this hybrid’s connection to the internet.

The Tissot brand name is shown on the device. For the benefit of those who are unaware, Tissot has been a part of the Swatch Group as a subsidiary since 1983. The Tissot watches are considered products for the “middle market” by the Swiss company that manufactures them.

The solar cell that is built into the dial of the watch is the most interesting feature of the watch, even more so than the fact that it is constructed to a high standard in Switzerland. Because of this, in conjunction with a specialized ultra-low power operating system, the clock has the potential to continue functioning for up to half a year. It is reassuring to know that you will only need to use a charging cord two times per year. According to Tissot, the watch can keep accurate time for a whole decade on a full charge when used in its most basic mode.

In combination with a step and distance counter, activity monitoring, alarms, and other features, the smart part of the gadget is alerts received from a phone that has been associated with it. All of this information may be viewed whenever desired in the lower third of the dial on a little display located there. When checking notifications, the watch hands will automatically shift out of the way.

This thing uses a specialized version of the SwALPS operating system. The Swiss Autonomous Low Power System is what the initials stand for as a whole. It is said that the operating system only needs a small number of software updates over the air and that it provides a higher level of protection for user information, both of which are characteristics of a product that is built in Switzerland.

The complete set of specifications has not yet been made public. The video that follows depicts a biker, but taking into account the claimed battery life of six months, it is likely that GPS is not built-in. Tisson has stated that it will implement GPS navigation in the second half of this year (we are assuming that it will be a connected GPS), in addition to providing updates about the weather and alerts from its partner brand, the National Basketball Association. Unfortunately, it also appears as though there is no sensor for the heart rate.

According to Tissot, “We wanted this wristwatch to be a true timepiece.” Therefore, it features a water resistance of up to 100 meters, a ceramic bezel, a titanium case, and a sapphire crystal.

Recently, the Swiss watch industry as a whole, including Swatch Group, has been dealt a double blow as a result of their exposure to the slowing market in China as well as the growing popularity of smartwatches. As a result of the economic slowdown, some watchmakers have been forced to change their focus toward producing more luxury timepieces. Others have dabbled in the rapidly expanding market for wearables through strategic collaborations with technological companies and financial investments. The Touch Zero One was Swatch’s most recent attempt to get into the market for smartwatches. It was first marketed for beach volleyball players and was released in 2015.

Nick Hayek, the CEO of the company, believes that smartwatches are more of a wonderful opportunity and potential than they are a threat to the company.

“When Apple made the decision to bring out the Apple Watch, it was great news for us since nobody purchases an Apple Watch with the intention of wearing it constantly on their wrist. You make the change, “he stated in a conversation with CNBC that took place a year ago.

“You are aware that the name Swatch does not refer to a Swiss watch but rather a second watch. The concept behind Swatch, and the reason for its brand name, is that you do not need to limit yourself to just one watch at any given time. You adjust the time on your watches.”

The Tissot T-Touch Connect Solar is compatible with mobile smartphones running iOS, Android, and Huawei’s own Harmony OS. It has a diameter of 47 millimeters and will be sold in Switzerland beginning in June of the year 2020. Ceramic and titanium iterations will be available, with prices beginning at 1,000 Swiss Francs (about $1,000 USD). The product should then become available on a global scale not long after.