The Fitbit Versa 2 has received certification from the FCC and the Bluetooth SIG; the launch is almost here 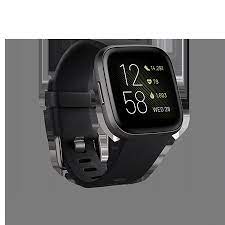 The FCC and the Bluetooth SIG have both approved the Versa 2 device. The certification granted by the two registration organizations substantiates the speculation that Fitbit’s smartwatch lineup would soon undergo an update. There have been rumors and leaks, but these are the first formal confirmations of what has been reported.

This link will take you to the FCC filing that was submitted. However, there are only a few photographs that show how to obtain the E-label instructions. This does not disclose a great deal of information. In and of itself, this is not particularly fascinating, but the page does display a few screenshots of the forthcoming tracker. These confirm that the pictures that were posted online earlier are real (there is one physical button, the screen is bigger, and there is no Fitbit logo under the screen).

It is important to note that the document in question does not refer to Versa 2 by that name. However, it may be found in the Bluetooth certification, which originates from the Bluetooth SIG, the organization that is in charge of the development and licensing of technologies of this kind.

Since August of last year, when it certified the Charge 3, the Inspire range, and the Ace 2, this is the first new Fitbit item to be added to the Bluetooth SIG register. Even though it was only released a few months ago, the Versa Lite database entry was actually created in 2017 at the same time as the original Versa entry.

According to Bluetooth SIG, the tracker is a “Wireless Activity Smartwatch to track steps, distance, sleep, and calories burned.” It also monitors the wearer’s quality of sleep. Caller ID information is displayed if your phone is within range. Sync statistics remotely to mobile devices and desktop computers. “

To our good fortune, we are aware of more than this. According to information that has surfaced previously, the gadget, like the Versa Lite, will just have a single physical button. The display continues to remain in the shape of a square, but the bezels have been shrunk down, and the Fitbit logo has been removed from the area below the display where it was taking up superfluous space. Following this link will take you to some further pictures of the Versa 2 that we have.

The tracker includes everything that is included in the most recent version. This features all of the fitness monitoring smarts, water resistance down to a depth of fifty meters, storage for more than three hundred songs, and support for Fitbit Pay.

According to reports, one of the changes will be an AMOLED screen. In contrast to the version that is currently available, the display will remain active at all times. This should not have any effect on the battery life, which is expected to remain at approximately 4 days.

Alexa integration is another intriguing feature that has been added. You will be able to use Versa 2 for a variety of tasks, like controlling your smart home, requesting weather information, and more.

All of this points to the fact that the next version of Versa will be a rather minor update, without any truly ground-breaking features included. The PulseOx sensor is not mentioned anywhere, but it is reasonable to assume that it will also be integrated. We have been waiting for Fitbit to put it to good use for quite some time now, and it has been a few years.

The recent listings provide evidence that a launch is quickly approaching. Previous rumors have suggested that Fitbit will make an announcement on the device at the end of the month of August, with the release date set for September 15th. This suggests that the tracker will likely make its debut at IFA 2019, which runs from September 6 to September 11.