The Galaxy Watch Active 2 has been approved by the FCC, and it is likely to come out in August 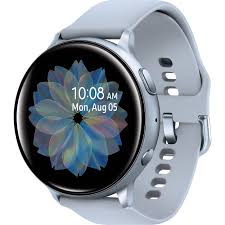 We had heard rumors that Samsung was developing a successor to the Galaxy Watch Active, but this is the first time we’ve heard it officially confirmed. The Federal Communication Commission (FCC) just updated their Registrar to include the device.

The information lends credence to what we previously suspected. The circular-shaped device will be available in a 40mm model; it will have protection from Gorilla Glass DX+; it will be water resistant to a depth of 5 ATM; and it will have built-in GPS.

According to the documentation provided by the FCC, there are two different versions: one is made of aluminum, while the other is constructed of stainless steel. Even though the bigger gadget isn’t mentioned in the FCC application, it seems likely that the watch will also come in a 44mm size.

The fact that the label refers to the Samsung Galaxy Watch and not the Samsung Galaxy Watch Active is another source of misunderstanding about the product. However, judging by the statements of other media sites and the information that has leaked out, it appears that the general opinion is that Watch Active will undergo a second iteration. which is a bit weird when you consider that the first version of the device was just released five months ago.

The verdict is yet to be given on whether or not this turns out to be accurate. On August 7th, during Samsung’s Unpacked 2019 event, the watch is likely to make its first public appearance. The fact that the FCC just processed the registration is more proof that the launch will happen very soon.

A year ago, Samsung introduced the very first iteration of the Galaxy Watch. Could it be that instead of Watch Active, we are going to witness the second edition of this device? We won’t have to wait long to find out.

This is the closest we’ve gotten so far to making the announcement officially. The Federal Communications Commission (FCC) is an independent agency of the United States government that governs interstate and international communications by radio, television, wire, satellite, and cable. Samsung has not commented on this matter as of yet.

Follow this link to get the whole list of features and specifications for the future device. These are followed by a few photographs of the rumored Galaxy Watch Active 2, which you can view below.