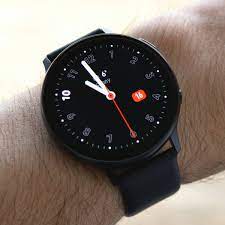 Galaxy Watch Active 2 was among the products that Samsung announced today. Because the timepiece was the target of multiple leaks over the previous few weeks, the majority of the specifications were already public knowledge prior to its official unveiling.

Given that the initial iteration of the watch was introduced a little less than half a year ago, it’s possible that owners of the first generation device won’t be too thrilled to learn of the news. The Watch Active 2 has a brand new appearance, a variety of designs, and size possibilities, as well as ECG sensors, an LTE model, and other features.

Everything that you need to know is included below

As can be seen in the photos, Samsung is deviating just a little bit from the tried-and-true design formula of the first version. The recognizable bezel will not be making a comeback, unfortunately. On the other hand, you can navigate the watch using the touch-sensitive strip that is located along the black border that surrounds the screen. This border is located around the watch face. This is in addition to the capacitive touchscreen as well as the physical buttons, of course.

In the original iteration of the watch, the bezel was removed; however, it appears that Samsung has developed a technique that is much more effective. You can watch the demonstration video that explains how this works down below.

Alterations to the design also include the use of a circular home/power button with a red circle surrounding it, as opposed to a rectangular button. The back of the watch has also been updated, and the circular ring that surrounds the heart rate sensor is one of the new features.

More interestingly, Samsung has provided a selection of sizes for this iteration of the product. The first generation of the Galaxy Watch Active was only available in a 40mm size. The second version adds support for the 44mm format as an additional option.

You have a multitude of options to select from when it comes to the straps, including stainless steel (for the Bluetooth version), lightweight aluminum (for the LTE variants), and more. Additionally, Samsung is making it much simpler to personalize the watch faces on its products. Take a picture of yourself wearing whatever you choose, and the device will design a watch face to complement it.

According to the leaks, the watch would feature an electrocardiogram (ECG) monitor and maybe fall detection as well. This, on the other hand, will occur at a later period. This means that the feature is present, but it has not yet been activated.

According to Samsung, the presence of all eight photodiodes on the back of the device improves its ability to monitor the user’s heart rate. Better precision will be combined with warnings that notify the patient if their heart rate deviates significantly from the norm.

Aside from that, it does not appear like there is a great deal of fresh information. The exercises that are automatically tracked now include swimming, which was recently added. This takes the overall number of exercise options up to seven, including walking, jogging, cycling, rowing, elliptical training, and “other workout.” You will need to go with the manual option in order to complete any other kinds of workouts. There is a “coach” option that provides you with actionable advice in real time for when you are jogging.

If you look at the photographs more closely, you’ll notice that there is a little hole in between the two physical buttons. This is done so that there is room for a microphone hole. This allows you to speak a language that you want to translate and use the smart assistant at the same time.

The rest of it is pretty ordinary stuff and includes the typical tracking of stress and activity around the clock. In addition to that, you will do breathing techniques that will help you relax. There is near-field communication (NFC) for mobile payments, as well as a global positioning system (GPS) for tracking workouts even when a phone is not there.

Samsung is still selling models from both eras, although the pricing for each have been adjusted. In the United States, you may anticipate the Watch Active 2 to begin at a price of $279. On the website of Samsung, pre-orders may now be placed, and the company plans to begin sending out packages on September 27. Those who place a pre-purchase will receive a free Portable Wireless Charger in addition to their order.