The Honor Band 5 has been officially unveiled, and it comes with all new health features 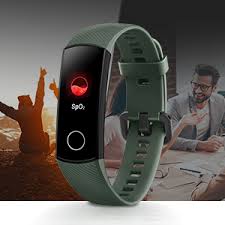 An event held in China this morning served as the venue for the official unveiling of the Honor Band 5. The design of the fifth generation tracker is largely similar to that of its predecessors, but it comes equipped with a variety of innovative health functions.

The version that came before it has been around for nearly a year now. Most people agree that the device is a great replacement for the Xiaomi Mi Band because it costs the same and has similar features.

We were aware that Honor Band 5 was making significant progress. Even Huawei’s CEO, Zhao Ming, tweeted an image of the wearable on Chinese social media platform Weibo at one point. On the other hand, we did not become aware of all of the specifications until today. The budget activity band was shown for the first time at the same event that showed off the Honor 9X series.

The appearance of the Honor Band 5 is not drastically different from that of its predecessor in terms of design. The color display and the virtual button that runs along the bottom border have not been altered.The newer models have a more advanced 0.95-inch AMOLED 2.5D color screen with a resolution of 240 by 120.

However, there’s a lot of interesting stuff going on behind the scenes. The inexpensive fitness band will soon be releasing a few innovative features, the likes of which are not something you would anticipate finding on a product at this price point.

The fitness tracker can detect your blood oxygen levels, alert you to poor sleep, monitor your weariness and listlessness, and even notify you of hypoxic dizziness. This final one is a condition in which your blood does not have enough oxygen to meet the requirements of your body. For those who are not aware of this, let me explain. In most cases, it is brought on by conditions that affect either the heart or the lungs. It goes without saying that this is potentially a very dangerous condition.

There are hardly any fitness trackers on the market that have a blood oxygen sensor. The Garmin Vivosmart 4 is probably the one that has the most name recognition among all of them. During the night, it will monitor the levels of oxygen in your blood, but during the day, users will have the option to manually take a reading. This is the first time that the feature has been added to a high-quality, low-cost activity band that we have seen.

The Honor Band 5 does, of course, come equipped with all the wonderful qualities that its forerunner did. This involves monitoring your activity, heart rate, and sleep, in addition to ten different types of sports, one of which is swimming (5 ATM water-resistance).

In addition to the standard alerts for incoming calls and messages and a function to mute incoming calls, this phone also has an NFC chip that enables users to make payments while they are on the move. Everything is powered by a battery with a capacity of 100 mAh and a run time of up to 14 days.

The Honor Band 5 is available in two different editions: the normal edition is priced at 189 yuan ($27), and the NFC version costs 219 yuan ($31). The NFC edition will be available for purchase beginning on July 29, while sales of the first one will begin in China later today. The band can be purchased in three different colors, including black, blue, and light pink, respectively.