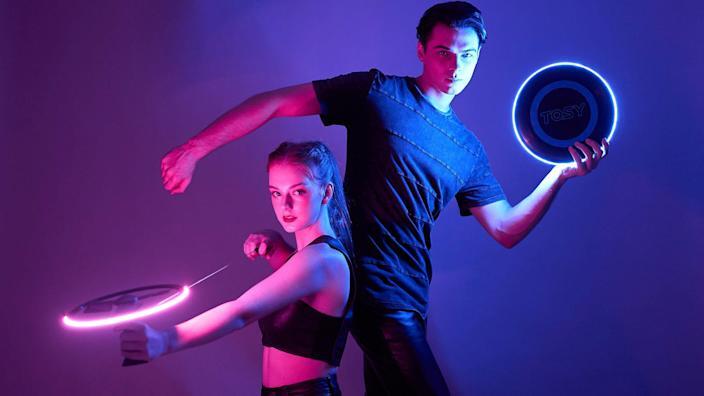 Every activity, from tennis to soccer, is beginning to see a cautious but steady integration of technology. It is generally agreed that boomerangs were perhaps the earliest heavier-than-air flying vehicles developed by humans. It has been discovered that some of them are as ancient as 10,000 years. It is now time for the next stage of development; specifically, it is time for boomerangs and frisbees to acquire intelligence.

A new project has been posted on Kickstarter with the intention of filling that need. Something that propels flying disks to a whole new level of fun and excitement. The Tosy Flying Duo is equipped with a variety of game settings as well as 360 LEDs that are very bright all around the disk.

In terms of construction, the object satisfies the standards that are often placed on a flying disk. It weighs 175 grams and has technology that has been granted a patent. Compared to the conventional method, it enables catching to be done in a manner that is both safer and simpler.

The Tosy Flying Duo has a vertical range of up to 50 feet and a horizontal range of up to 100 feet while it is flying. Also, if you toss it the right way using the launcher that comes with it, it will come back to you. You could also simply use it like a frisbee. Therefore, you get two uses out of one product.

The LEDs themselves provide the second element of originality. You have control over the lights thanks to the six various timer modes and the six varying brightness settings that are customizable. When playing during the day, you may want to use a brighter setting, and when playing at night, you might want to use a darker setting. Just watch out that none of your neighbours takes it for an alien spacecraft!

The organization that is responsible for making the product is now working toward receiving formal clearance from USA Ultimate. This is the organization that is responsible for the sport of ultimate, which is played in about one hundred different nations. However, it is the United States that is home to the greatest player base, which is believed to number in the tens of thousands.

To put it another way, this is a sport that does not include any physical contact and is played by two teams of seven players each. The winner is determined by whichever team scores the most goals. A player scores a goal in a manner similar to that of football when they successfully catch a legal pass in the end zone.

In light of this, the Tosy Flying Dude is equipped with a game mode called Professional Ultimate. In the event that the disk is not tossed within 7 or 10 seconds, the light may be programmed to flash. If the disk falls to the ground, it will also cause the LEDs to flash, indicating that the game has begun anew. Arguments over disputed stalls during Ultimate games should become a thing of the past thanks to the implementation of this rule.

As can be seen, the Tosy Flying Duo is more than simply a frisbee with LED lights attached to it. There’s a lot more to it than that. You have the option of purchasing it in one of the following colours: purple, blue, white, green, red, or yellow. The Duo was made for players of all ages and skill levels, and its pieces are designed to nestle snugly inside one another for portability. Everything can be charged using a USB-Type C port, and the battery life will endure for a significant amount of time.

The boomerang that comes with a launcher, as well as the flying disk, can be purchased for $96. This is a discount of 20% off the full retail price. A few days after the debut of the project, the modest target of $25,000 that was set on Kickstarter has already been exceeded many times. It is anticipated that supporters will get their rewards around November.