Two maps compare the prevalence of obesity in America and Europe 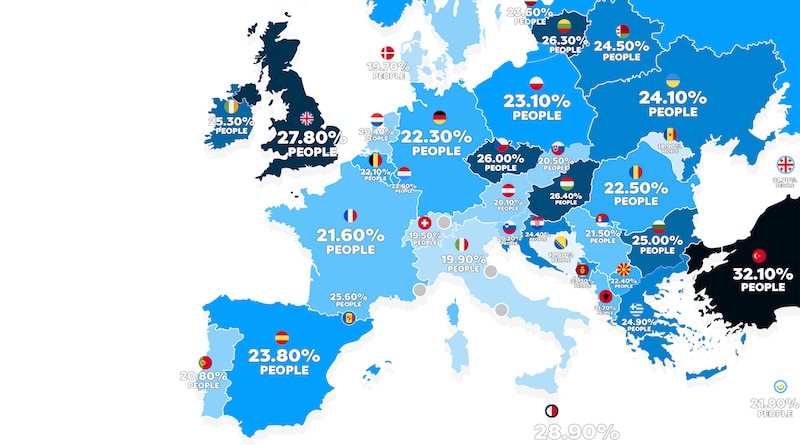 According to statistics, the percentage of people who are overweight has increased by more than twice as much in the last 30 years. Each year, illnesses brought on by obesity and its effects claim the lives of over 3 million individuals globally.

A person’s weight and height are used to calculate their body mass index (BMI). For individuals aged 20 and older, the generally recognised BMI ranges are underweight: less than 18.5 kg/m2, normal weight: between 18.5 and 25, overweight: between 25 and 30, and obese: greater than 30. Your chance of developing significant health issues like heart disease, type 2 diabetes, a stroke, and some malignancies can increase if your values are higher.

The severity of the issue is revealed by a few maps. The first one displays European obesity rates. Turkey is at the top—or, more accurately, the bottom—of the list, with close to one third of the populace being deemed clinically obese. A handful of Eastern European nations are next, with the UK not too far behind at 28%.

Two maps compare the prevalence of obesity in America and Europe.

A close examination of the map demonstrates that obesity rates and poverty levels are not directly related since the issue is more complicated. On the one hand, the lowest obesity rates are seen in the nations that are regarded as being among the poorest in the region. Bosnia (17.9%) and Moldova (18.9%) are included in this.But Switzerland, Denmark, and Italy—three high-income nations—come in second and third place, respectively. This may show that poorer nations do not have easy access to greasy foods, which would explain their lower obesity rates, whereas extremely wealthy nations have been able to create healthy substitutes.

What about the US, though? Obesity rates in the US are among the highest in the world, despite significant rises in many developed nations. American adults are now regarded to be overweight or obese in more than 2/3 of cases. One in twenty people has excessive obesity.

On the US map, adult obesity rates are currently greater than 35% in five states; 30% in 25 states; and 25% in 46 states. Adult obesity rates range from over 37% in West Virginia and Mississippi to just over 22% in Colorado and the District of Columbia.

The bad news is that European nations perform better than the majority of US states. The good news is that obesity rates appear to have stabilized recently.

Two maps compare the prevalence of obesity in America and Europe.

Part of the problem is inactivity. Amazingly, a lot of individuals neglect to take a quick 10-minute stroll each month. Regularly walking quickly enough to make your heart race not only aids in weight reduction but also lowers your chances of diabetes, cancer, heart disease, and stroke.

It doesn’t matter if you exercise for the recommended 150 minutes per week of moderate activity. The right way can be reached with any step. Especially when compared to just lounging about! As long as it’s reasonable, you want to stop moving as little as possible.

The key is to move more and eat well. If you put in the hard effort and discipline required to support it, a fitness tracker can be helpful.