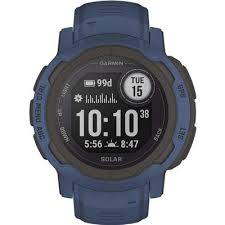 Detailed comparison of the Garmin Instinct 2 vs. the original Instinct

Compared to its predecessor, the Garmin Instinct, the Instinct 2 offers a significantly longer battery life

The following is an explanation of what to anticipate from each of the available options:

Today, Garmin has officially unveiled Instinct 2 to the public. The manufacturer calls it a GPS watch that is rugged enough to be worn in the great outdoors. It comes with a wide variety of helpful enhancements in comparison to the previous version. On Garmin’s official website, the non-solar variant may be purchased for $349.

Back in 2018, sales of the original model began, and in 2020, a solar-powered edition was released to complement the original. In addition to that, there was an interim eSports edition that had a specific eSports activity profile. All of those watches were redesigned iterations of the basic model that featured a few subtle enhancements here and there. The next iteration of this device is now available.

Since it has been around three years since the initial release of the Instinct, it should come as no surprise that the updated version includes a significant number of new features. This offers a variety of different size possibilities, a significantly longer battery life, a multitude of performance measurements, NFC, and even more.

Here is everything you need to know about the comparison between the Garmin Instinct 2 and the original Instinct. Should I upgrade to this version? Continue reading to discover.

Detailed comparison of the Garmin Instinct 2 vs. the original Instinct

To begin, this is the first time that we have offered an S variant of the Instinct. Because of this, the watch will become more well-liked among women who enjoy being active outside and among people who have small wrists. It has dimensions of 40 by 40 by 13.3 millimeters, whereas the standard version has dimensions of 45 by 45 by 14.5 millimeters.

Both of these are thinner than their predecessors because technological advances have resulted in smaller components that consume less power. The weight of the normal version, which is still 52 grams, has not altered, but the 2s version is significantly lighter at just 42 grams. In case you were wondering, there is not an X size available because the watch is already fairly large.

As was the case before, there are other distinct editions available in addition to the primary one. Camouflage, Tactical, Surf, and Esports are some of the options. A brand-new one is DEZL. It is tailored to meet the needs of commercial truck drivers. This one makes it possible to work out during brief stops and contributes to the promotion of a healthy way of life when traveling. You can also link it to the DEZL app to gain access to reward programs and receive updates regarding impending decisions regarding weigh stations and bypasses in the United States.

The robust watch comes in multiple iterations, each of which maintains the same 100-meter water resistance and military-grade rating as its predecessors. The construction is resistant to shock, with a case made of fiber-reinforced polymer and Corning Gorilla glass that is resistant to scratches. The component can withstand high temperatures as well as stress.

The display is essentially the same as it was before, which means that it is monochromatic, sunlight-visible, transflective memory-in-pixel, and has a custom design with two windows. This item’s standard edition has dimensions of 0.9 inches by 0.9 inches, while the S version’s dimensions are 0.79 inches by 0.79 inches. In contrast to the original, both of these have a marginally higher resolution than both of them. Version 1 of the Instinct had a resolution of 128 × 128 pixels, whereas version 2 had a resolution of 176 x 176 pixels. The more compact S model only has 156 by 156 pixels to work with.

You will receive various global navigation satellite systems (GPS, GLONASS, and Galileo – multi-band GNSS) in addition to the built-in 3-axis compass and a barometric altimeter that were previously included. The most recent iteration of the Elevate, version V4, includes a number of enhancements to the heart rate sensor. The values for blood oxygen and respiration should also become more reliable as a result of this change. SpO2 is now included with every edition, whereas it was exclusive to the Solar version of the game in the past.

There is a change in the placement of the barometer hole. This may indicate that the manufacturer has upgraded the barometer sensors in the newer edition to a larger size because the prior model had problems with the sensor. After all, it was too small and could quickly become clogged with dirt, filth, and water.

RAM has also been increased by an additional 16 MB, bringing the total amount of memory available to 32 MB. In addition to that, you will now have the NFC chip. This means that you can make payments with the watch when you are out and about.

Compared to its predecessor, the Garmin Instinct, the Instinct 2 offers a significantly longer battery life

The duration of the battery life is one aspect that has been significantly improved. In fact, Garmin asserts that the Solar models of the Instinct 2 may function as a smartwatch or battery saver watch eternally. This is based on the assumption that you spend at least three hours every day in bright or sunny weather outside (specified as 50,000 lux conditions). In smartwatch mode, version 2s will not be able to run indefinitely on solar power, but it will be able to do so in battery saver mode.

Even beyond Solar, there have been advancements in battery life, which is rather remarkable when considering the increase in specifications between generational iterations. In smartwatch mode, the basic model may last for nearly a month, which is equivalent to four days; in Battery Saver Watch mode, it can last for nine days. The GPS will continue to function for around 30 hours even without the assistance of solar power.

The following is an explanation of what to anticipate from each of the available options:

The Instinct is a robust GPS watch that was designed specifically for people who enjoy being outside. This aim supports many Global Navigation Satellite Systems (GNSS), includes ABC sensors, and offers Trackback Routing, among other features that are useful for tracking outdoor sports.

A great number of software enhancements have been included in the second generation. Users are provided with an overwhelming quantity of performance metrics to begin with. The first version is so lacking in functionality that it cannot even generate VO2 Max readings. You are now provided with the majority of the features that are available on the Forerunner series.

As was previously stated, blood oxygen levels are now included on all watches, which enables spot checks and auto monitoring when sleeping and throughout the day (depending on settings chosen). In addition, you will receive a respiration rate that is displayed 24 hours a day, seven days a week, a Fitness Age, an advanced Sleep Score and insights, a Health Snapshot (which displays raw HRV data), HIIT exercises, and a variety of additional sports activity profiles.

In addition to this, users will be able to take advantage of ConnectIQ compatibility, which will allow them to download downloadable watch faces, data fields, widgets, and apps and execute real-time settings syncs with the Garmin Connect mobile app. When it was initially released, this functionality was included in the Fenix 7 series.

The following table details the various improvements to both the hardware and software that come standard with the second version of the Instinct.

It should come as no surprise that the Garmin Instinct 2 is now a sports and fitness watch that possesses a much-expanded set of capabilities. It has significantly narrowed the gap between itself and the Fenix range. But you should be aware of a few significant distinctions between the two.

Comparatively, the cheapest Fenix 7 you can buy is approximately twice as expensive as the Instinct 2, which starts at around $350. As a result, it should not come as a surprise that the first version lacks certain functionalities. For the time being, however, we will merely provide a summary and may write a more in-depth piece on the distinctions at some point in the future.

To begin, the build quality of Instinct 2 is not as premium as it was on its predecessor. The Fenix watch is more durable than the other watch because it has a bezel made of stainless steel and a lens made of Corning Gorilla Glass DX. The display has a higher resolution than that of the Instinct 2 and the capabilities of being touch-enabled and colored. In addition, the Fenix offers support for Wi-Fi connectivity, offline storage for music (16GB as opposed to 32MB), downloaded maps, a gyroscope, and it has significantly greater memory.

Garmin’s most high-end watch comes with a few more goodies in terms of its software. The new Stamina metric, Training Load Focus, Up Ahead, Live Segments, Pace Pro, and a slew of other sports profiles, golfing capabilities, and swimming functionality are all included in this update.

The significantly reduced cost of the Instinct 2 is one of the things that works in its favor. And let’s not overlook the fact that its battery life is significantly longer.

After it has been almost three years since the first release of the Instinct, you may be thinking if it is worthwhile to switch to a newer model if you are still using the one you purchased originally. You do get a lot that is all new, and as a result, we anticipate that many owners of the first generation will want to upgrade to the new edition.

It has a higher high-resolution display, improved sensors, longer battery life, more memory, upgraded sensors, lots of performance metrics, NFC, and other features, and its nice enhancements that come in the shape of a slimmer body. The examples are endless. Because of these enhancements, it is now a fitness and sports device that is far more capable overall.

Buying a watch from the most recent generation is the obvious choice if you are in the market for a new Smartwatches. Garmin’s website offers the non-solar model for sale at a price of $349, and customers may also purchase it through Amazon (check price). When taking into account the features, the cost appears to be acceptable. The original model, which is currently in its first generation, can be purchased for the low price of $189; therefore, individuals on a tight budget may find it to be an appealing option while supplies last.