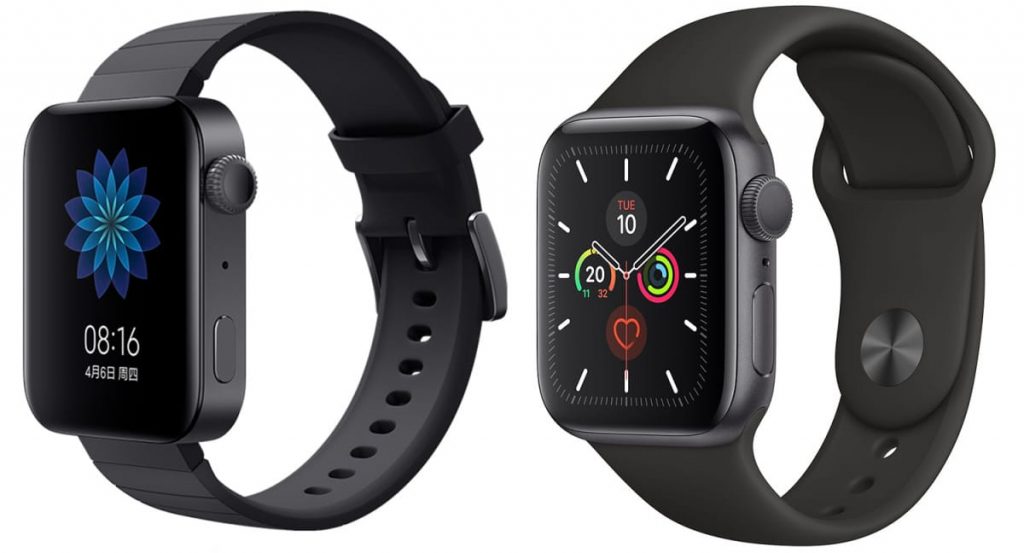 Xiaomi made its debut in the market for smartwatches yesterday by releasing a product that looks quite similar to the Apple Watch but costs approximately half as much. Not only do the two look almost exactly the same, but they also have comparable technical specifications behind the hood.

The Mi Band series, which is produced by the Chinese multinational technology corporation, is one of the most successful and widely used activity tracker product lines in the world. It will be fascinating to observe whether or not it is able to achieve the same level of success as the Mi Watch.

The timepiece will initially be offered for sale in only one country: China. On the other hand, you can expect that it will be over the border in no more than a short period of time. Continue reading to learn more about the similarities and differences between the Apple Watch Series 5 and the Xiaomi Mi Band while you wait.

It would be accurate to state that the Apple Watch and the Xiaomi Mi Watch have more than a superficial similarity with one another. When one considers the fact that the Apple Watch has been available for purchase for a number of years, it is not difficult to deduce who was responsible for the idea. It is sometimes claimed that imitation is the sincerest form of flattery; therefore, the Cupertino organisation may find some solace in the adage.

Both the Apple Watch and the Xiaomi Mi Watch have a design that is roughly square, with colours that are coordinated similarly and a ceramic back. Apple’s product can be purchased in either a 44mm or a 40mm case, depending on the user’s preference. There is only one case size available for purchasing, which measures 44 millimetres.

When we look at the two different 44mm case options, we find that the dimensions are almost exactly the same and that both come with a screen that has a measurement of 1.78 inches. However, the Xiaomi Mi Watch is much chunkier, which is most likely because of the larger 570 mAh battery it contains. This also contributes to it being a little bit heavier.

Both of these devices have the same screen resolution, which is 326 pixels per inch. However, the display type is slightly different, with the Apple Watch having an LTPO OLED Retina display and the Xiaomi Mi Watch sporting an AMOLED. This indicates that the display on the Apple Watch is marginally superior, although maintaining the same resolution.

A further point of comparison is the total number of actual buttons. To access the menus on any device, you’ll need to use the rotating crown, the touch screen, and the single button that serves multiple purposes. The dimensions of the buttons and the position of the crown are virtually indistinguishable from one another, as is everything else.

Both the Apple Watch and the Xiaomi Mi Watch are packed to the gills with various sensors. This is to be expected. They all use the same accelerometer, compass, and altimeter. The optical heart rate sensor is shared amongst them. In addition, there is GPS, which allows for more in-depth tracking of your activities outside. The Apple Watch goes a step further by incorporating an electrical heart rate sensor that can record electrocardiograms for the wearer. A SpO2 sensor that can measure blood oxygen is one of Xiaomi’s optional extras.

In conclusion, cellular connectivity, a microphone, and a speaker are included on both of these devices, in addition to the other components mentioned. However, the Apple Watch is equipped with 32 gigabytes of storage space as opposed to only 8 gigabytes.

Everything on the Series 5 is powered by a system integrated circuit (SIP) of the fifth generation termed S5. It is essentially the same as the one that can be found in Series 4 but provides performance that is twice as quick as that of Series 3. The Xiaomi watch is equipped with Qualcomm’s Snapdragon Wear 3100, which has four cores based on the A7 architecture. According to the manufacturer, this is the first smartwatch equipped with Snapdragon 3100 4G. These two processors are at the very top of their class.

Unfortunately, the Cupertino company still has a ways to go before it can compete with rivals in terms of battery life. The Series 5 will continue to function for approximately 18 hours between charges, just like its forerunners. Despite having comparable specifications, Xiaomi was able to improve on that. It is advertised that the watch has a battery life of approximately 36 hours, and that is with the 4G function turned on.

Both of these watches come equipped with the majority of the features necessary for an average individual to monitor their fitness around the clock. a barometer for counting floors, a step counter, and a lot of other features.

The lack of built-in sleep tracking is perhaps the most obvious absence on the Apple Watch. This functionality will not be added to Apple products until the company figures out how to extend the life of their batteries.

Monitoring your body’s response to the stresses of daily life and the environment is one of the other Firstbeat functions available on the Mi Watch. This feature is available around the clock. In addition, there is a function called Body Resources that advises you when to recover after strenuous exercise and when to continue training.

The Apple Watch has a greater number of features that are related to general health. The ECG sensor that has been authorised by the FDA is, of course, the feature that everyone is talking about. The Series 5 monitors your heart rate and can sound an alarm if it falls above or below a predetermined threshold. It also checks for an irregular heart rhythm. In addition to that, there is a function that can detect falls.

Aside from this, both watches are able to monitor a variety of sports, whether they take place on land or water. Additionally, they come equipped with GPS for more accurate tracking of activity when outdoors.

Regarding its operating system, the Xiaomi Mi Watch utilises MIUI watch, which is, in essence, a modified version of Google’s Wear OS. The watch comes pre-installed with a wide variety of different applications right out of the box. You can even view videos on it, although I wouldn’t recommend doing so because it won’t be that entertaining.

In addition to that, Xiaomi has its own app store. More than forty applications, including QQ, WeChat, and others, will be available to download on Mi Watch when it first launches. Since all of this is open to app development by third parties, we ought to have more apps very soon.

The Apple Watch utilises the Apple corporation’s in-house developed Watch OS. Native and third-party applications are available for everything imaginable, and watchOS 6 comes with a large number of newly implemented features.

Other features that are not related to fitness can be found on both the Mi Watch and the Apple Watch. These features include cellular connectivity for making calls even when you are not near your phone, local storage for music, an NFC chip for contactless payments, alerts for texts and calendar events, and more.

Both of these timepieces are competitors in the market for all-purpose watches, and both of them are high-end items. It would be accurate to state that they share an almost identical appearance. It is claimed that imitation is the sincerest form of flattery, therefore it is possible that Apple will find some solace in this saying.

The Xiaomi Mi Watch has a higher battery life (36 hours compared to 18+ hours on the Apple Watch), as well as a few health tracking extras, such as tracking of sleep and stress levels. These extras work in favour of the Xiaomi Mi Watch. Of course, let’s not overlook the cost, should we? Since the watch produced by the Chinese company can be purchased for one-half the cost of an Apple Watch, it appears to offer better value for the money.

There is a good reason why the Apple Watch is the smartwatch model that has sold the most units worldwide. It utilises a tried-and-true operating system that has been shown to be effective. There are more build options, extra health capabilities (ECG, low/high heart rate alarms, fall alerts, and more), and other improvements as compared to the Xiaomi Mi Watch. Unfortunately, the lifespan of the battery continues to be a problem.

We can only hope that the Xiaomi Mi Watch will be available outside of China in the not-too-distant future. For the time being, we will keep a close eye on how the watch operates and will investigate the possibility of conducting a hands-on assessment. It is extremely comparable to the Apple Watch in terms of its specifications, but only time will tell if it performs equally as well.