Which budget-friendly fitness tracker is better, the Xiaomi Mi Band 6 or the Amazfit Band 5? 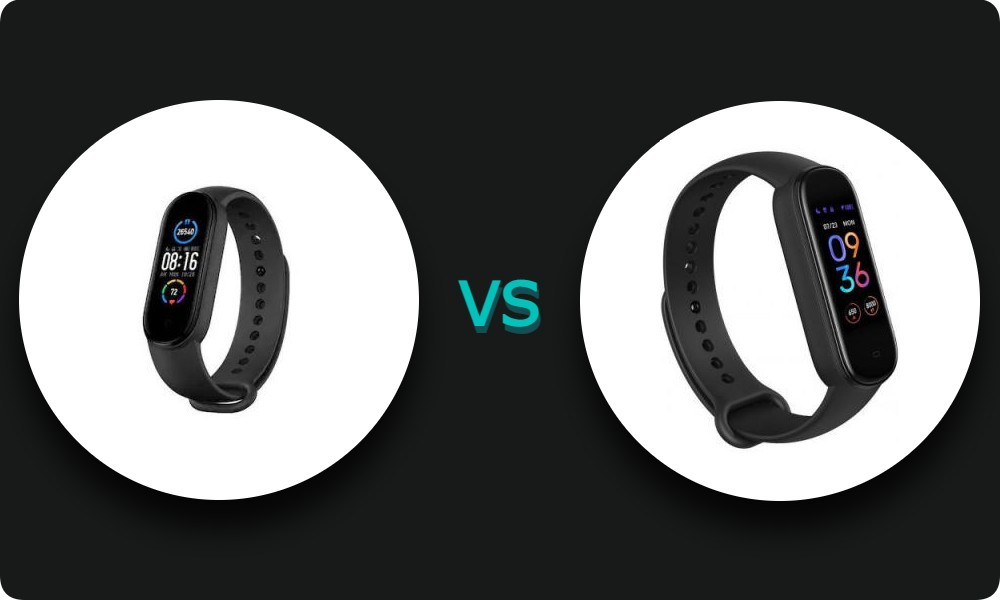 Comparison of the Xiaomi Mi Band 6 vs. the Amazfit Band 5

Comparing the Features of the Xiaomi Mi Band 6 vs. the Amazfit Band 5

The Xiaomi Mi Band 6 is the newest iteration of one of the fitness trackers that are currently among the most popular globally. It has recently been introduced to the public and is now for sale in every region worldwide.

On the other hand, the Amazfit Band 5 has been around for nearly a year. Even though it bears the number 5, this product does not belong to the fifth generation. Instead, it’s an updated model of Xiaomi’s previous band, the Mi Band 5. Huami, the company that makes Amazfit products, also makes Xiaomi Mi Bands, in case you were wondering how the two brands are connected.

These two products are among the most common and widely used affordable fitness trackers. Nevertheless, you need to be aware of a few significant distinctions between the two. Continue reading to learn more about precisely what it is that they are.

When compared side by side, it is obvious that the Xiaomi Mi Band 6 and the Amazfit Band 5 are extremely similar to one another. The display is the most obvious point of differentiation.

The screen on the Xiaomi product measures 1.56 inches and is almost completely edge-to-edge. The company has made significant progress toward eliminating the bezel on the side of the device. The maximum brightness of this AMOLED device is 450 nits, making it an outstanding choice. This is an acceptable level of quality for a fitness band, but if you are outside in the sunlight, it may be difficult to read the display. The resolution of this device is 152 pixels by 486 pixels.

The display on the previous generation is just 1.1 inches and has a resolution of 126 by 294 pixels. This is the one that is also featured on the Amazfit Band 5 (if you have one of those).

Because of its huge display, the Mi Band 6 does not come with a physical button like its predecessor, the Mi Band 5. One that is round and can be located underneath the display on the Amazfit Band 5 may be accessed here. You are able to halt workouts and get assistance navigating the options thanks to this feature, which is really beneficial. You will be required to rely solely on the touchscreen for that function when using the Xiaomi.

Comparison of the Xiaomi Mi Band 6 vs. the Amazfit Band 5

One further distinction is that the Amazfit Band features a band adjustment strap that is of a somewhat different size. Last but not least, the Huami product is a minuscule amount smaller. However, it is highly unlikely that you will detect this difference.

Aside from that, the two are extremely similar to one another. Both have a water-resistance rating of 5 ATM, which is extremely high.

The inner workings of each watch are identical, including the three-axis accelerometer, gyroscope, and optical heart rate sensor. The Huami BIO Tracker 2 PPG Bio Tracking optical sensor, which is included with the Amazfit Band 5, has the ability to monitor blood oxygen levels in addition to the wearer’s heart rate. This feature is now available on products of the sixth generation made by Xiaomi. So there is no difference in that regard.

The lifespan of the battery is almost identical. Both of these electronic devices can operate on a single charge for around two weeks and even longer if the power-saving features are enabled. That aspect of the Xiaomi product has always been one of its strongest selling points.

Comparing the Features of the Xiaomi Mi Band 6 vs. the Amazfit Band 5

Both the Xiaomi Mi Band 6 and the Amazfit Band 5 provide a comparable experience when it comes to tracking your fitness. Both of them will monitor your activity and heart rate as well as your different stages of sleep (deep sleep, light sleep, REM rapid eye movement, and sporadic naps). Additionally, they will provide stress monitoring, breathing training, PAI vitality index assessment, sedentary reminder, and other features. Tracking the health of females and measuring blood oxygen levels are also included.

No matter which option you go with, you will have access to a reasonable, cost-effective alternative for monitoring activity around the clock. The pair do not have a barometer for counting floors or an integrated GPS system. You could, however, use Connected GPS in its place to keep track of your runs outside. It simply indicates that you should bring your smartphone with you whenever you engage in physical activity. This also contributes to the overall cost reduction.

In terms of monitoring one’s physical activity, the sole distinction is that the Xiaomi offers a greater variety of sports modes. There are a total of 30, of which only six can be automatically tracked down. Even though it only features 11 sports modes, the Amazfit should be sufficient for the vast majority of users. According to the findings of our analysis of the product, all of these functions satisfactorily.

It is important to point out that the Amazfit Band 5 comes with one additional feature, but this feature is not related to monitoring your health and fitness in any way. It has something to do with being compatible with Amazon Alexa. Amazfit allows you to interact with Alexa in a variety of ways, including asking questions, receiving translations, controlling smart home devices, checking the weather, and setting alarms.

The Amazfit and the Xiaomi both offer additional smart features in their respective products. This includes shooting pictures remotely, controlling music, locating your phone, setting reminders, checking the clock, a countdown, and even the weather. Neither of these trackers supports NFC, so if you don’t live in China, you won’t be able to make payments while you’re on the move.

Both the Xiaomi Mi Band 6 and the Amazfit Band 5 are virtually indistinguishable from one another. The design is where most of the distinctions lie. The display on the Xiaomi smartwatch is larger and more brightly lit, but it does not have the actual button that is present on the Amazfit.

The sensors are the same once you get behind the hood. The battery life, resistance to water, and the majority of the other features are likewise identical.

When it comes to functionality, the Xiaomi Mi Band 6 provides you with a greater variety of sports modes than its predecessor. The connectivity with Amazon Alexa is one of the new features available with the Amazfit Band 5.

The Xiaomi Mi Band 6 has just very recently become available for purchase on a global scale. After only a few short weeks on the market, the product has already reached the one million mark in terms of total sales around the world. The primary reason for the relatively high price premium over the Amazfit is the larger display on this model. Even though it’s been on the market for more than a year, the Amazfit Band 5 is still a good choice for shoppers seeking a fitness tracker on a budget.