Which fitness tracker should you choose between Fitbit and Xiaomi? 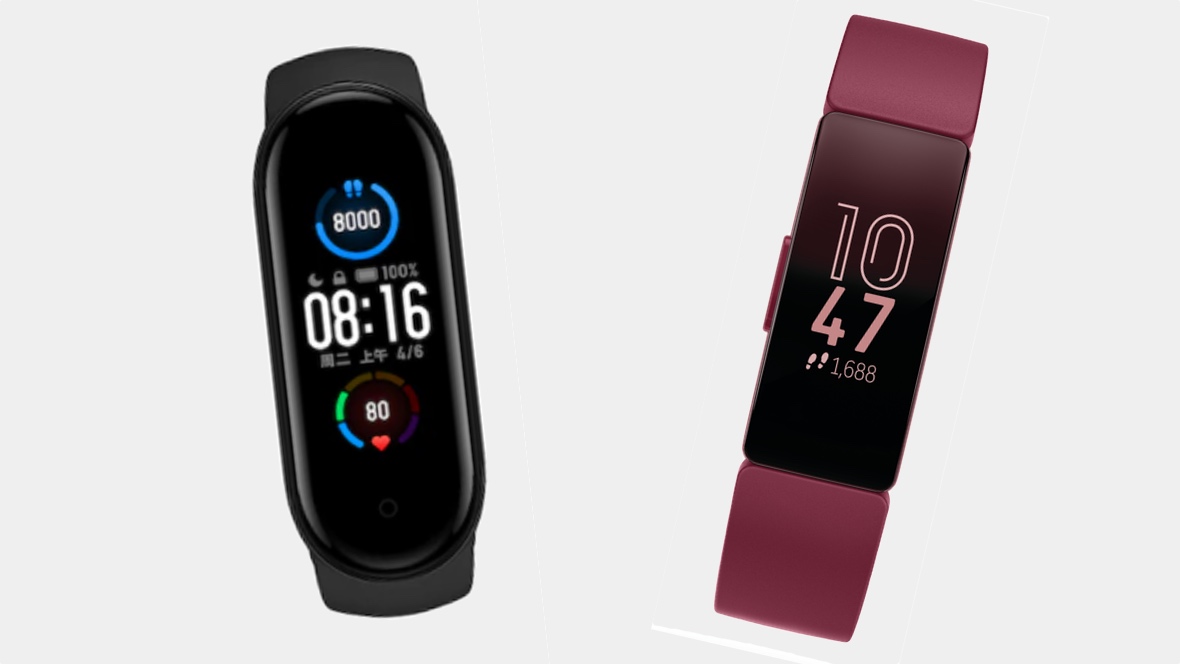 How Do the Prices of Fitbit And Xiaomi Trackers Compare?

When It Comes To Comfort, Are Xiaomi Trackers Better Than Fitbits?

Who Offers the Best Fitness Tracking? Fitbit or Xiaomi?

Is the Fitbit App better than the Xiaomi App?

What can the Fitbit Charge 5 do that the Xiaomi Mi Smart Band 6 can’t?

What can the Xiaomi Mi Smart Band 6 do that the Fitbit Charge 5 can’t?

Which is the best?

Fitness trackers have become synonymous with fitness in recent years, and the fitness tracker market is flooded with gadgets that all claim to do all you need. Many of these trackers are Fitbit and Xiaomi, two tech companies that have sold millions of devices during the last five years. Both businesses have a significant presence in the smartwatch market, but they use distinct approaches. Xiaomi’s new Mi Band 6 is one of the most popular upcoming versions. The Fitbit Charge 5 is the company’s most recent model.

Many of us look first at pricing when shopping for a fitness tracker in order to narrow down our options to what we can actually afford. The brand, battery life, comfort levels, and tracking capabilities are then considered. If you’re in this situation and can’t decide between a Xiaomi and a Fitbit, have a look at our guide below.

How Do the Prices of Fitbit And Xiaomi Trackers Compare?

When it comes to pricing, Xiaomi outperforms Fitbit by a wide margin, and you should expect to pay at least twice as much for a Fitbit gadget as you would for a Xiaomi. The Xiaomi has fewer parts and fewer functions, and while a low price can be appealing, Xiaomi gadgets are not known to last as long as their Fitbit competitors. Fitbit trackers are more expensive than Xiaomi trackers, yet they are still within the fitness tracker budget. This means you can acquire one for a reasonable price and not have to worry about it becoming destroyed while in use.

The software for fall detection and incident detection is quickly becoming one of the most popular smartwatch functionalities. These detecting tools can determine if the user has fallen and can instantly alert the authorities’ emergency contacts if necessary. This popular programme provides peace of mind to hikers and senior citizens, but it has yet to be integrated into fitness tracker devices. While both of these fitness trackers are designed for health and fitness, neither of them has these advanced safety features. Many consumers who trust these brands may be disappointed, but if you can overlook the incident detection features, these two companies are still among the top smartwatch sellers on the market. There are some third-party apps for Fitbit devices that incorporate event detection and emergency contact software; however, they aren’t compatible with Xiaomi trackers and are only available on the Fitbit Versa and Fitbit Ionic first generations.

If the software is a deal-breaker for you, Apple and Garmin devices may be a better option. Fitbit is said to be planning to include this functionality in its 2022 launches, but nothing has been confirmed by the business. Keep an eye on the latest smartwatch news to see if these companies release devices with advanced incident detection capabilities!

Having a tracker with a lengthy battery life makes life so much easier, and sleep trackers can be beneficial if the tracker lasts long enough. Both firms claim to have devices that can go for a week without needing to be charged, but the Xiaomi’s battery life was significantly less consistent than the Fitbit’s. In fact, some Fitbits on the market have a battery life of more than a week and can be charged in under an hour, so you won’t be without your tracker for long. Keep an eye on the latest smartwatch news to see if these companies release devices with advanced incident detection capabilities!

When It Comes To Comfort, Are Xiaomi Trackers Better Than Fitbits?

In a nutshell, no. Fitbits come in a variety of shapes and sizes to accommodate the wearer. Fitbit also allows you to change your strap to match your personality or dress, and it’s really simple to do so. When you put the Fitbit on, you’ll notice how comfortable and light it is, making it a wonderful choice for someone who wants to wear it all the time. Xiaomi, on the other hand, has genuinely comfortable bands that you can replace around with a variety of color options, even if they don’t have the same range and sizes as Fitbit. Mi devices are very light, so you’ll forget you’re wearing them even if you’ve had them on all day.

Who Offers the Best Fitness Tracking? Fitbit or Xiaomi?

When it comes to fitness trackers, we all want one that has a variety of tracking features as well as data from our workouts that we can use to evaluate our performance. Simply put, the Xiaomi is neither as advanced nor as trustworthy as the Fitbit devices now on the market. Both gadgets allow you to track your steps, although Fitbit’s step count is more liberal than Xiaomi’s. While they both track a variety of activities, we found that the Fitbit has a larger list of in-built sports and provides more feedback on your performance.

The Xiaomi is not a bad fitness tracker, but it lacks the sophistication of the Fitbit line, which is reflected in the pricing. If you’re a newbie looking for a simple monitoring system, the Xiaomi may suffice, but if you want more information, a Fitbit is the way to go.

Is the Fitbit App better than the Xiaomi App?

When it comes to finding an app that works with your device, you’ll notice that the Xiaomi app is similar to their products in that it’s simple to use and has limited functionality. Unfortunately, the software is slow to use and does not simply sync to your smartphone, so you will have to devote some time to updating your performance. It does, however, allow you to track your progress, reward you with winning streaks when you reach your goals, and share your triumphs with friends via social media. The sleep tracking feature is perhaps the best aspect of the app. The Fitbit app is significantly more comprehensive, allowing you to dig deeper into your numbers and track your progress over time. It’s also a social network of other Fitbit users, allowing you to compete electronically and track your Fitbit friends’ progress.

The Mi Band 6, Xiaomi’s latest flagship fitness tracker, has recently joined the field of low-cost fitness trackers. The Fitbit Charge 5 is the Mi Band 6’s most formidable foe. Xiaomi’s Mi Band 6 now includes a few premium features that elevate it to the top of the fitness tracker market. The Charge 5, on the other hand, is a popular seller because of its fitness tracking capabilities.

What can the Fitbit Charge 5 do that the Xiaomi Mi Smart Band 6 can’t?

What can the Xiaomi Mi Smart Band 6 do that the Fitbit Charge 5 can’t?

The Fitbit Sense is a striking wristwatch that seems tailor-made for these tough times, emphasizing mental wellness as much as physical activity monitoring. There is room for improvement on the software side, but if you’re interested in practicing mindfulness and taking little steps toward a healthier lifestyle, the Sense could be the tool for you.

The Fitbit Versa 3 is a fantastic wearable with built-in GPS and a new design. It is, however, more of a fitness tracker than a timepiece, with only a few productivity functions, like its predecessor. Despite its modest cost, you get a decent display, a long battery life, and a lot of fitness data, making it a viable Apple Watch rival. Given that this is the third iteration of Fitbit’s popular Versa series, it’s a little disappointing that the firm continues to miss the mark in some areas.

The Xiaomi Mi Watch Lite demonstrates that a good smartwatch does not have to be expensive. The clear 1.4-inch LCD display is the first thing you’ll notice, and it seems more expensive than its price tag. It’s immediately noticeable as being large, clear, and appealing. It appears to be a little less pricey in my hands-on experience with the Xiaomi Mi Watch Lite. It has a plastic watch band that can’t be laid flat on the ground and isn’t very comfortable. However, when you interact with the screen, it appears to be more sophisticated than you may expect.

Which is the best?

Overall, if you’re looking for a fitness tracker with the best possible features for capturing health data, as well as being comfortable, simple to use (no buttons), and easy to see outdoors in the sun — all at a reasonable price — Fitbit’s Charge 5 comes out on top. In fact, the Charge 5 recently received CNET’s Editors’ Choice Award. The Charge 5 uses an EKG reading app to track your heart rate, an electrodermal activity sensor to track your stress level, and a skin temperature sensor to track your blood oxygen level and skin temperature. It also monitors your sleeping behaviors, including breathing rates, sleep stages, and restlessness.

The Charge 5 monitors over 20 different physical activities, including swimming, yoga, and cycling (it’s waterproof). It also includes a built-in GPS, which is great for runners. Both iPhones and Android phones are compatible with the Charge 5. Customers who have an iPhone can only see alerts on the Charge 5 screen, but Android users may reply swiftly.

In conclusion, when it comes to purchasing a luxury item such as a fitness tracker, the majority of us will be led by price, which is understandable. However, it may be more beneficial in the long run if you save up and purchase the best product on the market rather than a cheaper version that will need to be replaced sooner. The Xiaomi fitness trackers are the most affordable, but you’ll have to deal with a slew of hassles with setup and syncing in order to acquire a starter gadget with limited monitoring capabilities.

Fitbit’s popularity has skyrocketed in recent years, and its new ability to integrate with Alexa makes it a much more appealing fitness tracker than ever before. If you want to get your hands on a device as quickly as possible, we recommend sticking with Fitbit. It’s a well-known brand with good customer service that makes great fitness trackers.