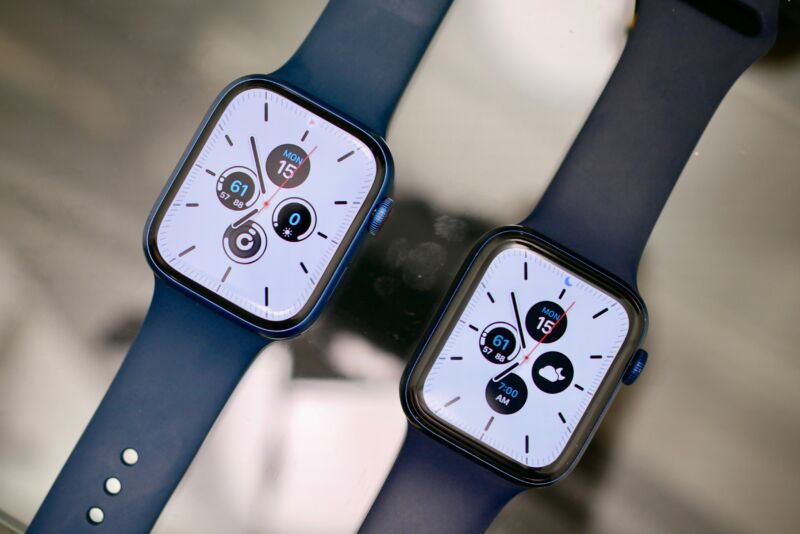 Which is better for me, the Fitbit Charge 3 or the Apple Watch Series 4?

The Fitbit Charge 3 and the Apple Watch Series 4 are very distinct gadgets. The other is a fitness band, while the last is a full-featured smartwatch. Furthermore, despite the current trend toward smartwatches, fitness bands are not going anywhere any time soon.

The Apple Watch is getting closer to becoming your essential health guardian with each new edition. A larger display, a slew of additional health and fitness features, performance improvements, and more are included in Series 4.

Which of the two fitness wearables should you choose if you’re in the market for one? Keep reading for a comparison of their attributes.

The Fitbit Charge 3 resembles a sleeker, more contemporary version of its predecessor. However, it is clear that the wearable is a Fitbit. Over the years, the company hasn’t deviated all that much from its distinctive appearance.

Compared to the Charge 2, the fitness band is constructed of lighter materials, including an aerospace-grade aluminum case and a Corning Gorilla Glass 3 display. You won’t even notice it on your wrist because it is only 30 grams in weight and measures 18.3 mm in width and 11.8 mm in depth.

An inductive button has replaced the solitary physical button on the right side. The display is significantly better suited for swiftly scanning your stats because it has been enlarged by around 40% from the previous iteration. Additionally, touch now has full responsiveness.

Depending on the size of your wrist, Charge 3’s two included bands can be switched out. You can shop around and choose a band that suits your own style because bands are interchangeable.

Which is better for me, the Fitbit Charge 3 or the Apple Watch Series 4?

Compared to Fitbit wearable, the Apple Watch appears significantly different. That’s because it’s a full-featured smartwatch, not a fitness band.

The gadget has an edge-to-edge screen with cutting-edge LTPO display technology, which increases power efficiency. The device’s physical dimensions remain unchanged, but the screen area is 30% bigger on the 40mm and 44mm versions. Additionally, the new watch is a little bit thinner than the old one.

All models of the gadget have a black ceramic and sapphire crystal back. Apple claims that since radio waves may now go through the front and back, cellular reception has improved.

A significant distinction between Fitbit and Apple’s products, aside from general proportions, is the screen. You will have far more screen space on the Apple Watch than on the iPhone, even though they are both turned off by default.

The Charge 3 has an OLED display that is 696 square millimeters in size. As previously reported, the 44mm and 40mm sizes of the Apple Watch are available. The larger one features a 977 sq mm screen (368 x 448 pixels), while the smaller one has an OLED Retina display area of 759 sq mm.

In terms of aesthetics and design, we would rank the Apple Watch 4 higher than the Charge 3. However, the Fitbit tracker is attractive and represents an acceptable advancement over the model it replaces.

There are a few significant differences to be aware of under the hood. Both trackers have an optical heart rate monitor, a 3-axis accelerometer, gyroscope, altimeter, vibration motor, and an ambient light sensor as features that both trackers have in common. Fitbit refers to the relative SpO2 sensor included with Charge 3 as another feature. Fitbit uses this to gauge blood oxygen levels, and Fitbit intends to use it to detect sleep apnea in the future.

The Series 4 from Apple, on the other hand, has GPS built in. For people who often run or cycle, this function is crucial because it enables phone-free exercise. The Charge 3 only supports linked GPS, so if you want to use GPS readings, your phone must be nearby.

The ECG sensor is the other significant distinction. It will be able to tell you if your heart rhythm is normal or if there are problems when it is enabled later this year (in the US first than in other countries). The Cupertino company has improved its gyroscope and accelerometer so that they can now sample motion data 8 times faster. This makes it possible for cool features like fall detection.

The Apple Watch also has cellular connectivity, which is the last factor. A tiny electronic SIM card is a feature of Series 4. But there are ongoing monthly costs associated with this.

According to Apple’s technological standards, the watch may last one to two days between charges. In particular, GPS will deplete the battery. Therefore, you will regrettably need to charge the watch every night. This still presents a challenge.

In this regard, Fitbit is in the lead. Approximately 7 days’ worth of battery life is provided with Charge 3. Compared to the opposition and its predecessor, this is fairly respectable and promising.

But both wearables will function properly in terms of water resistance. With a great 5 ATM water resistance rating, the Charge 3 and Series 4 may be submerged up to 50 meters deep. They’ll keep tabs on your activities in the pool as well as produce pertinent statistics.

The necessary features are present on both devices for fitness tracking. This includes tracking of steps, distance traveled, floors climbed, active minutes, and calories burned, along with 24/7 heart rate monitoring (containing information on current, resting, and heart rate zones). Additionally, there are move reminders, automatic activity recognition, and some more sophisticated performance metrics like VO2 Max.

Two fitness apps are available for the Apple Watch: Activity, which measures your daily activities; and Workout, which records your running, cycling, and walking sessions. You can keep track of your fitness and other health-related information in one place by having all of this information periodically synced to the Health app.

The Fitbit app is excellent and simple to use. The good news, however, ends there because the software cannot connect to Apple Health. Unless you choose integration through a third-party app, no.

Sleep tracking is Fitbit’s most evident advantage against Apple. The Apple Watch Series 4 lacks it, although the Fitbit Charge 3 does. except if you choose a third-party app. However, even if you do, tracking your sleep may be challenging due to how frequently you’ll need to recharge the device. And there is another benefit of the Fitbit product. Fitness tracking is significantly simpler because of the device’s full week of operation between batteries.

Let’s not forget the blood oxygen sensor that was discussed earlier. It will soon be possible for you to utilize it to monitor your nighttime oxygen saturation levels, giving you further insight into the quality of your sleep.

The company’s female health tracking function is the last one. This enables women to observe how their periods affect all facets of their lives, including everything from activity levels to sleep. Fitbit should be commended for breaking new territory because this is something we have never seen before.

Additionally, the Apple Watch has several hidden abilities. Instead of fitness tracking, the majority of these have to do with health.

The FDA-cleared ECG sensor is the most intriguing of all. Place your finger against the digital crown to take a reading. With the sensor on the back, this makes a closed circuit. The new ECG app will provide you with a detailed report that will indicate whether your heart rhythm is normal or if there are any problems.

Based on your wrist trajectory and impact acceleration, Series 4 can pinpoint a variety of different ways to trip or fall. In turn, a few options for dialing an emergency number and informing your loved ones of your whereabouts are activated.

Apple’s optical heart rate monitor checks for abnormal heart rhythms as part of keeping an eye on your heart. Additionally, the FDA has given its approval for this feature. Additionally, the device will send you low or high heart rate notifications to let you know if it thinks something is amiss with your ticker.

Finally, Series 4 also includes an integrated GPS. Many runners and cyclists will welcome being able to exercise without their phones thanks to this.

The Charge 3 is a fitness band, but it also has a few intelligent functions. Some even go so far as to call it a smartwatch that’s been passed off as a fitness tracker, though we believe that’s pushing it.

For Android users, the wearable offers a response function for texts and a call acceptance/rejection button. Additionally, it is offered in a Special Edition version that costs a little bit extra and features an NFC chip for contactless payments. Although the list is currently not very big, you can still install programmes.

It is unnecessary to mention that the Series 4 is far superior to earlier models in terms of smartwatch functionality. It is actually an extension of your iPhone because of how much it resembles it. An abundance of native and third-party apps, on-board music storage, and the upgrade to watchOS5 are all included.

Not to mention cell phone connectivity. The watch automatically changes to the cellular signal when you are not near your phone. This signal will also be accessible to third-party apps.

Which one of the two should you choose, then? What you are looking for actually does matter. The Fitbit Charge 3 and the Apple Watch Series 4 are very distinct gadgets. The other is a fitness band, while the last is a full-featured smartwatch.

There is no innovative new technology built into the Charge 3 that sets it apart from other Fitbits. Fitbit is concentrating on what it does well and enhancing it rather than adding a tonne of new features. The absence of an integrated GPS system is a drawback. However, unless you are an avid biker or runner, this generally won’t matter all that much to you.

When it comes to tracking for health issues, Apple is now in the lead. The Series 4 monitors for trips and falls, delivers low and high heart rate alarms, checks for unusual heart rhythms, and has ECG functions. And it has FDA approval for doing the majority of these things.

However, the Charge 3 is the clear choice if all you’re looking for is a fitness wearable. It handles all the essentials, including sleep monitoring, and is roughly twice as affordable as the Series 4. It also benefits from having a lengthy battery life.

On the other hand, Apple’s gadget offers a tonne of other features in addition to being a fitness tracker. By far, the best all-arounder is the watch. Some people can also be affected by the integrated GPS and on-board audio storage.

Therefore, it actually depends on your preferences. Do you want a fitness band that has the majority of the features you’ll need for activity tracking, or would you prefer something more substantial, pricey, and feature-rich?