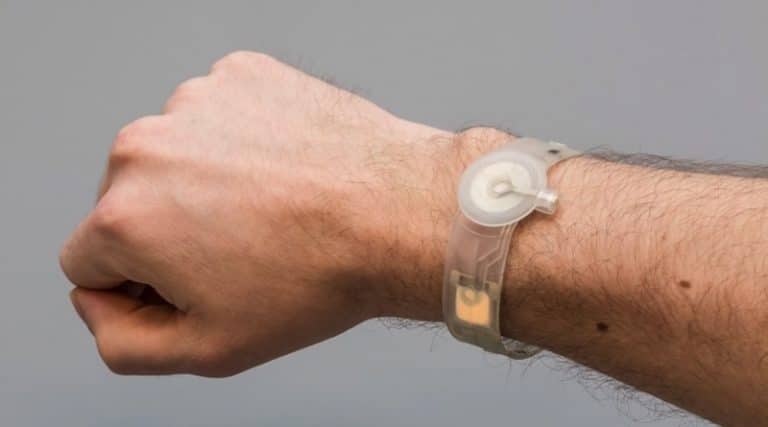 Through the use of light therapy, a brand-new OLED wristband has been designed with the intention of assisting in the healing of wounds and treating depression. The wearable was developed by three separate research teams, one of which was led by the Fraunhofer FEP in Germany. At the Wearables Europe 2018 event, which took place in Berlin at the beginning of April 2018, attendees were able to see a demonstration of the cutting-edge gadget.

One of the very first wearable items to feature flexible organic devices, the gadget is the result of a collaborative effort amongst European researchers known as PI-SCALE. European companies will be able to use this pilot line to test and improve their flexible OLED lighting solutions.

The bracelet is able to perform its function because it emits light at particular wavelengths. The researchers believe that the beneficial impact of the red and yellow OLEDs can assist in counteracting the negative effects of depression if the OLEDs are worn on the head. When tuned to the appropriate frequency, the wristband can also facilitate recovery in the recipient’s arms or legs.

Anode depositing on barrier web was a project that was worked on at the Fraunhofer Institute for Organic Electronics, Electron Beam and Plasma Technology or FEP for short. The evaporating technologies that were used to generate the OLED deposition were pioneered by the Holst Center in Holland. In the end, the VTT Technical Research Center in Finland incorporated the innovation into a wristband and set up a power source. The lightweight and compact OLED bracelet that was created as a result of these combined efforts may be seen above.

Markus Tuomikoski of VTT explained that injection moulded architectural technology was utilized in the process of integrating the OLED.

“The idea and execution of a small power distribution system were required in order to fulfil the requirements of a wristband. Because of how well the partners worked together, we were able to put both flexible electronics and a flexible OLED into our plastic-moulded wristband without any problems.”

The bracelet will soon have a version that is ready to be sold on the market, as that is the plan. If the idea of light treatment doesn’t appeal to you, you can use the gadget in other ways, such as as a piece of fashionable clothing or as a safety device for people who work outside at night.

OLEDs have deeply maintained the goal of bringing an entirely new universe of large-area, clear, flexible, and low-energy lights. This promise has been cherished for a very long time. The OLED bracelet was one of the first things to show that this kind of technology could be used not just for lighting but also for health and Fitness.