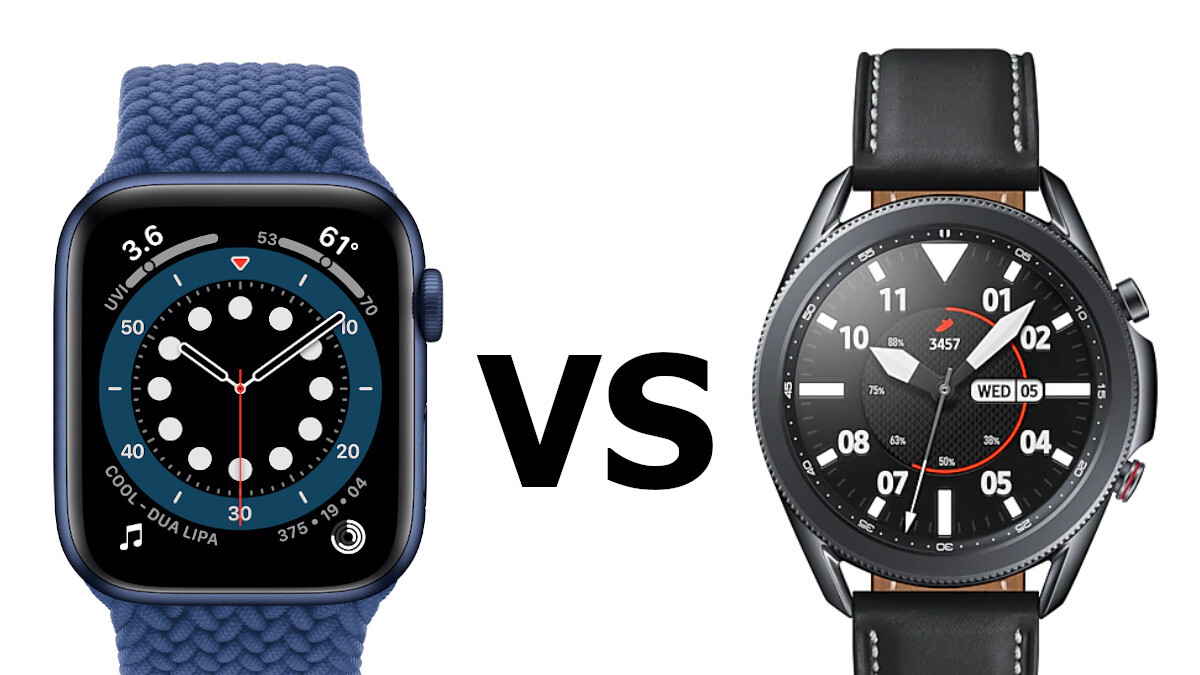 A comparison of the operating system, the processor, and the battery

So, which one is the better option? Which device is better: the Apple Watch 6 or the Samsung Galaxy 3?

The most noteworthy smartwatches that were released in the year 2020 were the Apple Watch 6 and the Samsung Galaxy Watch 3.

These are the most advanced Smartwatches available from two of the most well-known names in the consumer electronics industry. They are loaded with the most advanced fitness metrics and functions, which were critical during the epidemic.

Both begin at a price that is comparable to one another – in particular, the beginning price in the United States is exactly the same – which means that there is no price disparity to discuss. So, which one are you going to choose then?

Let’s take a look at the differences and similarities between the Apple Watch 6 and the Samsung Galaxy Watch 3.

Since Apple was so successful with the first iteration of the Apple Watch concept, the company hasn’t seen the need to make any significant cosmetic updates to the product since it was first introduced six years ago.

The Apple Watch 6 has a thickness of 10.4 millimeters and comes in two different sizes, 40 millimeters, and 44 millimeters.

In terms of its overall appearance, the Apple Watch 6 is virtually identical to previous models in every manner except for the colors it comes in.

The Galaxy Watch 3 stands out from the crowd. The first generation of Samsung’s product was great, but some people found it awkward and very “manly.”

The Galaxy Watch 3 makes an effort to bridge the gap between the two. Even though it is more streamlined than its predecessor, it still has an analog design and a spinning bezel. If you haven’t noticed already, both the case and the display are shaped like a circle.

It comes in either 45 or 41 millimeters, which are both slightly larger than the corresponding Apple Watch 6 size. On the other hand, at 11.1 or 11.3 millimeters in thickness, the Galaxy Watch 3 is not overly bulky compared to other analog smartwatches, which we appreciate (depending on which model you go for). The Samsung Galaxy Watch 3 is superior to almost every other circular wristwatch on the market.

Because the resolution of the OLED screens on each device is high enough, the total number of pixels is largely immaterial.

The 1.78-inch display on the Apple Watch 6 has a resolution of 448 by 368 pixels, making it identical to the ‘Retina’ quality offered by other Apple products (326 pixels per inch).

The bigger Galaxy Watch 3 has a circular screen that is 1.4 inches in diameter, has a resolution of 360 by 360 pixels, and has a pixel density of 364ppi. Both of those qualities are shared by both of them.

Apple asserts that the brightness of the iPhone 6 will approach 1000 nits, which is on par with the brightness of some of the most brilliant tablets. Although Samsung has not made any statements on the blazing OLED pixels on the Galaxy Watch 3, the watch performs exceptionally well even when exposed to bright sunlight.

Each one also comes equipped with an Always-On display feature. When the hardware and display technology are both comparable, the only thing left to go on is how something looks. Which type of display do you like better: a round analog dial or a thin rectangular one?

On the other hand, Samsung enjoys a competitive edge in one location. A Samsung Watch made of stainless steel can be purchased for the same price as an Apple Watch 6 made of aluminum, which is a material that Samsung does not sell.

When it comes to various precautionary measures, Each watch is equipped with its own unique intelligent technology that can provide assistance in an urgent case. Although the fundamental ideas are the same, the operating systems each have their own unique characteristics. Let’s look at both of them side by side and compare them.

The Apple Watch Series 6 comes with a variety of practical security measures. One of these is the detection of falls. Since the series four update, the watch has been equipped with sensors that can detect subtle alterations in motion, such as those that would indicate a fall. If it detects a fall, the watch will “tap” you on the wrist, send you an alert that you will need to respond to, and sound an alarm.

After that, you will be given the option to inform the watch that everything is fine or contact emergency authorities. If you are moving after the fall, the watch will wait for you to reply to the warning before continuing to monitor your location. If you haven’t moved for an entire minute, the watch will begin a thirty-second countdown, including more taps and an alarm that will get louder and louder as time passes.

If the user does not respond, the watch will immediately contact emergency services. After that, it notifies the people listed on your Medical ID as your emergency contacts, providing them with information about where you are and what has occurred.

There are a lot of functions that are comparable on the Samsung Galaxy3, such as fall and incident detection. It acts slightly differently, but it accomplishes the same goals. As a result of the introduction of the Galaxy4 and the subsequent update to the fall detection system for all earlier models, the Galaxy3 now uses other sensors in addition to the accelerometer to detect sudden fainting even when the user is standing still. This is because the Galaxy4 was the first model to include the updated system.

If the sensors are tripped, a warning and alarm will sound for sixty seconds, giving you time to respond. Your emergency contacts are notified that you have fallen and where you are located if you do not answer the call within the first sixty seconds after it is made.

There are many wearables on the market that seek to fulfill the roles of medical devices. And this holds true for the Apple Watch 6, the Samsung Galaxy Watch 3, and many other watches.

They incorporate GPS, an electronic heart rate monitor, a gyroscope combined with an accelerometer, and a component that acts as an altimeter. In addition, they have the ability to track legal aspects of physical activity.

A blood oxygen monitor and an electrocardiogram (ECG or EKG) sensor are among the most advanced additions. They can be found on the Apple Watch 6 and the Samsung Galaxy Watch 3.

In a word, an ECG can be thought of as a digital replacement for a traditional optical heart rate monitor. Underneath the watch is where you’ll find one of the electrodes. Another one can be accessed using either the crown on the Apple Watch 6 or the dedicated key on the Galaxy Watch 3. To finish the circuit, place your finger on one of the two sensors, and the apparatus will determine your heart rate.

Where do we want to get to? Searching for irregularities that can point to arrhythmia is something your doctor should examine.

The amount of oxygen in the blood, also known as the SpO2 level, is determined by a sensor that is situated on the abdomen of the optical heart rate monitor. LEDs that are red and infrared in color pulse through the wrist, and an optical sensor monitors the amount of light that is reflected.

For example, SpO2 and ECG sensors need to be approved by the proper authorities in each jurisdiction before using them. In the United States, the Food and Drug Administration (FDA) is in charge, whereas the European Union (EU) controls the CE emblem. Because the things available to you depend on where in the world you are located, it is good to verify twice if these are acceptable in your region.

In addition to being exceptional fitness and Fitness trackers, the Apple Watch 6 and the Samsung Galaxy Watch Series 6 from Samsung are also available.

In a manner analogous to that of Peloton, Apple Fitness Plus is a subscription-based program that allows users to perform guided video exercises on their iPhone, iPad, or Apple TV. The Apple Watch contributes to this by transmitting your movement information to the Fitness Plus interface. This gives you the ability to monitor your heart rate and the amount of effort you put in during your workout.

That is really cool. This capability is not available on the Samsung Galaxy Watch 3, although it does have the ability to transmit its own heart rate data through Bluetooth. Because of this, you can utilize the watch as a chest strap HR controller for third-party services like Zwift.

A comparison of the operating system, the processor, and the battery

Samsung can win back some of the lost points thanks to the improved battery in the Galaxy Watch 3. If you keep it on your person at all times but limit how often you use it, the battery that it contains can last for as long as three days. In any other case, you are allotted two days if you use a GPS for a few of your runs.

Apple asserts that the new Watch Series 6 has an 18-hour battery life, similar to that of previous Watch models. Even though watchOS 7 now has functionality for monitoring your sleep, you’ll still need to recharge your watch while you’re sitting still but not asleep. Check out our recommendations for extending the life of the Apple Watch’s battery. Good luck!

There is also no purpose in being concerned about the amount of processing power that these watches have. They share a few points of reference because they use various software and hardware applications.

Each one features an app store.

The Apple App Store far outclasses its competitor, the Google Play store. There are now many more applications to choose from, and their designers are putting in even more effort to ensure that they perform properly.

Considering that more people use Apple Watch than any other wristwatch, it makes sense, which means there is a greater potential customer base for Apple Watch.

The Galaxy features an interface that is powered by Tizen OS and has a rotating bezel. This interface allows you to swipe between pages of information panels and application menus.

Around $400 is the lowest price point to get one of these watches in the United States.

It goes without saying that you’ll have to shell out additional funds to increase the size of any option.

In the same vein, if you want to be free from your smartphone yet still have access to LTE capability.

In addition, Samsung has introduced a model made of titanium, although the price of this variant is almost 1.5 times that of the ordinary model.

So, which one is the better option? Which device is better: the Apple Watch 6 or the Samsung Galaxy 3?

This is a technologically advanced competition. It’s a battle between two of the biggest names in technology.

In all honesty, we are all aware of the winner. The answer is, of course, the Apple Watch. There is an almost nonexistent chance that the Galaxy Watch will outperform the Apple Watch in this regard.

Having said that, selecting Samsung is recommended for two different reasons. To begin, the battery can power the device for more than a day. We think it’s great, and while we wish it had a battery life of two weeks, it simply isn’t possible in a full-fledged smartwatch at this time.

And that’s the way the expression goes. Simply put, the look of the Apple Watch, which was previously cutting edge but is now instantly recognizable, may not appeal to everyone as much as the round, watch-like appearance of the Galaxy Watch 3.