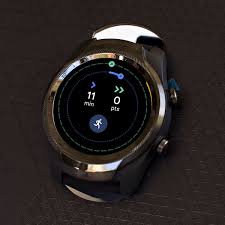 Mobvoi has announced that beginning on August 8th, customers will be able to activate cellular connectivity on their Ticwatch Pro 4G by using either the My Verizon app or the Verizon offline service shop. This functionality will be available to customers in the United States. A little over a month ago, the smartwatch was introduced to the market, but it lacked this essential function. We have been putting it through its paces for the past week and a half, so stay tuned for our comprehensive review somewhere in the next week or two.

There are hardly any watches on the market that have cellular capabilities. With the release of its newest product, Mobvoi has officially joined the club. Users of Verizon’s TicWatch Pro 4G/LTE will be able to share their existing phone number beginning on August 8, and they will also be able to make VoLTE audio calls without the use of a smartphone. This also applies to the usage of text messaging and messaging apps.

The timepiece is an improvement over its predecessor in a number of other respects as well. A good illustration of this would be the SOS alerts that utilize the cellular connectivity. In the event of an emergency, the device, much like the Apple Watch, will call 911 and relay your current position to the people you have designated in advance.

However, in terms of the one-of-a-kind design, not much has changed, which is something that should be commended. The most notable feature of the current version is that it has a layered top, which enables one-of-a-kind power-saving capabilities. This is the version’s main party trick. This is something that has been carried over to the 4G/LTE edition.

When you are not using the primary 1.39-inch AMOLED (400 x 400 pixel) display on the TicWatch Pro, a second, transparent FSTN LCD screen that sits atop the main display and turns on automatically comes into view. This helps to lengthen the life of the battery. However, the full-color screen is quick to respond at the flick of the wrist, and as a result, you are able to get a perspective that is significantly more specific of the situation.

It’s interesting to note that the clear screen is the one that’s easier to read when you’re outside in the bright sunlight. Outside, the order is reversed from what it is indoors. When compared to watches with screens that are off by default, the advent of the FSTN always-on display is a significant step up in terms of functionality.

The device has a case made of polyamide and glass fiber, an IP68 rating, and a stainless steel bezel. Its dimensions are 45.15 by 52.8 by 12.6 millimeters, and it has an aluminum back cover and a bezel made of stainless steel. Despite having more features than its predecessor, this item is 11 grams lighter than the one it replaces. The silicone band that measures 22 millimeters in width can be removed and replaced with one of several other available choices.

The sensors are essentially the same as before after you lift the hood. PPG heart rate sensors, accelerometers, gyroscopes, electronic compasses, ambient light sensors, and low latency off-body sensors are all included on the whole list. In addition to this, there is the Global Positioning System (GPS), the Glonass Satellite Navigation System (GLONASS), and the Beidou Satellite Navigation System (Beidou), all of which function as they should and make the connection rather quickly. Furthermore, there is Near Field Communication (N

Because the sensors are being utilized more effectively now, some new functionality is now possible. Mobvoi has upgraded TicMotion to version 2 with its latest update. This is capable of automatically recognizing a broad variety of workouts and logging them, including swimming.

TicPulse is another product that Mobvoi has offered to the market. Even while in “Essential Mode,” this enables the monitoring of your heart rate in a more granular fashion for up to 30 days. In addition to that, it sounds an alarm for a very rapid heart rate.

This whole thing seems to work out really well. You are given the option of utilizing the Google Fit app or the software that is exclusive to Mobvoi. The latter is the one I prefer to use because the data is presented in a more appealing manner and you have access to more specific statistics.

Because of its one-of-a-kind design, the battery life is still respectable, especially when measured against that of other Wear OS devices. The watch will continue to function normally for up to two days, but users have the ability to convert to a power saving mode known as Essential Mode, which will let the device to continue functioning for up to one month while having less features.

You may purchase a TicWatch Pro 4G/LTE from either Amazon (check price) or the website of Mobvoi for the price of $299. Mobvoi is currently offering a discount on their website of $20 for customers who act quickly enough to take advantage of it before August 8th.