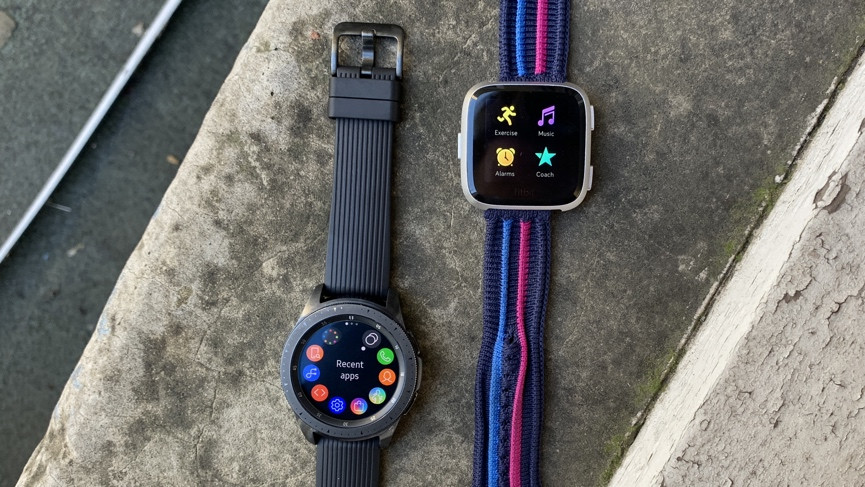 The battery life and water resistance of the Fitbit Versa vs. the Galaxy Watch Active

Fitbit is a new player in the smartwatch market, but it is already competing with established brands like Apple and Samsung. The Versa has been a bestseller since its release at the beginning of last year, helping the San Francisco company gain a 12 percent market share.

On the other hand, Samsung has been producing excellent smartwatches for a while now. The Galaxy Watch Active, which is the Gear Sport’s replacement, is its most recent effort in this area.

Both the Fitbit Versa and the Galaxy Watch Active are robust fitness-focused gadgets. Here is how they compare if you’re not sure which one to choose.

Fitbit Versa vs. Galaxy Watch Active: Design The Versa is a considerably better-looking watch than Fitbit’s initial attempt in this area, the Iconic. The gadget has sleek rounded corners and is composed of lightweight 6000 series aerospace-grade aluminum.

One on the left side and two on the right are the three actual buttons. These can be used by users, in addition to the touch-screen, to navigate the menus. You’ll get better at navigating the various screens with some experience.

The device’s real measurements are 39.36 x 37.65 x 11.2mm. It is available in a variety of hues, such as black (with a black band), rose gold (with a peach band), and silver (with a gray band). Because the straps are interchangeable, you can tailor everything to your mood and the occasion.

It is lighter than the Fitbit because it weighs only 25 grams (38 grams). The Samsung watch weighs the same as one strawberry, according to a corporate spokeswoman!

Silver, Black, Green, and Rose Gold are the four colors that Watch Active is offered in. The recognisable bezel is no longer present, so users must use the touchscreen and two physical buttons on the right to get around.

The screens on both watches are of high quality. The Versa has a 1.34-inch LCD touchscreen with a 300 x 300 pixel resolution. Samsung has a stunning 360 x 360 pixel Super AMOLED display that measures 1.1 inches. When you tap on the screen, click a button, or raise your wrist, Versa’s screen turns on by default. On the other hand, Watch Active supports displays that are always on.

Neither of these devices falls short in terms of design. Watch Active, with its round form, is the logical choice if you’re seeking a Smartwatche with a more classic appearance. The Versa does have a slightly larger screen, which makes it a little bit easier to read everything.

The smartwatches’ internal components include an altimeter/barometer, a 3-axis gyroscope, an optical heart rate monitor, a 3-axis accelerometer, and an ambient light sensor. Additionally, they have NFC for contactless payments and on-board music storage.

The presence of integrated GPS in Watch Active is a significant distinction. Only connected GPS is available on the Versa, which means it relies on your smartphone for signals. This distinction might be significant for serious runners.

The battery life and water resistance of the Fitbit Versa vs. the Galaxy Watch Active

Battery life This is getting better every year that goes by. This is one area where Fitbit has never experienced issues, and the Versa is no different from its predecessors. On a single charge, it can operate for about 4-5 days. very good.

However, both gadgets have high water resistance. Both the Versa and Watch Active sport an excellent 5 ATM rating and will track the essential statistics during your swim sessions.

It goes without saying that both of these watches are highly capable of tracking fitness. From the two tech behemoths, we’ve learned to anticipate it.

The typical user will discover almost everything they require to continuously monitor their behavior. They will receive data about their movement, travel distance, active minutes, calorie burn, activity, and sleep. Additionally, there are VO2 Max performance measurements and moving reminders.

The Galaxy Watch Active’s integrated GPS is undoubtedly a benefit, as was already highlighted. This enables phone-free exercising in addition to music storage.

Watch Active’s ability to monitor stress levels is another fitness benefit. If the wearable detects a spike in your heart rate that cannot be ascribed to exercise, it will alert you to take a nap. You can then use Samsung’s breathing exercises to relax, which are similar to Fitbit’s guided breathing sessions.

Last but not least, Watch Active includes a beta blood pressure monitoring capability. It originates from a study app that users can choose to install and that was created in collaboration with the University of California, San Francisco. On this page, you can read more about it.

However, the limited battery life is a problem for something that is meant to track your activity constantly. This issue does not exist with Versa.

The Fitbit device also has an easy-to-use interface and excellent health and fitness tracking capabilities. Since this is what the business is known for, Therefore, while the Samsung Health fitness tracking system is a good choice, it falls well short of what Fitbit has to offer.

Versa also includes a female health tracking feature, enhanced activity and sleep tracking, and on-screen exercises. This enables women to observe how their periods affect all facets of their lives, including everything from activity levels to sleep.

It is very evident that both of these gadgets are lagging behind the Apple Watch in terms of non-fitness functionality. Samsung is closest, though.

Watch Active runs Tizen OS.You can respond to messages using your voice or the on-screen keyboard, and notifications can be handled seamlessly as a result. The variety of apps is likewise constantly expanding. Additionally, the Samsung tablet has built-in audio storage and an NFC chip that keeps credit card information, allowing you to leave your wallet at home.

Despite having music storage and Fitbit Pay, Versa’s FitbitOS doesn’t feel as refined in this regard. Additionally, there is an open SDK for third-party developers and an app store with a few native programmes.

It’s difficult to pick a winner amongst these two. You can, however, choose one of them with confidence.

However, if you’re searching for the best fitness companion, the Fitbit Versa is certainly a better option. It has an improved fitness tracking experience, a significantly longer battery life, and somewhat lower pricing.

The best all-arounder, though, is the Galaxy Watch Active, which combines superb smart features with reliable health tracking. It has built-in GPS, experimental blood pressure measures, and stress tracking. Additionally, if you want your wearable to resemble a classic watch more, this is the model you choose.

The Versa is a fantastic choice for a cost-effective workout gadget. If you choose the Lite edition, you can further reduce the cost. However, if you can use the built-in GPS and are equally interested in non-fitness aspects, Watch Active might be of interest to you.