Is The TicWatch E3 Worth Purchasing 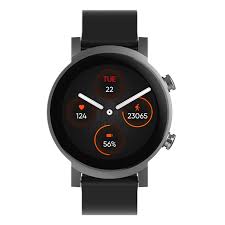 What Is Currently Known Regarding the Layout of the TicWatch E3

Which Operating System will be Available for the TicWatch E3

Is The Latest TicWatch E3 Model Really Worth Your Money

When Mobvoi shipped the TicWatch GTH to China at the beginning of this year, nobody anticipated that it would be available for purchase so quickly! On the other hand, it seems that the TicWatch E3 will be introduced very soon, and everybody is talking about it! Have a look at what we know about the newest piece of technology and what you may anticipate.

What Is Currently Known Regarding the Layout of the TicWatch E3

Especially in light of recent developments in wearable technology, we have been holding out for an upgrade to the E2 for the past two years. Because the E3 has not yet been released to the public, the specifics of its layout are currently unknown.

At this time, we are aware that the device has a round face and appears to be more slender than the E2 model. Additionally, in contrast to the E2, which only has a single button, this watch has two buttons that may be used to navigate the display. Although there is not much information available, the E3 appears to be a watch that is significantly more advanced than its predecessor. While maintaining the appearance of a luxury timepiece, we anticipate that it will appeal to consumers who are price-conscious.

Which Operating System will be Available for the TicWatch E3

The watch’s operating system is still a mystery to us because we are unable to access any official news regarding the device. Despite this, we have a good feeling that Mobvoi will honor its commitment to the Wear OS and make it available for this device as well. This is not really that much of a surprise; the Wear OS delivers the features that a budget watch like this will require in order to be useful.

Because it does not appear that there will be any new versions in line for Wear OS, it is possible that the watch may become obsolete. The encouraging news is that Google may provide several upgrades if there is sufficient demand for them.

As users become more familiar with how to maneuver through COVID-19, the E3 might come equipped with an improved processor and skin temperature sensors.

Other items about which we have reasonable grounds to speculate are the standard capabilities included with the E2. The other features we can expect are the utilization of a gyroscope, accelerometer, and other similar devices. In addition, it is waterproof up to a level of 5 ATMs and may be used to track a variety of activities in a proactive manner. We believe the built-in GPS is another feature that has been carried over to the new E3!

The current model of the E2 has a maximum run time of up to two days before it needs to be recharged. This is an area in which a great number of customers are requesting advancements, particularly given that the watches come equipped with GPS, which can be a significant drain on battery life.

Because of this, we have high hopes that the new device will improve upon the 415 mAh battery and provide something that can be used for GPS tracking while exercising. This feature can be used continuously without being recharged for a whole week. If you need to charge your smartphone consistently, then it is reasonable to assume that the charging process for this new device will need to be quick! If Mobvoi is unable to improve on this element, it could lead to customer dissatisfaction, which is something the company wants to steer clear of.

Is The Latest TicWatch E3 Model Really Worth Your Money

It is difficult to determine whether the newly released TicWatch E3 will be worth your money until we have much more information regarding what it has to offer and how effectively it functions. On the other hand, if you have been satisfied with your TicWatch E2 and are determined to continue using Wear OS, we are fairly certain that this new device will be of use to you.

Fans of TicWatch will be blown away by the new and improved functionality, the sophisticated new appearance, and the company’s dedication to offering the most bang for their buck. The only question that remains in our minds is whether or not Mobvoi will be able to attract any new customers with their most recent smartwatch - stay tuned for more information as it becomes available and watch this space!

Are you interested in purchasing a watch that has a greater emphasis on health? If this is the case, look at our recommendations for the top blood pressure monitors.