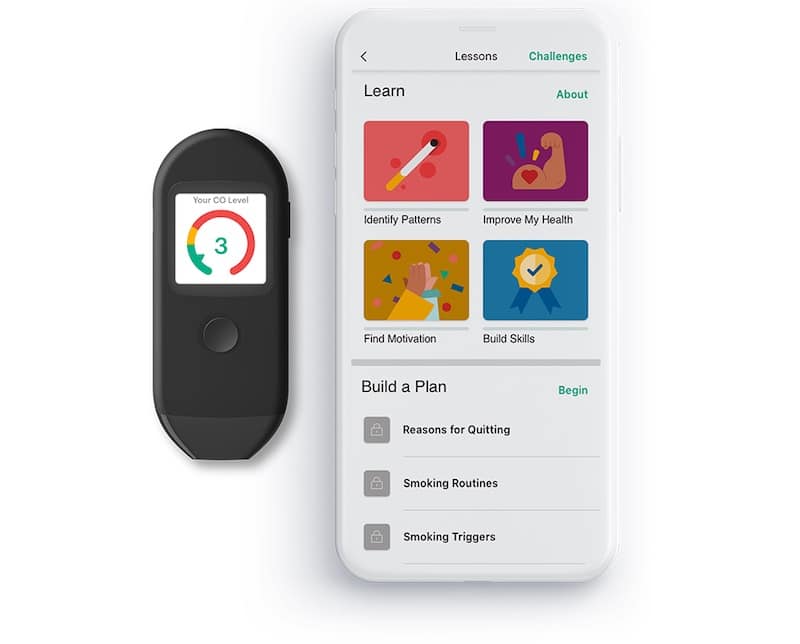 The Sensor of the Pivot Breath

The Pivot Carbon Monoxide Breath Sensor has been granted wider FDA clearance as a result of the agency’s observation that it has the potential to assist individuals in quitting smoking. This comes in the form of a brand new 510k approval, which is based on data that was previously released from clinical trials. This is in addition to the previous approval from the FDA that was obtained in 2017.

For the benefit of those who are unaware, the device was developed by a business known as Carrot, which is situated in Redwood City, California. They have created an entire ecosystem that is geared toward assisting individuals in giving up their smoking habit.

A component of this is the Pivot Breath Sensor, which is the first breath sensor available over-the-counter that has been certified for use by the FDA for use in smoking cessation. This implies that neither a prescription nor the supervision of a medical professional is required in order to acquire or use it.

Carrot’s Chief Executive Officer, Dr David S. Utley, was quoted as saying in a release that “this represents a tremendous advance in smoking cessation.”

“The introduction of an over-the-counter breath sensor that may assist individuals in quitting smoking is analogous to the availability of consumer-grade glucose meters, which enables individuals to take control of their own diabetes management,”

We are all aware that smoking is a destructive habit. Despite this, it is believed that around one billion individuals throughout the globe regularly partake in the use of tobacco.

The World Health Organization (WHO) estimates that cigarette smoking will kill approximately half of its users in the long run.This translates to around 8 million people every single day, 1.2 million of whom are non-smokers who are exposed to secondhand smoke. It is the most significant risk to people’s health that the globe has ever faced.

According to the statistics, this issue is more prevalent in nations that are considered to be developing. They are responsible for around 80% of these numbers. However, the results make for depressing reading in other contexts as well.

For instance, in the United States, smoking cigarettes is responsible for one out of every five deaths, which amounts to over 480,000 deaths annually. According to the Centers for Disease Control and Prevention (CDC), this is the biggest cause of disease, disability, and death in the nation that may be prevented. In the United States, there are around 50 million individuals who use tobacco.

The Sensor of the Pivot Breath

When you smoke, your body takes up carbon monoxide (CO), which may then be found in your blood. Your amount of exposure may be quantified with the use of the Pivot Breath Sensor, which monitors these levels in exhaled breath. Simply blow into the keychain-sized sensor in order to receive a reading. This is all that is required.

There is a companion app that can be downloaded to go along with it. This aids in the development of skills for quitting the harmful habit and keeps track of trends such as the number of cigarettes smoked. It also analyzes patterns and keeps track of how many times certain patterns occur.

It is hoped that, as time passes, it will reflect how your levels of CO are decreasing, acting as a motivating aid in the process. In addition to that, it will tell you how close your CO levels are to those of a non-smoker as well as how much money you have wasted on your habit. Finally, you have the option to work with a real-world coach who will provide you with support throughout your journey via private in-app messaging.

Clinical testing has provided evidence that demonstrates the sensor’s use. Late in 2012, one of these was included in an article that was published in the Journal of Medical Internet Research.

It was found that 39% of the 234 heavy smokers who participated in the research were successful in cutting their tobacco consumption by more than half in only three months. Roughly half of the individuals reported having at least one successful quit attempt that lasted longer than a day. Participants in the trial who used the tobacco sensor had a significant advantage over those in the control group in terms of their likelihood of quitting smoking.

This most recent certification from the FDA demonstrates that the Pivot Breath Sensor is recognized as going above and beyond just assessing the effects of quitting smoking. It has been shown to be effective in helping individuals stop their habits. Carrot now has authorization from the FDA to include this information on the product labelling and to commercialize the sensor with it.

The gadget is available for purchase via a diverse variety of companies and medical insurance providers. Individuals may also get Pivot without a prescription by going to the carrot. co and placing an order.