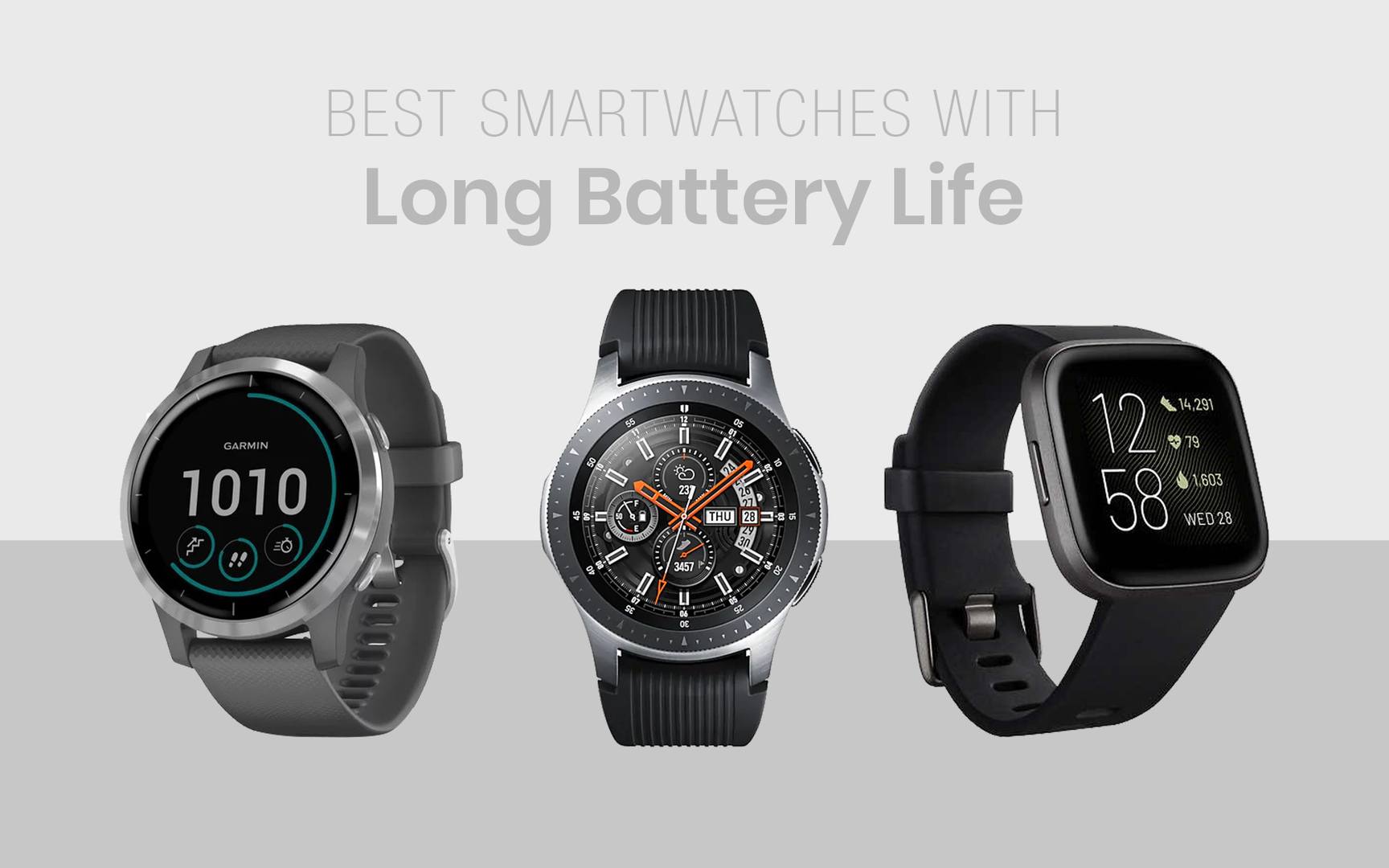 There are so many brands and varieties of smartwatches available these days, each with its own set of capabilities, that you’ll want to do your research before deciding. What are the smartwatches with the best battery life? Without a doubt, one of the most crucial questions you’ll ask. So, if you’re looking for the longest-lasting smartwatch, you’ve come to the correct place.

The facts of smartwatches and battery life are simple. The more functions your watch has and the more it resembles a smartphone in appearance and functionality, the more energy it consumes. Apple Watches have worked hard to function like smartphones, and as a result, their battery life has suffered as a result. Some timepieces are better than others at performing various activities. Fitness watches usually don’t have any music or smartphone functionality, but they’re great for tracking your movement over time.

There are a few things you can do to extend the battery life of your Apple Watch.

While some smart and fitness watchmakers are working on ways to make their watches last longer without needing to be recharged, others aren’t. For battery life, we’ve compiled a list of the top smartwatches on the market. We questioned industry leaders like Apple to see why, despite their popularity, they aren’t always the best option. As a result, we’ve compiled a list of the best smartwatches with the longest battery life.

While there are a few other versions of the Fenix 7, Garmin’s Fenix 7 Standard—a smartwatch that you can also get in Solar (see below!)—has an exceptionally reliable battery.

In smartwatch mode, you can expect nearly 18 days of battery life, or more than 50 days with the Battery Saver Mode set. The case is medium-sized in terms of Garmin smartwatches, measuring 47mm, and is as durable as GPS sport watches get: the bezel is composed of stainless steel, and the screen is protected by Corning Gorilla Glass DX. The Fenix 7’s ruggedness is likely to appeal to someone who also requires a long-lasting battery: you’re going to be outside a lot and away from electricity. You’ll be covered for nearly two weeks of sport and enjoyment with the Fenix 7 Standard Solar version!

The Fenix 7, like most Garmin multisport smartwatches, comes with a slew of functions targeted at encouraging activity, fitness, and overall health. This watch tracks a variety of sports, including sun, ski, surf, running, boating, and more.

There are two additional advantages to purchasing Garmin’s Fenix 7 Sapphire Solar, as stated in the name. To begin, this smartwatch charges its battery with light from numerous sources. Your batter will get energy as long as you step outside! The second feature is the Power Sapphire lens, which, when combined with the titanium bezel, creates an ultra-powerful timepiece.

So, how long can you expect a Solar Fenix 7 to last? The battery life of a solar Fenix 7 triples in battery conservation mode, from over 50 days to over 150 days! And if you’re going on a long vacation or adventure and need GPS all the time, your Fenix 7 Solar can last up to two days before needing fresh solar power.It has the same great features as the Fenix 7 Standard or even the Fenix 6 when it comes to health monitoring and activity tracking.

The Instinct 2 Solar, one of Garmin’s newest smartwatches, has an unlimited battery life in smartwatch mode. The GPS, all-satellite, and power conservation modes all provide an incredibly extended battery life.

The Instinct 2 Solar is half the price of the Fenix 7, and you get more standard materials and design as a result of the lower price. Instead of being made of metal, the bezel is constructed of reinforced polymer.

The Instinct 2 Solar is also available in three of the five editions: Standard, Tactical, and Surf. These Instinct 2 versions also provide a wide range of design and color options.

Garmin is unquestionably the best in terms of battery life. Depending on how it’s utilized, the Garmin Fenix 6 Solar can last up to 120 days. It can survive up to 150 hours in GPS mode and up to 56 days in expedition mode, depending on how sunny it is. This is due to the addition of solar charging and improved energy storage. As a result, it’s a large watch that will stand out on your wrist. For tough adventurers, this muscular watch is an appealing option. Trim down other features to provide a premium product for customers with a specific need. This model can store up to 2000 songs, which is a significant advance above previous models. Garmin Pay was also added. As a result, you can go for a run without having to worry about your phone.

We expect the Fenix 7 to have even better battery life, and solar charging may be included as standard.

Cons: style is an acquired taste, and it’s expensive.

The Ticwatch Pro 4G Lite, on the other hand. Although the battery life of this smartwatch is only 30 days, compared to the 120 days of the Garmin Fenix 6X Pro Solar, you get more functionality crammed into its attractive display. However, the battery life of 30 days is significantly longer than that of most smartwatches. This is due to the use of layered display technology, which consists of two displays: OLED and LED. Organic light-emitting diode (OLED) is a type of light-emitting diode used in TVs and smartphones. This display mode, as you may expect, requires more battery power than the LED screen. When the OLED display is not in use, the LED display is turned on.

This is, of course, a personal preference that can be altered in your settings. You’ll have to charge your watch every two days if you alter the settings display to OLED exclusively. However, this isn’t as common as it is with the Apple Watch Series 5, which boasts a 24-hour battery life and the flagship Always On Display. The Ticwatch Pro includes excellent fitness tracking apps and features in OLED mode, including Google Assistant and Wear OS, Google’s wearable operating system.

Battery life is superior to that of most smartwatches.

Design that is fashionable

Cons: In OLED mode, the battery life is only 2 days.

Luxurious and fashionable, with none of the sporty design elements found on so many fitness and smartwatches. A touch screen and two side buttons make up the Amazfit GTR. On a single charge, the battery can last up to 24 days. Despite being less than the Ticwatch’s four weeks, this is still longer than other smartwatches. It saves battery life without requiring you to choose between basic LED and smartwatch functionality. This is because the watch has a built-in setting that shuts it off when it is turned away from you. You can modify the setting, but a warning will appear on the screen stating that doing so will reduce the battery life by half.

Amazfit has its own light OS and only allows native apps to be installed on the watch. For some, not being able to install third-party apps may be a problem, but how many apps do you actually want on your watch? The pre-installed fitness and health tracking apps on the Amazfit make it a far more stylish fitness alternative than the Garmin Fenix 6X Pro Solar, especially if you don’t plan on going on extended outdoor adventures.

Pros: A good balance of style and functionality.

The battery life is adequate for an adventure watch, with 36 hours in GPS mode and a whopping 336 hours when the bells and whistles are turned off. A barometer, thermometer, accelerometer, pedometer, and gyroscope are among them.

The Fenix 6 is Garmin’s most recent model, and it includes the Elevate heart rate sensor. This is ideal for those who like to keep track of their fitness. Make use of the Body Battery, which keeps track of your energy levels. Advanced sleep and stress tracking can be quite beneficial. To gain a good picture of your current fitness level, use the continuous heart rate monitor.

Advantages: The best brand name on the market.

Cons: The battery life is exceptional only while using the bare minimal features.

Last but not least, there’s the new Garmin Instinct Solar series, which comes in a variety of types and designs. On a single charge, these watches can last up to 56 days. They’re stylish and functional, plus they’re from a reputable brand.