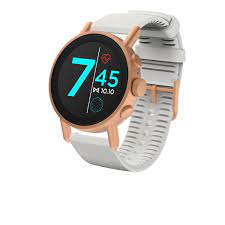 It has been less than a year since Misfit launched the Vapor 2, and we already have the product that will replace it. The Vapor X may not appear to be all that drastically different from its predecessor, but it has been redesigned with an ultra-light case composed of an aluminum alloy and additional pushers for the customization of its functions. The whole package comes in at only 43 grams. In addition to that, the strap has been redesigned. It is now more comfortable to wear because of the improved fit and ridges that allow air to circulate.

Vapor X is only offered in one diameter size, 42 millimeters, in contrast to its predecessor, which was sold in two different dimensions. This stunning device features a 1.19-inch AMOLED display that has a resolution of 328 pixels per inch.

The Misfit Vapor X is the newest addition to the limited set of Wear OS watches that flaunt Qualcomm’s most recent 3100 processor. Even though the CPU isn’t being used to its full potential yet, it already lets you use power-saving modes, make adjustments for sports watches, and improve the watch faces that are always on.

There haven’t been many more significant changes made under the hood, which isn’t necessarily a bad thing because there’s already a lot to get your teeth into. The watch has a number of sensors, such as an accelerometer, altimeter, gyroscope, optical heart rate sensor, GPS, NFC, ambient light, and a microphone.

The new Vapor X has the same battery life as its predecessor, which is approximately one day between charges. It goes without saying that the situation is not quite ideal. But now there is a new battery saver option that will extend this by an additional two days beyond what it was previously capable of. The lightning-fast charging method makes another appearance. This means that the smartwatch can get almost a full charge in an hour.

Misfit has decided to provide the Vapor X with some newly developed software already pre-installed on the device. This includes Spotify, a service that lets you stream music all over the world, and Cardiogram, an app that can predict and prevent heart disease.

Vapor X is available for purchase in a wide variety of colorways to choose from. The retail price for each of them is $279. However, if you act fast, you may purchase the watch for the introductory price of $199.99 today only. This offer is only valid for today.

According to Hacker Plotkin, Vice President of Misfit, “Misfit has long stood for producing wearables that introduce fans to the latest technology the market has to offer, while also letting them express their particular style through our innovative designs.” Misfit was founded on this principle.

“We realize that with the debut of Misfit’s Vapor X, we have a unique chance to unveil our most inventive design and achieve our goal of empowering audiences,” said the company’s CEO.