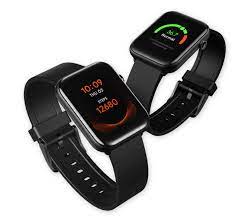 Specs for the TicWatch GTH may be found here

Mobvoi has announced that the TicWatch GTH will be available worldwide. Since the beginning of this year, consumers in China have been able to buy the item at local retailers.

The most recent watch follows closely on the heels of the TicWatch Pro S, which was introduced in both the United States and the United Kingdom a month ago. This one is essentially the 2021 update to the TicWatch Pro 2020. There are now 8 gigabytes of ROM rather than 4 gigabytes, and there have been some software changes, but otherwise, everything else remains the same.

Specs for the TicWatch GTH may be found here

TicWatch GTH was first shown to the public for the first time in January 2021 in China, which is Mobvoi’s home market. It features a temperature tracking function that is operational at all times of the day and night, which is not very commonly found. In these times of the coronavirus, most people would agree that this information is useful.

Automatic readings of the temperature are taken at regular intervals (about once every ten minutes) around the clock. The time required for a single reading is approximately five seconds. It would appear that the technology is sensitive enough to detect fluctuations in temperature as small as 0.1 degrees Celsius. If the gadget thinks that you may be getting sick from something, you will receive a notification about it.

Aside from that, you will receive the standard PPG optical sensor in addition to an accelerometer. Because of this, you will be able to monitor your stress level, heart rate, blood oxygen level, and breathing rate at all times.

In addition, continuous monitoring of blood oxygen levels is performed automatically. A decrease in your levels is another sign that COVID may be approaching its end stage in your body.

In terms of physical activity, there are fourteen different sports modes. This encompasses activities like jogging both inside and outside, as well as hiking, cycling, stationary bikes, soccer, basketball, gymnastics, rowing, yoga, rope jumping, and free workouts. Swimming is another activity that can be found because of the 5 ATM’s resistance to water.

The watch has a very unremarkable appearance, and its construction is comprised of a square metal frame. This is fastened to a silicone strap that can be removed if desired. A circular button may be seen on the right side of the body. This button serves as a shortcut and also activates the display. The item has exact dimensions of 43.2 millimeters by 35.2 millimeters by 10.5 millimeters.

The TicWatch GTH has a TFT display that is 1.55 inches in size. The display features a resolution of 360 by 320 pixels and a pixel per inch (PPI) density of 310. Additionally, the screen is protected by 2.5D curved glass, which shields it from scratches and drops. You have access to a variety of watch faces, including the ability to upload your own pictures to use as a watch face.

A battery with 260 milliampere-hours is providing all of the power. A single charge is sufficient to power this for around one week. This would last for ten days in a scenario described as “moderate use.” The entire process of charging, from empty to full, takes exactly two hours.

As was previously announced, beginning at the beginning of this year, the timepiece has been made available for purchase in China. This is a wearable on a tight budget. Mobvoi.com is now the place where customers in other countries can get the TicWatch GTH for the price of $79.99. (Check price on Amazon).