The Scosche RHYTHM24 is now available, and it has waterproofing as well as a battery life of one day 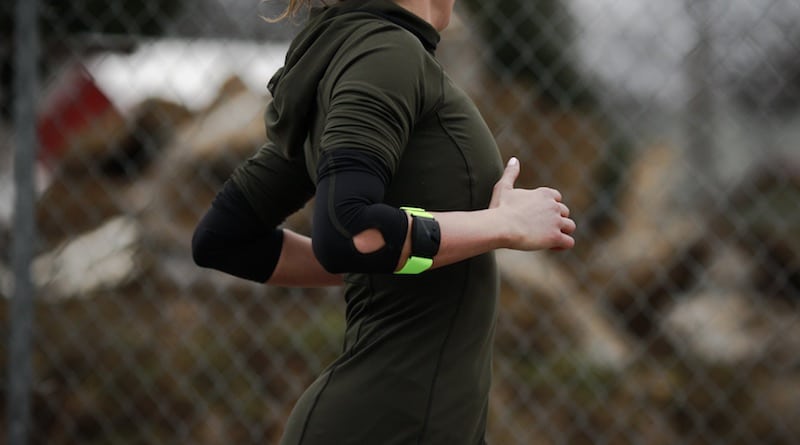 It is now confirmed that Scosche’s next generation of their hyper-accurate wristband heart rate monitor has been released. It looks completely new, has a wider range of features, and can be used in a number of different ways.

The RHYTHM24 is a heart rate monitor that may be worn on either the forearm or the upper arm. It was introduced earlier this year at CES 2018. It has a flexible polycarbonate and silicone hybrid construction, and it has a pliable elastic strap. Because of this, it may be worn comfortably and is much simpler to put on than a chest strap would be. The device is equipped with the most recent iteration of Valencell’s PerformTek technology, which utilizes both green and yellow optical sensors to read your heart rate through your skin. By combining these two elements, higher precision is achieved across all different types of skin.

The original RHYTHM+ from Scosche was a very successful product, and it has been in need of an update for a very long time. It was the first of its kind when it was introduced to the market a few years ago. This is no longer the case, and there is now direct competition in the form of the Polar OH1 and the Wahoo Tickr Fit.

In addition to maintaining connectivity via Bluetooth Smart and ANT+, the RHYTHM24 introduces a number of significant upgrades in comparison to its predecessor. This is a big improvement over the previous model, which only lasted for eight hours, and the name of the new device suggests that it will now last for twenty-four hours between charges.

The addition of waterproofing is yet another significant improvement. The water-resistance rating of the device’s second version is IP68, which indicates that it will just about make it through a swim session. RHYTHM24 also comes with internal memory, which retains your readings securely and enables you to exercise without needing to use your phone. This feature is equally as crucial as

You have the option of selecting from five different training modes, as well as two multi-modes, and an LED battery indication with lights that show different heart rate zones. In addition to that, the wearable gadget has a heart rate variability (HRV) mode that tracks the amount of time that passes between each heartbeat in order to assess stress and recuperation. There are also profiles for many different activities, such as swimming, jogging, and cycling.

The heart rate monitor can be used in conjunction with a wide variety of different fitness apps. Included in this category are RunKeeper, Map My Fitness, and Strava, in addition to any and all other software applications that enable Bluetooth Smart. In addition, it works with fitness gadgets that use the ANT+ standard for technology.

Amazon is now carrying the RHYTHM24, as well as a number of color options available for its interchangeable armbands for the device. In the following weeks, we will be conducting tests on the heart rate band; therefore, keep a look out for our evaluation.