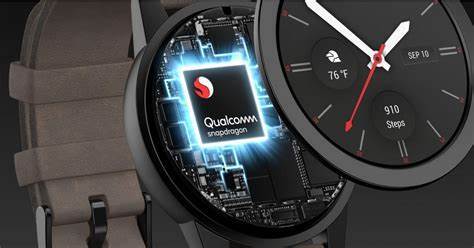 The forthcoming processor for smartwatches manufactured by Qualcomm, called the Snapdragon Wear 5100, has had some fresh information disclosed about it. It would seem that this would be a rather small improvement, and the CPU may not be as strong as the one that is featured in the Samsung Galaxy Watch 4.

However, despite the fact that they were introduced more than a year ago, there are now just a few smartwatches on the market that are compatible with the platform. The Fossil Gen 6 watch is the one that came in as the newest member of the club. In the next weeks and months, we anticipate a pick-up in adoption due to the arrival of further Fossil and Mobvoi watches.

In spite of this, it is high time that we have a look at the subsequent revision of the Qualcomm processor.

The people over at Winfuture conducted some research and came up with some information about the new CPU. According to earlier reports, the next processor will be known as the Snapdragon Wear 5100. (and goes under the moniker SW 5100).

Winfuture thinks that the CPU will not be employing the latest Cortex-A73 cores, contrary to prior rumours and leaks that suggested otherwise. This indicates that the next Qualcomm chip will not be manufactured utilizing the 5nm technology, which is used in the Exynos W920 featured in the Samsung Galaxy Watch 4. Because of this, we might draw the conclusion that its effectiveness and potency will be diminished.

Further information revealed by Winfuture indicates that the 5100 processor that Qualcomm is now testing has four Cortex-A53, which indicates that the chip retains the same number of CPU cores and configurations as its predecessor. The clock speeds are a mystery at this point in the process. There will be an extremely low-power co-processor in both the present generation and the one that comes after it, which is another thing that both generations have in common. This is used for the purpose of unloading activities, such as monitoring one’s heart rate and sleeping patterns.

However, some minor improvements in overall performance may be discovered elsewhere. The first batch of the chip is now being evaluated with 1 and 2 gigabytes of random access memory (RAM), as well as 8 and 16 gigabytes of embedded multi-media card (eMMC) flash storage. This corresponds to the enhancements that may be found in Samsung’s most recent watch. Additionally, there is support for LPDDR4x RAM, which is an improvement over the LPDDR3 RAM found in the currently available Snapdragon Wear SoCs. It has been stated that several variants of the 5100 chip are now being tested with cameras that have resolutions of both 5MP and 16MP.

At the beginning of October, Qualcomm will often make announcements about new wearable processors. However, it might be a little later this year since the firm may want to give smartwatch companies a little bit more time to acquire the Snapdragon Wear 4100 series. This could be the reason for the delay. which indicates that an official announcement may not come for a few more months.