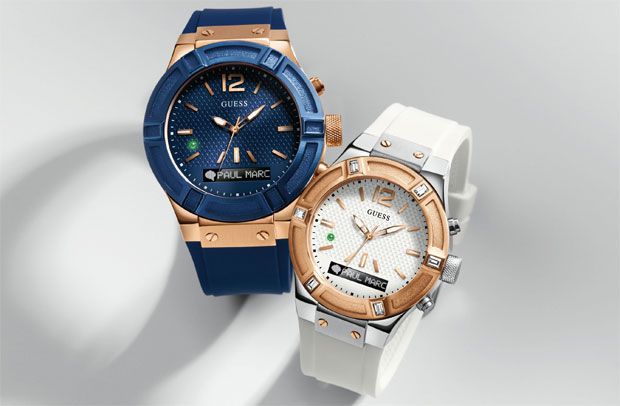 Guess a well-known fashion company has introduced a new smartwatch, but it is not equipped with all of the bells and whistles that are available on Android Wear-based watches. The Guess Connect smartwatch is just a watch that looks more traditional, but it comes with a number of advanced features.

Guess, which has recently joined the smart technology bandwagon, has decided against engaging in a David vs. Goliath confrontation with industry heavyweights such as Samsung or LG and instead appears to be more interested in displacing competitors such as Fossil or Kate Spade.

Guess contracted with Martian to supply the intelligent technology; this isn’t their first attempt at a smartwatch together; in 2015, they developed a version that was bulkier than the one they have now.

There are a number of different styles available for the Guess Connect smartwatch, including the Jemma line for women, the Cassidy line for a more unisex look, and the Ace line for men.

Both Android and Apple phones are capable of pairing with your Connect device. Either provide a straightforward app for the purpose, after which any notification that might be sent to your phone would be displayed on the watch’s very small screen, or

Since you are unable to respond through the watch, those alerts are, in effect, instructing you to retrieve your phone from your pocket or purse.

You have the ability to adjust the volume of a call, and it is equipped with a microphone that enables you to communicate verbally with either Siri or Google Now. There are also some helpful controls for the music, such as the volume, skipping tracks, pausing the music, moving ahead and backward, and so on. The watch does not come with any storage, so in order to listen to music, you will need to stream it from your smartphone.

Although the Guess Connect wristwatch is quite simplistic, you shouldn’t judge it too harshly due to its price point. In spite of its unassuming nature, it encountered bugs quite infrequently, if at all; this is not something that can be stated about the more well-known FitBit smartwatches.

The Bluetooth connection appears to be quite stable, which is always wonderful because it means you won’t have to reset and reconnect a device over and over again.

It does not provide any health monitoring at all. There isn’t a heart rate monitor, a sleep tracker, a step counter, a GPS, or anything else similar to that. The Guess Connect is not for people who are interested in learning whether or not they have finally broken the ten-minute mile barrier or whether or not they have burned enough calories to have a lovely glass of Pinot.

The software is not overly complicated. It gives you the ability to control which applications’ notifications you wish to be displayed on the watch face. You also can perform things like specifying the type of vibration pattern that you prefer for each app. You won’t need to glance at anything to find out what information has been delivered to your phone, which is a great convenient feature.

According to Guess, the Connect has a battery life of three to five days on a single charge, and testing conducted by users has shown that this estimate is correct. Because the main thing you’re using it for is to read alerts, to which you then answer on your phone, and to check the time, there’s not a lot asking much of the battery, so you should anticipate it to last for a good few days at the very least.

The Ace, Jemma, and Cassidy all have somewhat different sizes, with the Ace coming in at 44 millimeters and the Jemma and Cassidy both measure 41 millimeters. Smartwatches are, without exception, on the heftier side of things. You can replace the strap with one made of a lightweight material such as silicon if you prefer something that is more delicate.

The manner of dress unquestionably makes a proclamation. The Connect smartwatch takes the opposite approach to that taken by other smartwatches, which prioritizes functionality over aesthetics. There are no unsightly screws or lugs on display; instead, there is a single, peculiar button that can make navigating challenging; nonetheless, a touch screen can do most of the functions.

It is available in a variety of finishing options, such as black and gold, blue and rose gold, or a combination of the two. You can select one of several familiar faces for the screen or create your own color scheme. A word of caution: the screen really enjoys clinging to your fingerprints.

There is not even the slightest bit of monitoring done for physical fitness. When you purchase a designer smartwatch, you’re really paying for the watch’s appearance rather than its ability to monitor your heart rate, provide GPS coordinates, or perform any other function connected to fitness.

You might be interested in Fossil’s Gen 3, which is not only more delicate but also more affordable in comparison, despite having the same features. In the Armarni Exchange AXT2007, for a small (but not insignificant) sum of additional cash, you may acquire the heart rate monitor and GPS capability that are absent in the Connect.

The Guess Connect smartwatch is a blend of tradition and technology, but at its core, it is just an analog watch that has some digital capabilities added to it. As a result of the fact that it is neither here nor there, it is somewhat disappointing.

The intelligent component does not provide a particularly intelligent user experience; navigating the apps through the watch face is difficult. Even if you adore the appearance of the Connect and are willing to get beyond the fact that it is not technologically advanced, you will find that it is not very good around water. Depending on the circumference of your wrist, it could feel cumbersome, and you can’t help but feel it. When Guess reached the conclusion of the design phase and put a plastic rear panel on it, they became uninterested in continuing the project and gave up.