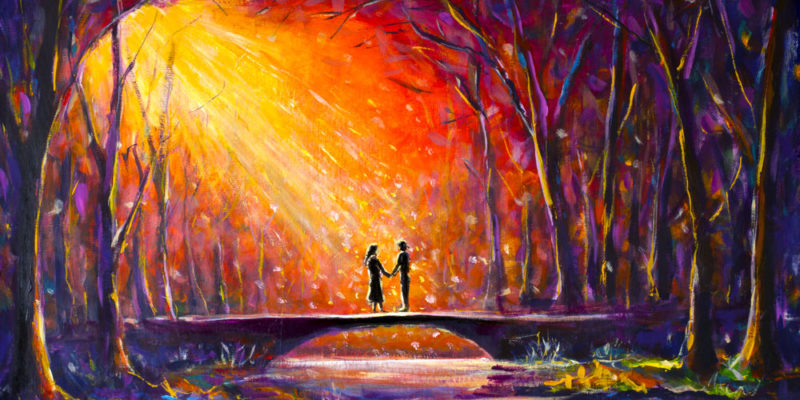 We explain what impressionism was and when this artistic movement emerged. Also, what are its main features?

Impressionism was an artistic movement, mainly pictorial , that emerged in Europe in the second half of the 19th century, mainly in France , and whose main postulates were the abandonment of full and identifiable figures, in favor of painting light and capturing its presence. in a specific panorama, beyond the forms that could underlie it.

The main exponents of this movement were those exhibited at the Salon of Independent Artists in Paris between April and May 1874 , a list that brings together such important names as Claude Monet, Edgar Degas, Pierre-Auguste Renoir, Camille Pissarro, Paul Cézanne, Alfred Sisley and Berthe Morisot.

This movement was fundamental in its groundbreaking character to give rise to what would later be the European avant-garde , and served as inspiration for similar initiatives in music (Debussy), literature (Brothers Goncourt), sculpture (Rodin) and cinema (Jean Renoir ).

The term “ impressionist ” was first used in a derogatory way. It is attributed to an art critic named Louis Leroy , who would have used it as a mockery in front of a Monet painting: Impression, Rising Sun (1873).

Inspired by the title of this painting, the critic lashed out in the press at the thirty-nine “Impressionist painters” exhibited in Paris, unknowingly giving a name to one of the most important pictorial movements of the century . 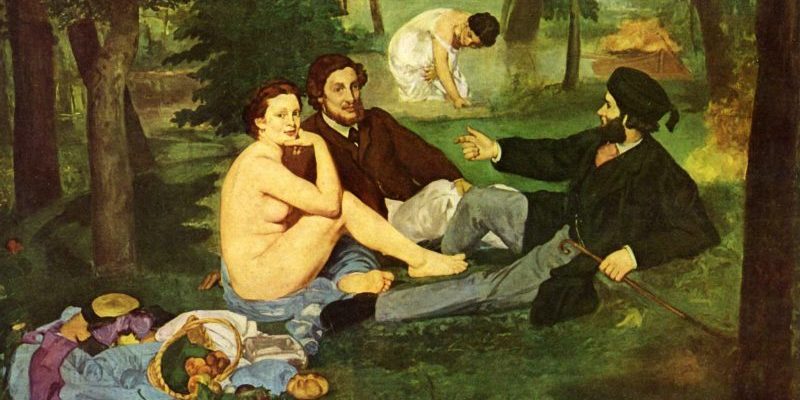 An outstanding precursor of Impressionism was Édouard Manet.

Among the forerunners of impressionism are considered to be the English landscape painters of the 19th century , in the midst of romanticism , who were already trying to describe scenes that transcended form and allowed themselves a certain vaporousness, a certain fleeting mood, such as JM William Turner and John Constable.

Another important precursor will be Édouard Manet with his Luncheon on the Grass (1863) , a painting from which the Impressionists inherited the disregard for the story and the model, leaving aside the traditionally most important elements in painting .

Finally, Camille Corot and the Barbizon school , in their efforts to break many of the current Renaissance precepts in painting at the time, paved the way for the emergence of the future Impressionists. Corot always opted for flatter, simpler spaces and more luminous surfaces: a prelude to the light of the Impressionists. 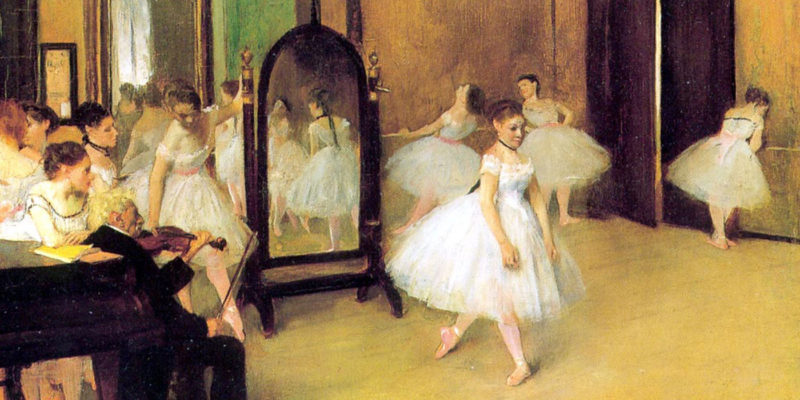 Degas painted artificial lighting in his paintings of ballerinas.

Similarly, the Impressionists left form in the background, preferring to explore the different modes of lighting : artificial lighting indoors, as in the case of Degas and his ballerinas; natural lighting filtered through the leaves, as in Renoir; or the natural lighting of a lake and a crowd, as in Monet.

In this they turned their backs on the classicism that placed volume and form as the main concern of painting, rather shifting their attention to light and color.

The landscape was perhaps the great protagonist of Impressionism , since the open panoramas allowed the amount of light and color necessary for his pictorial methods. However, the difference between impressionism and realism is that the former relies on the painter’s chromatic and light impression, rather than on his desire to reproduce a perceived reality. 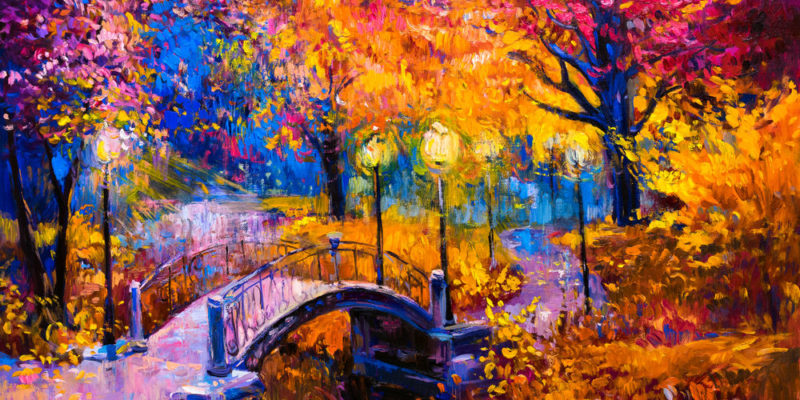 The Impressionists broke with the dynamics of chiaroscuro.

One of the advances of impressionism and of the time points to the creation of new pigments from which to have purer colors . This allowed painters to rethink many of the chromatic laws in force until the time, being able to understand color in relation to its companions and the contrast they generate.

Thus, the Impressionists dared to make shadow games that broke with the dynamics of chiaroscuro , which used light values to generate shadows and perspective, in favor of shadows made with complementary colors, thus giving a sensation of greater depth to the work. .

This advance would later be essential for the avant-garde to which Impressionism opened the door.

This has been called the brushstroke model of impressionism, although psychological theories about Gestalt emerged later. However, the Impressionists seemed to already understand them, since their brushwork model opted for achieving a unitary whole from unconnected parts .

Impressionist brushstrokes were brief and pure in color, regardless of the fact that they were in isolation not relevant to the shape or color of the real model; but once the work was completed, those brushstrokes could be perceived globally and reproduced a defined totality , endowed with luminosity and vibrancy. A technique, this one, that would be used later by the neo-impressionists or pointillists. 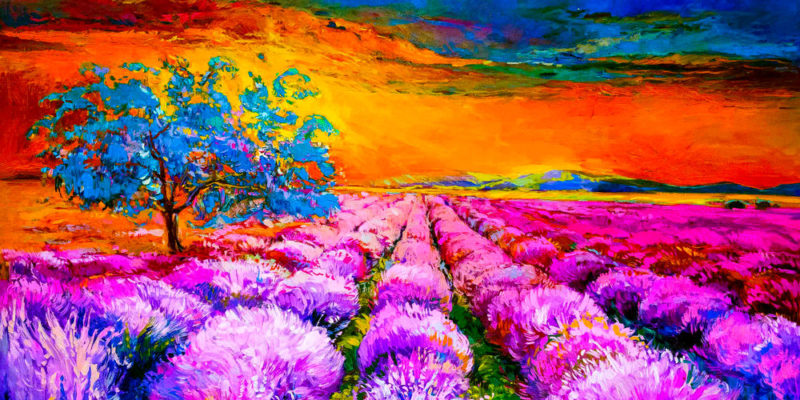 The impressionist school enjoyed acceptance in many European countries such as Germany.

Despite what the origin of its name would suggest, Impressionism enjoyed acceptance in European art circuits at the time . In fact, the Paris of the time was the place of artistic pilgrimage of the time, and numerous universal exhibitions were held there in which Impressionism played an important role.

Perhaps due to this, it did not take long to expand its influence in European art schools , establishing itself as a trend and rapidly translating itself into local artistic experiences. The Impressionist school enjoyed acceptance in many European countries, soon spawning local variants in Germany , Belgium, Spain , the Netherlands, Hungary, Italy , and even the United States.

Although numerous Impressionist painters were and still are an obligatory reference of the period and of painting in general, not all of them accepted Impressionism as orthodoxy.

It was Claude Monet who occupied the most representative place in the group, perhaps because he was extremely prolific and because his works were the ones that best defined the aesthetics of the group.

Pissarro played a vital role in the constitution of the group , more as an artistic and moral conscience of the group than as an executor of the technique itself. He was the only one to participate in all eight exhibitions of the Impressionist group in Paris.

Cézanne, on the other hand, is very often regarded as an Impressionist, although he would later leave the group and anticipate the coming forms of Cubism .

Between 1874 and 1886 there were eight Impressionist exhibitions in Paris , outside the official salon of the French Academy of Fine Arts . This represented an advance in the independent character of the contemporary plastic artist with respect to official art institutions, and in the constitution of a private market for works of art.