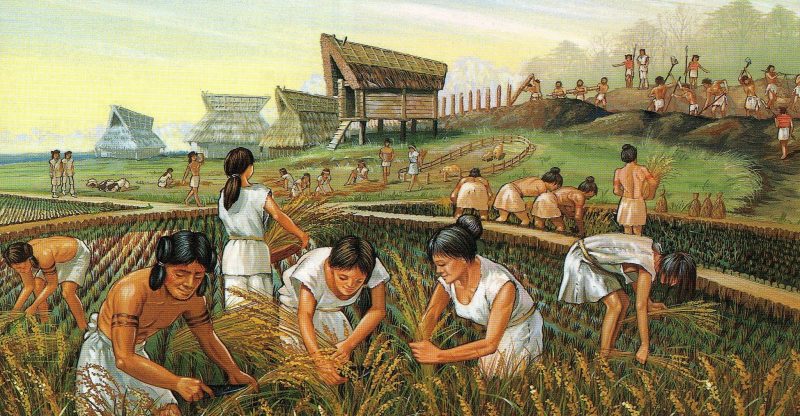 What is the Neolithic Revolution?

Characteristics of the Neolithic revolution :

We explain what the Neolithic revolution is, how it originated and its main inventions. Also, their characteristics, religion and more.

What is the Neolithic Revolution?

The Neolithic revolution  was a crucial change in the ways of life of humanity , in which one goes from a nomadic lifestyle to a sedentary one, which also entails an economic transformation, from a collecting economy to an economy producer.

Although it is known as “revolution”, historians insist that it was a rather gradual change , which occurred, according to Gordon Childe (1941), the most accepted theory so far, in the eighth millennium BC, due to a climate crisis at the beginning of the Holocene. On the basis of its importance for the history of mankind, he claimed the term “revolution” for himself.

Next, and as a summary of the Neolithic revolution, we present the most important characteristics.

Characteristics of the Neolithic revolution : 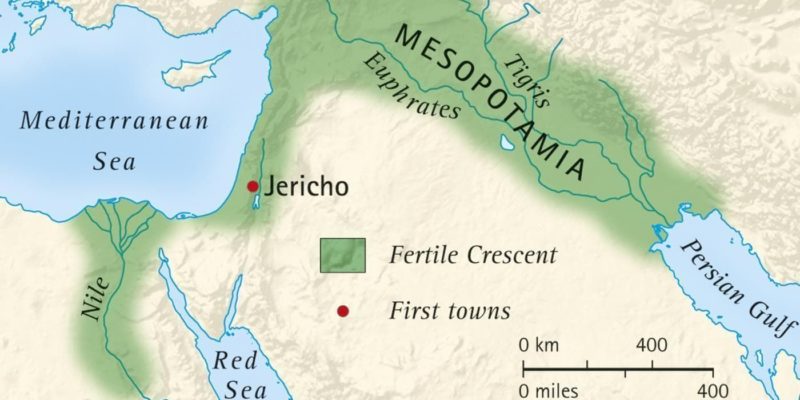 The influx of the Tigris and Euphrates allowed cattle ranching and agriculture.

According to Gordon Childe, it occurred in the “Fertile Crescent” , which covers the Egyptian area from the Nile Valley ( Africa ) to Mesopotamia , between the Tigris and Euphrates rivers ( Asia ). The cause would have been a climate change, which produced a dry land and man had to plant and reproduce nearby animals . Due to the influx of the Tigris and the Euphrates, livestock and agriculture became possible. This would be the center from which the Neolithic would spread.

According to Braidwood (1971), climate change was not the main cause since it had already happened before . Nor does he consider that Mesopotamia was the center. According to him, what most explains the transformation has to do with the degree of advancement that humanity had then.

The cultivation of cereals gained relevance , especially rye, wheat and barley , characteristic of the Fertile Crescent zone. It is believed, however, that they were not the first plant species to be cultivated. Legumes date a very ancient cultivation and also some fruit trees from Asia. The use of ferments and yeasts , responsible for making bread and dairy products and, consequently, for alcoholic beverages , is also recorded . 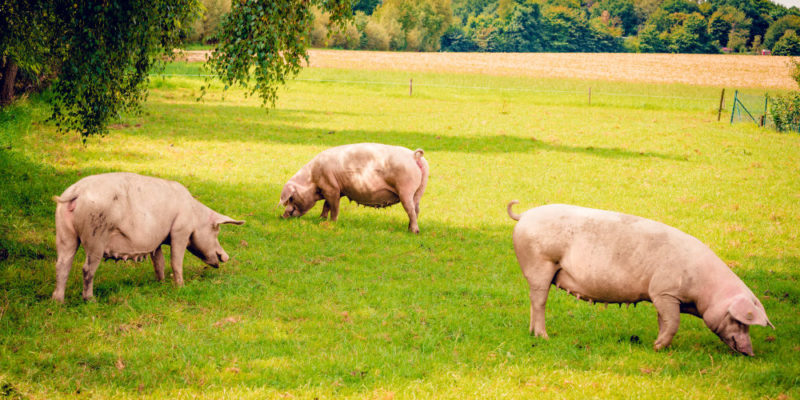 The pig occupied a leading place in livestock.

Among the mammals that were selected for livestock, the pig occupied a main place . Poultry and raptors were used, particularly ducks and chickens. There is information about the use of insects , for example in beekeeping -bees- and in sericulture -silk worms-.

They found garments made from linen and wool , while presupposing that knowledge of animal breeding and cultivation. In this period the looms were created, machines that were used to weave and that for the moment are of an interesting complexity. 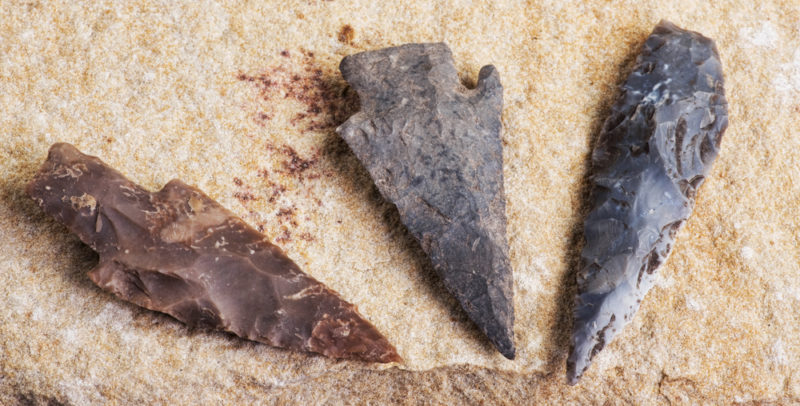 The microlitization produced a greater number of tools such as arrows.

This is the name given to the reduction of lithic elements (stonework) , which allows greater flexibility in their use and standardized production to create more tools, for example, arrowheads. This tendency to microlitization is already recorded in the end of the Paleolithic, but it is intense from the Neolithic revolution. 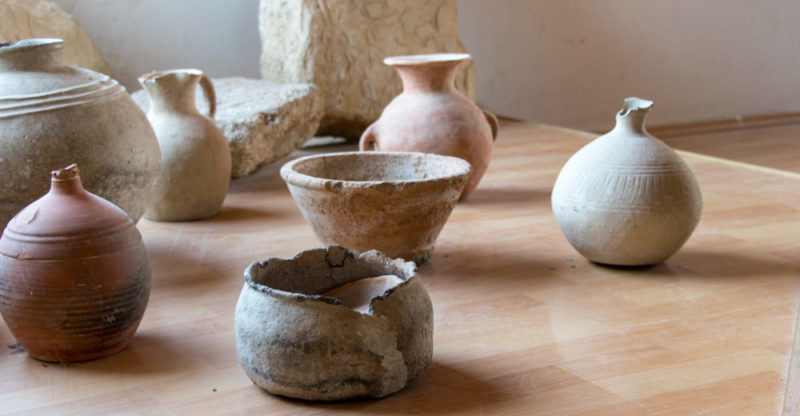 During the Neolithic revolution, pottery was widely used.

It happens around the VII millennium BC, in Anatolia . What was called “empty space” appears, for the containment of food and the kitchen on fire . Still, some Near Eastern cultures were found to already use pottery. However, it is worth highlighting the extensive and varied use that was given to ceramics during this period, in which the construction of agricultural instruments is more important than hunting.

At this point, it should be noted that livestock, through transhumance, allows communication between distant men -and villages. 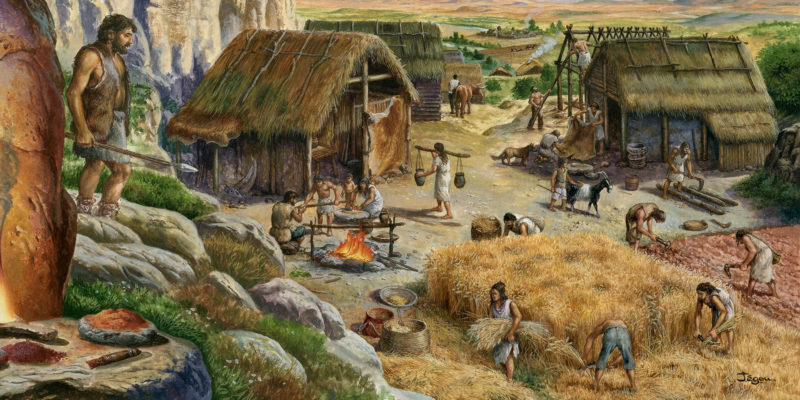 The first type of trade during the Neolithic revolution was barter.

In the Neolithic there was a demographic increase with respect to the Paleolithic, thus society was divided between those who plowed the land, those who harvested, those who polished the stones , the gatherers, those who work the ceramics and used the looms -mainly women- , those who built the houses and those who looked after the livestock. It is necessary to mention the entry into the scene of the surplus. From its appearance, it is possible to exchange goods . This first type of trade is called barter.

Due to the practice of farmers, a special relationship with the land is lived . She represents the “Mother-Goddess”, fertility, the cycle of life and death.

This phenomenon is also a product of agriculture . The work of farmers requires a lot of effort and time, and makes sense with the premise that this land, initially unproductive, will bear fruit for them.